RECOVERING
[+]Enlarge
Credit: Jean-François Tremblay
Debris from the March 11 tsunami is collected at the Kashima harbor. The petrochemical complex is visible in the background. 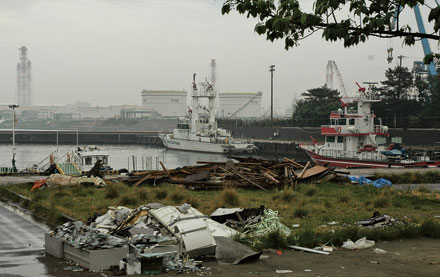 Credit: Jean-François Tremblay
Debris from the March 11 tsunami is collected at the Kashima harbor. The petrochemical complex is visible in the background.

On March 11, production facilities at Japan’s largest petrochemical complex, in Kashima, about 50 miles northeast of Tokyo, were flooded by tsunami waves. The waves weren’t as high as in the Tohoku region farther up the coast, but the 3 feet of seawater that ran through the complex was enough to halt operations at many plants at the site. Of Japan’s major chemical production sites, Kashima was the hardest hit by the spring catastrophe.

Despite damaged roads, crippled power plants, and unusable shipping berths, Kashima is bouncing back fast. Feverish efforts by workers at the site over the past two months should allow the whole petrochemical complex to be more or less back in operation by early this summer.

Throughout the Japanese chemical industry, the damage inflicted by the March 11 earthquake and tsunami is quickly being erased. A greater challenge for many Japanese chemical companies will be to maintain operations during the severe power shortages expected this summer.

Within a year or two, the Great East Japan Earthquake, as it is called in Japan, will be a nearly forgotten blip in the history of the country’s chemical industry, predicts Nobu Koshiba, president of the rubber and electronic materials producer JSR. His firm’s facilities came through the catastrophe nearly unscathed, even though some are located in Kashima. JSR’s Kashima facilities escaped, Koshiba says, because the company had almost completed a program of strengthening its infrastructure precisely for the purpose of better withstanding an earthquake.

But if damage to Japan’s chemical companies was modest, the impact on one of their important customers, the global electronics industry, was not. “This is the broadest and deepest impact the electronic supply chain has ever experienced in its history,” said Dale Ford, senior vice president of market intelligence at the electronics market research firm IHS iSuppli during a webinar last month. Outages at a handful of Japanese producers of electronics chemicals have had repercussions throughout the electronics industry—and beyond to sectors such as auto manufacturing, Ford said.

For instance, Shin-Etsu Chemical’s silicon wafer plant in Shirakawa, located relatively close to the earthquake’s epicenter, has yet to restart production. The facility, the world’s largest wafer plant, supplies all the Japanese semiconductor producers as well as international customers such as Samsung and Taiwan Semiconductor Manufacturing Co., Ford noted.

Highly pure hydrogen peroxide, used as a cleaning agent by semiconductor producers, remains in tight supply because of outages at Japanese companies such as Mitsubishi Gas Chemical, which manufactures peroxide in Kashima, Ford added. At the time of the webinar, polyvinylidene fluoride resin, used to produce batteries for laptop computers and cell phones, was also in short supply owing to the shutdown of a plant operated by Kureha in Fukushima prefecture, where the damaged Fukushima Daiichi Nuclear Power Station is located. Kureha announced on May 9 that it has restarted production at the plant.

Despite the strain that these outages have inflicted on manufacturers of electronic components, few chemical suppliers will respond by setting up alternative production bases outside Japan, predicts Ryota Hamamoto, a veteran of the Japanese chemical industry who is now senior executive adviser at the consulting firm Accenture.

“Disasters of this scale don’t recur even every 50 years,” Hamamoto argues. “Over time, Japanese suppliers have established themselves as preferred suppliers because of their reliable deliveries and the quality of their materials. And they are now working around the clock to rehabilitate the supply chain.”

Unless the outages continue, buyers will not turn to suppliers in other countries, Hamamoto says. And once production returns to normal, he believes, purchasers of electronic materials will not insist that their Japanese suppliers set up plants offshore. On the whole, Hamamoto points out, damage to Japanese chemical facilities was relatively light.

At Mitsubishi Gas Chemical, spokesman Atsushi Shibata tells C&EN that he is unaware of customer pressure for MGC to build more plants outside Japan. The electronics industry was shaken when an MGC plant producing half of the world’s supply of bismaleimide triazine resin, which is used in the manufacturing of printed circuit boards, was knocked out of commission by the earthquake. The plant, in Fukushima, restarted production in early May.

At JSR, a major supplier of materials to the semiconductor and flat-panel display industries, Koshiba sees no need to set up more plants in other countries. In addition to already being geographically diversified, he notes, JSR always maintains inventory of two months’ worth of finished products and raw materials.

Improving the resilience of the supply chain is by itself a poor motivator for Japanese electronics materials suppliers to set up facilities outside the country, says Tetsuo Nishide, director general of the Japan Chemical Industry Association. “If they supply their materials primarily to Japanese components makers, and those components makers move outside Japan, then the materials makers may follow,” he concedes. 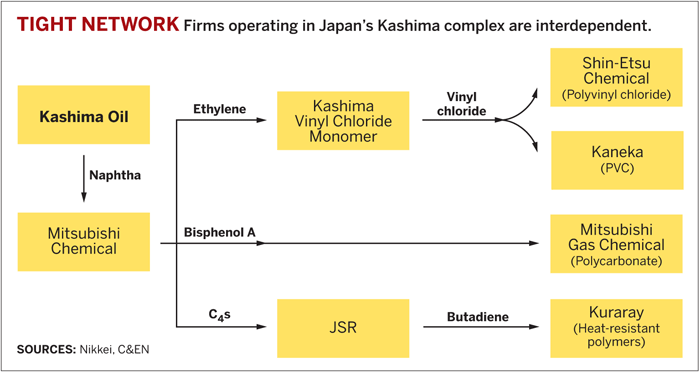 More than pressure from customers to diversify beyond Japan, the availability of electricity in Japan will concern Japanese chemical suppliers in coming months, Nishide says. “It won’t be that much of a problem for plants operating in petrochemical complexes like Kashima that generate their own power, but facilities depending on the grid may be severely affected,” he says.

The tight electricity situation is the result of the shutdown of nuclear power stations in Fukushima and in Hamaoka, southwest of Tokyo near a tectonic fault line. In addition, a few other nuclear power plants are shut down for maintenance or safety inspections.

On April 18, the Japanese government and Tokyo Electric Power, operator of the Fukushima reactor, warned chemical producers buying power from the grid to plan for a 25% reduction in their consumption in July and August when air-conditioning usage reaches a peak in Japan.

In the middle of May, because conventional power plants were being brought back on-line and electricity users throughout Japan had found ways to conserve, the government revised its warning and said chemical companies will have to reduce their power consumption by only 15%.

Even at 15%, the power squeeze will be a major headache, Nishide cautions. Chemical plants that use continuous processes can’t start and stop their production at will, depending on power availability, he says.

“Facilities that cannot reduce their energy consumption may have to simply stop producing during that period,” he says. Other Japanese chemical producers will cope, as much as they can, by reducing production in the daytime and building up inventory before the summer power outages. Firms that operate multiple plants in Japan can also shift production to the south of the country where power is more abundant, he adds.

Tightness of the power supply could extend into the summer of 2012, Nishide says, but is unlikely to. Some chemical producers will set up their own generation equipment to cope with power uncertainties, he adds. This will be possible because the government is temporarily relaxing environmental compliance requirements during the postearthquake period. And nuclear power plants that have been shut down for safety inspections may be allowed to restart.

It’s unclear whether the earthquake will ultimately act as a giant stimulus package for Japan’s chemical industry, Nishide says. On the one hand, reconstruction of the country’s Tohoku region will require massive amounts of building materials. On the other hand, owing to power shortages and outages at component plants, Japan’s auto output will likely shrink, taking demand for polymers and other chemicals used by the automotive industry down with it.

Faced with unclear demand conditions and reduced power supply, many major Japanese chemical companies are uncertain about their prospects for the coming year. In announcing results for fiscal 2010, which ended on March 31, several firms stressed that their financial forecasts should not be considered as reliable as in past years. Shin-Etsu, which is in the process of resuming production at a damaged polyvinyl chloride plant in Kashima and is struggling to restart the silicon wafer facility in Shirakawa, refrained from making a forecast at all.

However traumatic the spring catastrophe was for Japan, for the country’s chemical sector it will likely prove to be an insignificant event in the long haul. If anything, it will simply provide one additional motivation for the industry’s continued internationalization, which was already well under way when the earthquake struck.