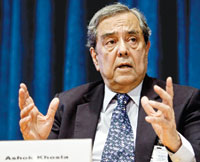 To foster sustainability, the world’s economy needs to do a lot more with a lot less, according to a new report from the United Nations. At the same time, pollution and ecological destruction from extracting and using natural resources must decline, the report says.

Driving the need for these changes is the growing global appetite for a smorgasbord of resources: fossil fuels, metals including rare-earths, water, fertile soil, and construction supplies such as cement.

“Global resource consumption is exploding. It’s not a trend that is in any way sustainable,” says Ernst U. von Weizsäcker, cochair of the International Resource Panel (IRP), which produced the report. “Prosperity and well-being do not depend on consuming ever-greater quantities of resources,” says von Weizsäcker, who is also dean of environmental science and management at the University of California, Santa Barbara.

Formed by the UN Environment Program (UNEP) in 2007, IRP is composed of researchers who are providing independent scientific assessments about the sustainable use of natural resources and the environmental impacts of their use. It is analogous to the Intergovernmental Panel on Climate Change.

The report, released on May 12 in conjunction with the UN Commission on Sustainable Development’s annual meeting, explores what IRP calls “decoupling.” The panel applies this term to separating the rate of economic activity from the rates of resource use and environmental degradation.

One goal of decoupling is to use fewer resources per unit of economic output—for instance, requiring less energy, water, or land for a set amount of industrial or agricultural production. A second goal is to shrink the environmental impact of resource use of an economic activity, such as reducing pollution from mining operations or curbing carbon dioxide emissions from transportation. Decoupling, the report points out, is not the same as an absolute reduction in uses of resources.

In essence, decoupling is about replacing debt-financed consumption with sustainability-oriented investments in innovation as the primary driver of the world’s economy, explains Mark Swilling, a lead author of the IRP decoupling report.

Some decoupling takes place as a part of economic evolution. For example, over the past century, the global economy grew faster than the use of resources. The world saw an eightfold increase in use of resources while, overall, gross domestic product rose 25-fold, says Swilling, who is academic director of the Sustainability Institute at the University of Stellenbosch, in South Africa.

Innovation in the private sector helps decouple economic progress from the need to use more resources, Swilling says. But achieving sustainability will necessitate additional efforts, he adds.

“Decoupling will require significant changes in government policies, corporate behavior, and consumption patterns by the public,” the report says. But the report doesn’t suggest options for new policies and technologies. Those will come in other IRP publications, including one on metals (see page 9).

The panel is preparing future reports on how to apply the concept of decoupling to a number of key areas: technologies to curb emissions of greenhouse gases, recycling, land and soil, and water. The panel’s work is part of UNEP’s Green Economy Initiative, which aims to link a revived world economy to reductions in ecosystem degradation, water scarcity, and dependence on fossil fuels.

Decoupling the world economy from resource uses and their impacts is “profoundly important for life on Earth,” says Ashok Khosla, cochair of IRP and president of the International Union for the Conservation of Nature. There will be “devastating consequences” if the world fails to act on this issue, Khosla said.

The report is available online at unep.org/resourcepanel.