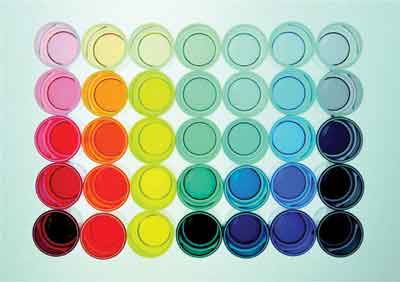 Through some 10 years of systematic structure-property development, chemists at the University of Florida have manipulated the composition of thiophene-based electrochemical polymers to create the first set of soluble materials that exhibit the whole gamut of colors possible. This achievement in color-changing polymers is a scientific milestone that is expected to spark development of a greater variety of low-cost organic electronic displays and tinted window applications.

“By using electron-rich and donor-acceptor repeat units, electron-donating substituents, steric interactions, and solubilizing pendant groups, we have been able to color-tune our 3,4-alkylenedioxythiophene family of polymers to complete the color palette of fully solution-processable materials,” says Florida chemistry professor John R. Reynolds, whose group carried out the research.

Electrochromism is the property of certain materials to reversibly change their light-absorption profile—that is, change color—when an electric field is applied or an electrical charge is imposed through oxidation or reduction. Electrochromic materials typically are thin films of metal oxides such as tungsten trioxide, soluble organic molecules such as viologens, and π-conjugated conducting polymers such as polyaniline and polythiophene.

Early work on conducting polymers in the 1970s led to materials that switched between two or more colored states, such as blue and red, on oxidation and reduction. Donor-acceptor π-conjugated polymers of this type are already used to make a variety of organic-based electronic devices, including field-effect transistors, photodetectors, solar cells, and light-emitting diodes. But to be useful in non-light-emitting display applications the polymer must switch from a reflective color to an essentially colorless, transmissive state. Multicolored electrochromic polymers don’t do that, so they have been ineffective for display applications.

Reynolds’ group and many others realized they could design polymers that meet all the needs for displays: colorful in the oxidized state but nearly colorless in the reduced state and soluble for easy processing.

“Now that color choice is available across the whole visible spectrum, it should be possible to develop a full range of applications in controllable light-reflective or light-transmissive display devices for optical information and storage,” Mortimer says.

Because these are spray-processable polymers that operate at low electrical power, they can be easily deposited as thin films over large areas or finely printed into individual pixels, making device scale-up and patterning easier, he adds. “In display applications, there is potential for using electrochromism for e-readers, e-paper, sign­age, reusable price labels, and devices for frozen-food monitoring,” Mortimer notes.

Achieving the variety of colors needed has required a range of polymer designs, Reynolds explains. To obtain colors at longer wavelengths, somewhat simple polymer structures are required. His orange polymer, for example, is just an alkoxy-substituted polythiophene. The magenta version is an alkoxy-substituted 3,4-propylenedioxythiophene, a monomer Reynolds calls ProDOT. To achieve red, the researchers made a copolymer of two different alkoxy-substituted ProDOTs, and to get yellow they turned to a ProDOT-phenylene copolymer.

When it comes to colors at shorter wavelengths, the required structures become more complex, Reynolds says. The blue, cyan, and green versions are different types of bulkier ProDOT-benzothiadiazole polymers.

The Florida team builds the aromatic monomer units through standard types of chemical reactions, Reynolds notes. The researchers then generate the polymers by oxidative methods using reagents such as FeCl3 or by Suzuki coupling and Grignard metathesis polymerization.

Beyond the standard colors of the rainbow, black is also required for many display applications such as electronic readers and in tinted automotive and architectural windows, Reynolds says. But developing a soluble polymeric material that switches from a deep and highly absorbing black to colorless and transparent under a wide range of viewing angles and most lighting conditions took some extra thought, he notes.

To achieve black, the electrochromic polymer has to strongly absorb light across the entire visible range, from 400 to 750 nm. With the full color palette, the various colors combined cover that range, which gave Reynolds’ group the idea that a black polymer might be possible by randomly incorporating a combination of different chromophores along a polymer chain. The Florida researchers found two sets of combinations to accomplish that.

Reynolds and his coworkers are not in the business of developing and building commercial-ready electronic devices—they are happy to leave that to others. But they do make “platform devices” that allow them to test how the polymers behave in order to optimize their properties.

Rainbow Extravaganza
[+]Enlarge
Credit: ACS Appl. Mater. Interfaces
Polymer solutions, illuminated from underneath, can be adjusted to different shades of color by increasing the polymer concentration.

Credit: ACS Appl. Mater. Interfaces
Polymer solutions, illuminated from underneath, can be adjusted to different shades of color by increasing the polymer concentration.

The Florida researchers have found that spray casting films on conducting glass electrodes using commercially available airbrush paint sprayers is a convenient way to go. Ink-jet printing works just as well, Reynolds says. They also have demonstrated simple patterning of the electrochromic films by spraying solutions through masks. By masking different areas of a pattern at different times, multicolored layered films that have a variety of shades and tones are possible.

Typically their polymers are solution processable from common volatile organic solvents. But with a thought toward creating more environmentally friendly materials, and more versatile ones as well, Reynolds and his team considered how to avoid organic solvents and develop water-soluble versions. To that end, they developed methods that allow the synthesis, purification, and analytical testing of the polymers in organic solvents, followed by defunctionalizing the alkyl or alkoxy substituents to yield water-soluble carboxylates without affecting the color.

Reynolds believes it’s just a matter of time before commercial applications are under way. The University of Florida has carried out the research under the sponsorship of the Air Force Office of Scientific Research along with BASF, and has trademarked the ProDOT family of polymers as SprayDOTs.

Reynolds and his team are feeling a great sense of accomplishment for completing the color palette.

“Because scientific research always leads to new questions, very rarely do you come to a point where you can actually say, ‘I have completed something,’ ” Reynolds observes. “Although we still have many new questions we are addressing on electrochromic polymers that have to do with fine-tuning material performance and solubility, we have come to a completion point on the color scheme so that we now have all we need to make full electrochromic displays.” 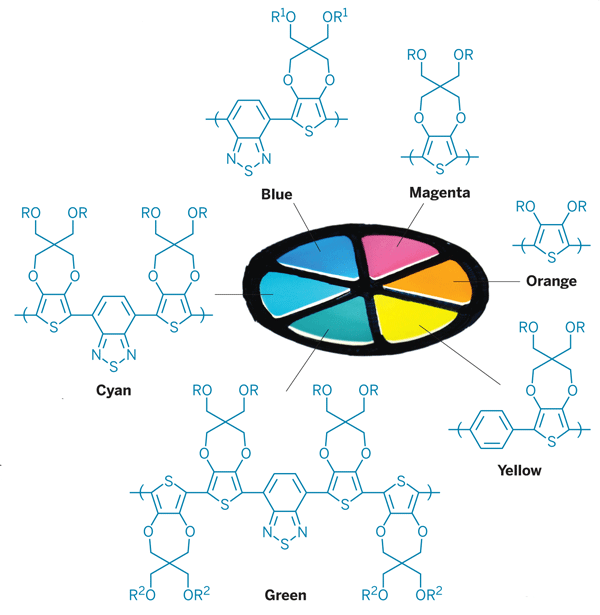