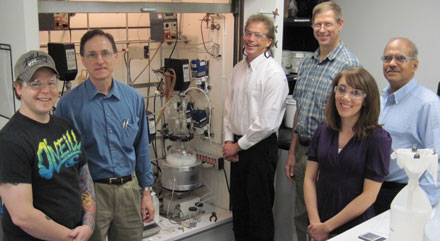 Like many manufacturers of chemical products, Sherwin-Williams is concerned about the high cost and future availability of petroleum-based raw materials, says Madhukar (Duke) Rao, the company’s director of polymers and materials technology. In addition, increasingly stringent regulation of VOC emissions is necessitating changes in paints and coatings formulations for architectural and industrial uses, Rao notes.

The search has been on for new technology that incorporates alternative raw materials that help manage costs and reduce VOCs, but yield paints that still match the performance of the best existing products, Rao says.

Alkyd paint has been around for about 80 years, Rao notes. It’s traditionally made from an oil-based polyester such as PET, using soybean or other vegetable oils and different polyols and carboxylic acids. Solvents such as mineral spirits or xylenes are used to lower viscosity. Alkyd paints are prized for their smooth finish and attractive gloss.

In the 1950s, acrylic-based waterborne latex emulsions with better stability and shelf life came along and began displacing solvent-based alkyd paints, he says. “But there continues to be a technology void where a latex can’t give the same performance characteristics such as application and gloss of the finish as an alkyd, which contractors and do-it-yourself users really like,” Rao says. “Another development in the past 20 years is the concern over the safety of VOCs. So there is a drive now toward developing waterborne chemistry to match the performance of alkyd systems but that reduces the amount of VOCs.”

To meet that need, Sherwin-Williams researchers decided to try to combine the best of alkyd and latex chemistries in a hybrid water-based acrylic alkyd (WBAAT) system. This technology produces paints with alkyd properties that can be cleaned with water and have less odor than currently available latex or alkyd materials.

Sherwin-Williams’ WBAAT paints are created in a multistep process. It begins by controlled digestion of recycled PET using a tin catalyst and a soybean fatty acid, Rao explains. The resulting fatty acid-terminated PET oligomeric particles are then repolymerized to form an alkyd by reaction with polyols and carboxylic acids.

The alkyd backbone is next functionalized with hydrophobic and hydrophilic acrylic monomers by graft polymerization using soybean oil as a solvent, Rao notes. This soy-PET acrylic-alkyd polymer is then dispersed in water by using an amine to form an anionic alkyd with ammonium counterions, which under high-shear mixing forms an oil-in-water emulsion, he says.

The paint’s hydrolytic stability and durability are important, Rao says, because Sherwin-Williams paints are distributed to hundreds of stores in several different climate zones. Plus the paint needs to avoid phase separation over time to remain usable.

WBAAT sidesteps the use of surfactants typical of latex systems and uses minimal amounts of traditional organic solvents. About 60% of the components are derived from renewable and recycled materials, Rao adds. And the technology significantly improves shelf life from about one year to up to three years without loss of performance.

Federal rules cap paint VOCs at 250 g/L for flat finishes and 380 g/L for other finishes. But manufacturers are being pressed to comply with tighter regional rules. For example, California’s South Coast Air Quality Management District has a VOC limit of 50 g/L for all finishes. And the Ozone Transport Commission, a multistate organization in the northeastern U.S. created under the Clean Air Act, has a rule limiting VOCs in flat coatings to 100 g/L and in other finishes to 150 g/L.

To meet those requirements, Sherwin-Williams launched WBAAT in the U.S. in 2010 with three products, and the company has more products in the pipeline. ProClassic smooth enamel finish is a water-based acrylic alkyd semigloss system comparable to traditional oil-based coatings used for trim on doors, cabinets, and custom woodwork for residential and commercial interiors. It’s formulated to generate less than 50 g/L of VOCs. ProMar 200 interior water-based acrylic alkyd semigloss paint is geared toward commercial paint contractors and emits less than 100 g/L of VOCs. And ProIndustrial Waterborne Alkyd Enamel is designed for humidity- and corrosion-resistant high-gloss metal primer and topcoat applications.

WBAAT significantly outperforms traditional alkyd paints with its lower VOCs and durability, according to Sherwin-Williams comparative analyses. And it matches traditional paints in application, gloss, and adhesion. Although the paints cost about 20% more than traditional paints, Rao says, they offer improved performance and exceed the most stringent environmental regulations.