UBIQUITOUS MICROBE
[+]Enlarge
Credit: Centers for Disease Control and Prevention
Nearly half of tap water contains free-living amoebas, such as this Acanthamoeba. 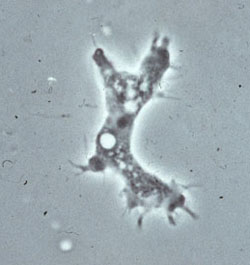 Credit: Centers for Disease Control and Prevention
Nearly half of tap water contains free-living amoebas, such as this Acanthamoeba.

In industrialized nations, people expect their drinking water to be pathogen free, thanks to treatment facilities that filter and disinfect the water. However, after reviewing 26 studies from 18 countries, two scientists conclude that some amoeba species called free-living amoebas (FLA) consistently survive these treatments and quickly multiply in drinking-water distribution and storage systems (Environ. Sci. Technol., DOI: 10.1021/es102876y). Given their potential to spread disease, these microbes are a human health risk that demands further study, the researchers say.

FLA are protozoa that live independently in water or soil, without the need of a human or animal host. Some FLA can cause fatal diseases such as meningoencephalitis, an infection of the brain. The microbes also host other pathogenic microorganisms, such as Legionella and Mycobacterium. These so-called amoeba-resistant microorganisms avoid digestion by the amoeba and replicate successfully within it. The amoeba helps these bacteria grow in numbers and can increase their virulence, says Jacqueline Thomas, a doctoral student at the University of New South Wales, in Sydney, Australia. She thinks that to control the other microbes, researchers need to understand more about the persistence of the amoebas.

Thomas and Nicholas Ashbolt, a scientist with the Environmental Protection Agency's National Exposure Research Laboratory, reviewed drinking-water studies from Europe, the Middle East, the Americas, and Asia to determine the abundance of amoebas. They report that researchers found FLA in 45% of tap water samples. In 19 of the 26 studies, the amoebas were in every tap water sample collected.

Thomas and Ashbolt point out that most people develop resistance to the amoebas and bacteria in the local drinking water. But children under the age of five, people with compromised immune systems, and the elderly are more vulnerable to these microbes. In the U.S., outbreaks of Legionnaire's disease—caused by Legionella bacteria—have been traced to infected plumbing in hospitals and geriatric facilities, Ashbolt says. "Legionella can colonize hot water systems in these buildings," he says. "They're not easy to completely eradicate, because Legionella live in cysts within amoebas, and are protected."

Thomas says there are likely no simple answers to controlling FLA. In the U.S., developing new regulations for water treatment facilities would take years, according to Eloise Eccles, a water systems engineer with the Portland, Ore. Water Bureau. Eccles also notes that currently no single disinfectant is equally effective against FLA and other known pathogens such as Giardia. Ashbolt thinks that the best way to control the issue may be to change plumbing codes at the local municipality level.

Pollution
Measuring microplastics in seafood
Persistent Pollutants
US FDA sets voluntary arsenic limit in infant rice cereal
Persistent Pollutants
Goodbye to some PFAS in food packaging
Share X
To send an e-mail to multiple recipients, separate e-mail addresses with a comma, semicolon, or both.
Title: Amoebas Found In Treated Drinking Water Worldwide
Author: Emily Gertz
Chemical & Engineering News will not share your email address with any other person or company.