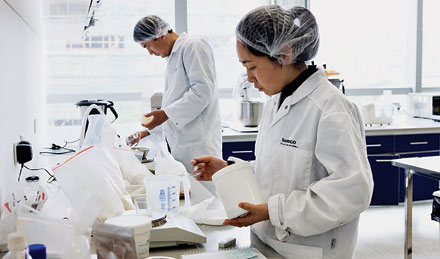 Credit: Danisco
In 2008, Danisco opened a $5 million sales and research center in Shanghai.

DuPont has signed a definitive agreement to buy the enzyme and food ingredient firm Danisco for $6.3 billion. The deal will enhance DuPont’s industrial biotechnology efforts and take it into new businesses related to food and energy.

DuPont plans to finance the purchase with $3 billion of cash on hand and the rest in debt. Danisco shareholders will realize a 25% premium for their shares, based on their Jan. 7 closing price. The two firms expect to close the deal in April or May, pending shareholder and regulatory approvals.

The merger will bring together Copenhagen-based Danisco, with annual sales of $2.4 billion and 7,000 employees, and DuPont, a diversified U.S. chemical and materials maker with more than $26 billion in sales. Through its Genencor subsidiary, Danisco is the world’s second-largest maker of industrial enzymes, after Novozymes. It’s also a leading producer of food stabilizers, cultures, and sweeteners.

Danisco will mark DuPont’s first major acquisition since it bought seed and plant genetics firm Pioneer Hi-Bred in 1999 for $7.7 billion. The deal is also CEO Ellen J. Kullman’s first big transaction since she stepped into the top spot at the company in 2009. Danisco, Kullman said, “is a perfect strategic fit with our growth opportunities.” She added that Danisco “will help us solve global challenges presented by dramatic population growth in the decades to come, specifically related to food and energy.”

Discussions with DuPont and other bidders for Danisco had been going on for several months, Danisco Chairman Jørgen Tandrup said during a press conference after the deal’s announcement. Press reports indicate that a recent offer from Belgian chemical maker Solvay intensified the biddings, but Solvay declined to comment. Last year, Solvay sold its pharmaceutical business to Abbott Laboratories for $7.6 billion. DSM, another chemical firm, was also mentioned in reports as interested. DSM owns a 5% stake in Danisco that it will sell to DuPont at a $170 million profit.

Tandrup declined to identify other bidders, but he did say several firms continued to bid for Danisco up until the last moment. DuPont won the auction because it offered both “the best price and the best fit,” he said.

Danisco and DuPont are by no means strangers. The two have a joint venture, called DuPont Danisco Cellulosic Ethanol, which recently set up a biofuels demonstration facility in Vonore, Tenn. They also have a relationship through Genencor, which Danisco acquired in 2005. Going back a decade, DuPont and Genencor have worked together developing fermentation organisms to convert sugars from starch and cellulose into ethanol and the textile fiber feedstock 1,3-propanediol.

In a conference call with analysts, DuPont’s Kullman said Danisco will add essential capabilities in enzymes and fermentation and reinforce DuPont’s move into high-growth, sustainable businesses. She characterized Danisco’s food ingredient businesses, which makes up two-thirds of the firm’s sales, as attractive, market-driven units that fit well with DuPont’s capabilities and direction.

Laurence Alexander, a stock analyst with investment banking firm Jefferies & Co., told clients that Danisco’s businesses will help DuPont “transform and revive its portfolio.” Danisco is an especially significant acquisition, he said, because DuPont “has been the most vocal large company concerning the opportunities in industrial biotechnology.”

DuPont is already a prominent player in the seed market because of Pioneer Hi-Bred, Alexander said, and Danisco will fill gaps in DuPont’s “farm to fork” agriculture and nutrition strategy. The deal, he noted, will likely reduce DuPont’s earnings volatility and exposure to petrochemical feedstocks. And “close partnerships with Danisco over the past decade should help reduce integration risk,” he added.