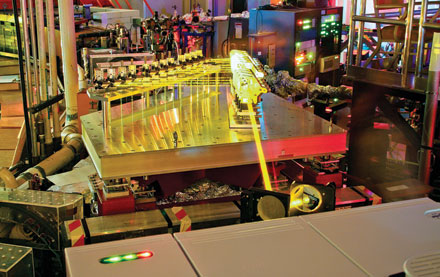 Most analytical techniques can provide a snapshot of the average behavior of a group of cells. For example, scientists grind cells and measure levels of gene transcripts to monitor how cellular circuits turn on and off, or they use mass spectrometry to identify natural products in a bacterial colony. But these average snapshots can miss rare cells—those few that behave differently from the rest, according to Hoi-Ying N. Holman, a staff scientist at Lawrence Berkeley National Laboratory (LBNL). Details about these cells often fail to rise above the noise of the majority, but studying them could help researchers understand how cells respond differently to changes in their environment.

Now, spectroscopists can break through that noise, focus on the unique cell, and study it in real time by using a technique that combines conventional infrared spectroscopy with the extraordinarily bright light produced by a synchrotron—best known as a source of X-rays for crystallography. At last month’s 6th International Chemical Congress of Pacific Basin Societies, or Pa­cif­ichem, held in Honolulu, Holman and others described what they are learning from the method, as well as recent advances that are expanding the technique’s usefulness.

“We’re finding that when you zoom down to individual cells, they actually respond differently,” said Michael Martin, a staff scientist at LBNL’s Advanced Light Source.

IR spectroscopy of cells isn’t new: Its popularity with biologists spiked in the 1990s with the development of commercial instruments for Fourier transform IR spectromicroscopy. These devices focus IR radiation from a heated silicon carbide rod through a microscope’s objective to enable spectroscopy of microscopic samples.

But when researchers began using synchrotron light as their IR source starting about a decade ago, it became possible to focus on individual cells instead of collections of them.

Synchrotrons use powerful electromagnets to accelerate electrons around a ring. As they accelerate, the electrons give off energy as photons, with wavelengths ranging from the X-ray to the IR region. Compared with IR radiation from a SiC rod, the synchrotron’s light beam is about 100 to 1,000 times as bright, packing more photons in a given area and allowing spectroscopists to focus IR radiation on smaller spots without sacrificing the resolution of spectra.

“The goal is getting that spot size on the order of the thing you’re trying to measure,” Martin said. The size limit for FTIR spectromicroscopy with synchrotron light is about 2 to 10 μm—larger than most prokaryotic cells and smaller than eukaryotic cells—and a conventional IR source’s limit is about 100 μm.

That small spot size allowed Holman to study how individual anaerobic bacteria cling to life when exposed to air. Sulfate-reducing bacteria, such as Desulfovibrio vulgaris, use sulfate instead of oxygen in their metabolism and play a crucial role in the geochemistry of the deep sea, salt marshes, and other anaerobic environments. Although these environments usually lack oxygen, brief exposures aren’t uncommon. When Holman exposed rapidly growing D. vulgaris to air, only 10% of the bacteria survived.

To understand how the survivors’ biochemistry changed to deal with oxygen, Holman decided to focus mainly on the region of IR spectra that corresponds to the hydrogen bonds that form between water molecules. From other researchers’ IR studies of water, Holman knew that the bond vibrations of water change subtly when other molecules, such as simple organic acids and radicals, disrupt the liquid’s structure.

By examining how the water signals changed over time, the researchers concluded that the microbes survived by reducing oxygen into water while oxidizing polyglucose into acetate, which is then oxidized further to carbon dioxide (Proc. Natl. Acad. Sci. USA, DOI: 10.1073/pnas.0902070106). The microbes that didn’t survive the exposure to air lacked stores of polyglucose and quickly accumulated toxic reactive oxygen species, such as superoxide radicals.

Although Holman’s team pinpointed only specific IR signals in their study, Philip Heraud, a research fellow at Monash University, in Australia, and colleagues analyzed every feature of the IR spectra they collected to identify the stage that differentiating stem cells had reached.

If stem cell therapies reach the clinic, doctors will need to ensure that the cells they inject into patients are all at the proper stage of development, Heraud said. Cells that haven’t differentiated enough can lead to benign tumors called teratomas. Current methods to check a stem cell’s developmental stage include using fluorescent reporter genes, which can perturb cells, or detecting changes in cell shape, which isn’t compatible with high-throughput screening.

To show that synchrotron-based IR spectroscopy could provide an alternative, Heraud and his colleagues first performed a proof-of-principle experiment with a conventional IR source. They collected spectra of dried stem cells at three different stages and then fed their data into a statistical program that identified signals unique to each stage. The program could then apply these spectral signatures to classify new cells’ stages by their spectra. Heraud reported that his team could correctly assign a cell’s stage of development 97% of the time (Stem Cell Res., DOI: 10.1016/j.scr.2009.11.002). The researchers are currently expanding their system to enable analysis of living stem cells with a synchrotron IR source.

Meanwhile, advances in synchrotron instrumentation are boosting researchers’ productivity. For example, according to Kathleen Gough, a professor at the University of Manitoba, a new system at the University of Wisconsin, Madison’s Synchrotron Radiation Center—called the IR environmental imaging (IRENI) beamline—allows researchers to collect thousands of spectra simultaneously.

Normally, it takes about 15 seconds to obtain a spectrum by synchrotron-based IR spectroscopy. To study a slice of tissue or a cell larger than the tiny IR spot, such as a nerve or algal cell, one needs to focus the synchrotron IR radiation at various spots on the sample and collect spectra one spot at a time, a process that takes significant amounts of time. “If I wanted to look at a single algal cell, which is 100 by 100 μm, it would take me three hours to measure it,” said physics professor Carol Hirschmugl of the University of Wisconsin, Milwaukee, who designed the IRENI system. A lot of cellular changes are missed in three hours, she adds.

Hirschmugl and colleagues developed IRENI to speed up the process. IRENI uses multiple IR beams to create an image of a 50- by 50-μm area of the sample with more than 9,000 pixels, each consisting of a high-resolution IR spectrum. With IRENI, Hirschmugl can study one algal cell in five minutes, instead of a few hours.

Gough hopes to use IRENI to understand how different environmental changes such as diet or drug treatments affect amyloid plaque formation in mouse brain tissue.

Thanks to advanced capabilities such as IRENI, the spectroscopists at Pacifichem described synchrotron-based IR spectroscopy as a growing field. Since 2000, the number of IR beamlines worldwide has grown from six to 33. The key for future growth, the presenters said, is to teach biologists who are unfamiliar with IR spectroscopy and synchrotrons about the combined technique’s strengths and limitations, as well as how to properly interpret the data.