A New Feat For Gold Catalysts 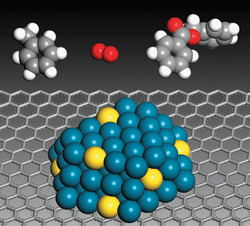 Nanoparticles made of a gold-palladium alloy can selectively catalyze oxidation of the primary carbon-hydrogen bonds in toluene’s methyl group and related compounds, according to a study published by researchers at Cardiff University, in Wales (Science, DOI: 10.1126/science.1198458). The investigation may lead to new commercial catalytic processes that are less expensive and free from the acidic and chlorinated solvents used in some industrial reactions today. The study also provides new leads in the broad search for methods to efficiently transform raw materials such as methane into valuable products.

The recent spike in gold-based catalysis research has uncovered a host of surprising findings showing that the generally inert precious metal can be a highly active catalyst when prepared in nanoparticulate form (C&EN, May 10, 2010, page 42). The Cardiff group, for example, which is led by Graham J. Hutchings, showed nearly two years ago that H2 and O2 can be combined directly to produce hydrogen peroxide on the surface of Au-Pd nanoparticles (C&EN, Feb. 23, 2009, page 8). The new study shows the particles to be versatile catalytically.

By using a colloid immobilization method, the group, which also includes Lokesh Kesavan and coworkers at Cardiff and at Lehigh University, prepared a series of carbon- and TiO2-supported catalysts in the 2- to 5-nm-diameter range with a variety of Au-to-Pd ratios. They evaluated the catalysts’ facility to oxidize toluene with oxygen and found some that actively and selectively transformed the reactant’s primary C–H bonds under mild and solvent-free conditions. For example, several catalysts with a Au-to-Pd ratio of 1:1.85 produced mainly benzyl benzoate (>90% selectivity) and small amounts of benzyl alcohol, benzaldehyde, and benzoic acid.

“This new example of selective oxidation of toluene by gold-palladium catalysts with molecular oxygen is another addition to the exciting story of catalysis by gold,” says Mayfair C. Kung, a catalysis specialist at Northwestern University. She adds that the results suggest the possibility that other supported bimetallic gold catalysts may one day be found capable of challenging catalytic feats, such as selectively activating linear alkanes at a terminal position.