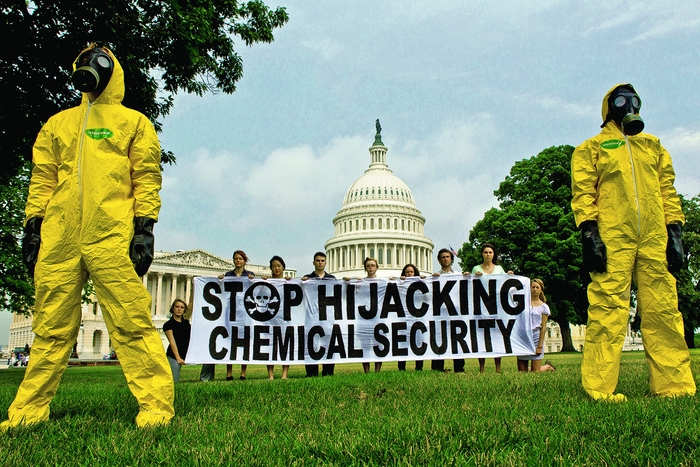 Industry leaders are calling on Congress to quickly approve a multiyear extension of the Department of Homeland Security (DHS) antiterrorism program for chemical facilities, which expires later this year. Chemical manufacturers need assurance that the billions of dollars they are currently spending to upgrade security will continue to meet the government’s regulatory requirements years into the future, industry officials say.

“We are now at the point in the legislative process in which our biggest threat is complacency,” Lawrence D. Sloan, president of the Society of Chemical Manufacturers & Affiliates (SOCMA), an industry trade group, told reporters earlier this month during a two-day conference in Baltimore. Nearly 700 people from the chemical industry, government, academia, and the security arena attended the 2011 Chemical Sector Security Summit, an annual event funded by DHS and SOCMA.

Sloan noted that two committees in the House of Representatives have passed legislation to reauthorize DHS’s Chemical Facility Anti-Terrorism Standards (CFATS) program for seven years, and a Senate panel has approved a three-year extension. “We risk having these bills pass only to allow them to fall victim to the legislative calendar and default to another one-year extension,” he remarked.

In 2006, Congress gave DHS three years to establish a federal security program for facilities that make, use, or store large amounts of hazardous chemicals. Initially, DHS’s authority was set to expire on Oct. 4, 2009, a deadline for Congress to pass a permanent, comprehensive program.

But lawmakers have been unable to agree on how to structure CFATS for the long term and have instead continued the statutory authority for the program through the annual appropriations process. Under the most recent extension, that authority is scheduled to expire on Oct. 4.

Sloan said there is urgency to pass legislation by Sept. 23, after which the House and Senate will recess until Oct. 3.

“This need for annual reauthorization of CFATS has created uncertainty for facilities regulated by CFATS,” he said. “This is no way to run an important government program. Without the assurance of a long-term authorization of these regulations, companies run a risk of investing in costly activities today that might not satisfy regulatory standards tomorrow.”

Since 2001, chemical manufacturers have spent more than $8 billion on facility security enhancements, according to industry officials.

Sloan said he is concerned that if Congress waits and passes another one-year extension of the chemical security rules this fall, then “not much is going to happen and CFATS will become a back-burner issue.” Lawmakers will become preoccupied with other issues, he predicted, and will quickly transition into campaign mode next year as the national elections approach.

That would create the likelihood of another one-year extension in 2012, Sloan said, meaning another effort to pass a longer term reauthorization would not occur until 2013. 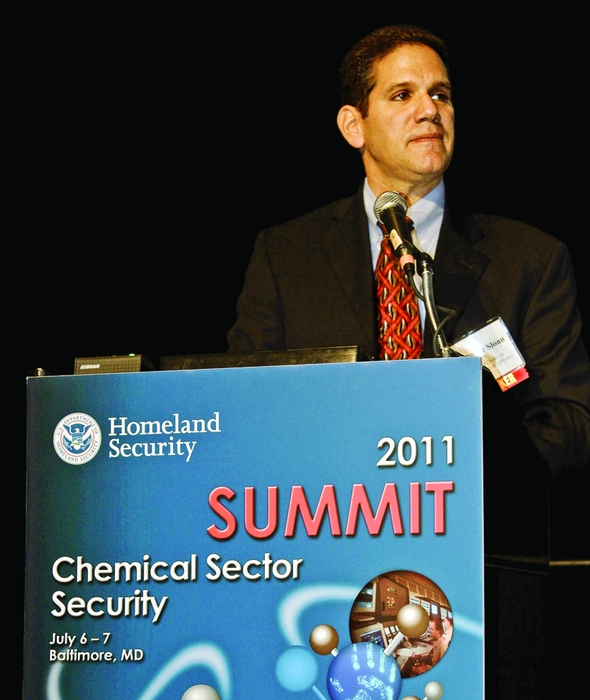 At the security summit, a panel of congressional staff members split along party lines in discussing whether Congress should extend the current CFATS program for several more years or significantly expand the scope of the regulatory framework.

Diane Berry, a member of the House Homeland Security Committee’s Republican staff, said a seven-year reauthorization of CFATS would give DHS and industry enough time to fully implement the program and then give Congress an opportunity to evaluate its effectiveness.

“We’re still in a learning phase with CFATS,” Berry noted. She said there might not be enough time for Congress to complete action on a multiyear reauthorization this year. But CFATS “is among the top priorities for the committee,” she added.

Gerald S. Couri, senior environmental policy adviser to Republicans on the House Energy & Commerce Committee, said a seven-year renewal would give chemical manufacturers “confidence in their investments in security upgrades.” A lengthy extension, he added, would also give DHS time to improve the program and learn lessons about what changes are needed going forward.

But Jacqueline Cohen, Democratic counsel for the House Energy & Commerce Committee, said Rep. Henry A. Waxman (Calif.), the committee’s top Democrat, believes there are “significant security gaps that need to be addressed” and does not support a long-term extension of CFATS.

Waxman, Cohen said, thinks the program should be expanded to address security concerns at drinking water and wastewater treatment plants, which typically use and store large amounts of chlorine on-site. He also believes that reauthorization legislation ought to require the riskiest facilities to adopt so-called inherently safer technology (IST), she added, such as using safer processes or substituting less toxic chemicals where possible.

Chris Schepis, a Democratic staff member of the House Homeland Security Committee, agrees with Cohen that a seven-year extension of CFATS would be too long. “We’d like to see something shorter and have Congress focus on oversight” to ensure that DHS stays on track as it implements the program, he remarked.

DHS’s authority to continue its antiterrorism security efforts at chemical plants across the country would be extended through 2018 under legislation (H.R. 908) approved in May by the House Energy & Commerce Committee. Five Democrats joined all of the panel’s Republican members in voting 33-16 for the bill. The House Homeland Security Committee approved similar legislation (H.R. 901) in June by a 26-5 vote, with eight Democrats supporting the measure. The two panels share jurisdiction over chemical plant security.

It’s now up to House Republican leaders to decide which bill to bring to the floor for a vote by the full House. William E. Allmond IV, SOCMA’s vice president of government relations, said the industry doesn’t have a preference because both proposals would essentially continue the existing program for seven more years.

The broad support the bills received in committee “is an endorsement by Republicans and Democrats alike that the current chemical security standards are appropriately securing chemical facilities against attack,” Allmond said. Both measures would “provide certainty to our industry that DHS will keep these standards in place.”

Although either security bill would be expected to easily pass the Republican-dominated House, the outlook in the Senate is less certain. The Senate Homeland Security & Governmental Affairs Committee approved legislation on June 29 that would extend CFATS for three years through fiscal 2014. The bill (S. 473), sponsored by Sen. Susan M. Collins (R-Maine), was passed on a bipartisan 8-2 vote.

Sen. Joseph I. Lieberman (I-Conn.), committee chairman, voted for the bill, but said he believes the legislation should include an IST mandate for high-risk chemical facilities and also eliminate the current exemptions for drinking water and wastewater plants and for port facilities.

“I think the better part of wisdom here is to extend the program rather than put its existence in jeopardy,” he said before voting for the measure. Lieberman added that he will determine whether there is sufficient support to amend the bill when it is taken up on the Senate floor.

Although the chemical industry is pushing for a multiyear extension of the existing CFATS program, the House and Senate bills are being fought vigorously by a coalition of environmental activists and labor unions and their Democratic allies in Congress.

Greenpeace, which has been leading the opposition, has long argued that CFATS is “fatally flawed,” primarily because it prohibits DHS from requiring the highest risk facilities to use safer chemical processes.

Conversion to safer processes is the only security measure that can eliminate catastrophic risk, Rick Hind, Greenpeace’s legislative director said. “Unlike fence-line security, safer processes can prevent disasters by turning plants into nontargets, reducing their liability and regulatory obligations, and even saving money,” he remarked. “While hundreds of plants have switched to safer processes, most of the highest risk plants have not.”

The coalition is backing an alternative bill (S. 709) introduced by Sen. Frank R. Lautenberg (D-N.J.) that would require the approximately 4,600 chemical facilities classified by DHS as high risk to evaluate whether the consequences of a terrorist attack could be reduced by using a safer chemical or process. A plant would have to implement those safer measures—if feasible and cost-effective—if it had been classified as one of the highest risk facilities.

The Lautenberg legislation is based on a bill (H.R. 2868) passed in November 2009 by the then-Democratic-majority House. An analysis conducted last year by Washington, D.C.-based consulting firm Management Information Services concluded that H.R. 2868 would create 8,000 jobs and leverage nearly $2 billion in economic stimulus, while placing “thousands of employees and millions of U.S. residents in a vastly safer environment.”

But the chemical industry has argued that an IST mandate is impractical—there is no agreed-upon methodology to measure whether one process is inherently safer than another process—and could send manufacturing overseas, costing the U.S. jobs.

“If IST becomes mandatory, it is possible that public policy could force manufacturers to move their facilities offshore to places where regulations are more lax,” Sloan told C&EN. He notes that Bayer CropScience recently shifted its U.S. production of methyl isocyanate to China.

Although some Senate Democrats will likely try to block a vote on the Collins bill because it lacks an IST provision, Allmond is confident that at least 60 senators will support a three-year extension of the existing CFATS program.