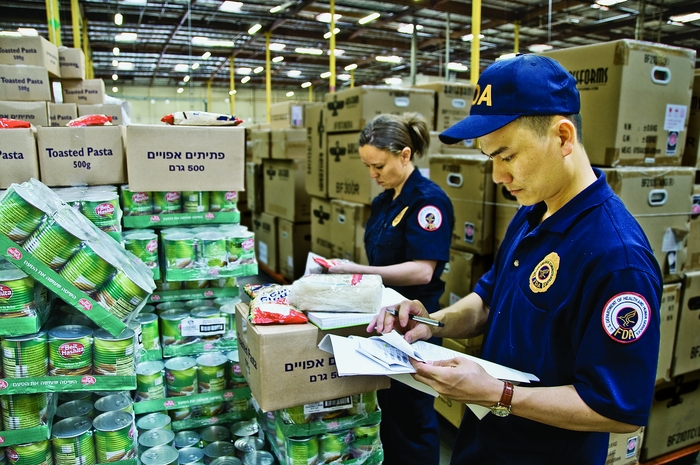 Credit: Food & Drug Administration
FDA has teamed up with Customs & Border Protection to stop unsafe food at the border.

Advocates for food safety reform are worried that Congress is not providing the Food & Drug Administration with the resources it needs to comply with deadlines set in the ambitious Food Safety Modernization Act. Passed late last year, the law gives FDA sweeping new authority to prevent food-borne illness.

To date, FDA has met several deadlines imposed by the food safety law. But the current budget environment in Washington, D.C., is threatening to negatively affect the agency’s resources. Such cuts, advocates warn, would make it impossible for FDA to fully implement key provisions of the law, including increased inspections of both U.S. and foreign food facilities.

FDA has already issued two rules, both of which took effect on July 3, under new authorities granted by the food safety law. The first rule allows FDA to detain food that it believes is unsafe for up to 30 days while the agency determines whether enforcement action is necessary. Previously, the agency had to rely on companies to voluntarily recall food products that were believed to be unsafe. The second rule requires importers to inform FDA if any country has refused entry of the same food product.

In addition to the new rules, FDA issued an antismuggling strategy, developed in coordination with the Department of Homeland Security, to identify and prevent smuggled foods from entering the U.S. As part of that strategy, which was issued last month, FDA will join forces with DHS’s Customs & Border Protection to review import data and better identify a food product’s country of origin. FDA and CBP will also conduct joint inspections to identify smuggled food products.

The agency has met these and other deadlines imposed by the food safety law, but resources to implement the law in the future will need to grow, observers say. In particular, FDA will not be able to meet its inspection mandates if the agency doesn’t have enough money to pay its inspectors.

FDA will need to increase its budget by $1.4 billion over five years to fully implement the food safety law, according to estimates by the nonpartisan Congressional Budget Office. But FDA is unlikely to see its current budget of $2.5 billion, excluding user fees, increased in the next fiscal year.

The House of Representatives passed the fiscal year 2012 agriculture appropriations bill (H.R. 2112) in mid-June, cutting FDA’s budget by $285 million, or 11.6%, compared with current spending levels. Of those cuts, $87 million is directed at food safety programs, a decrease of 8.3% compared with the current spending level of $1.0 billion. The bill passed by a 217-203 vote.

It is unclear whether the Senate, which has yet to take up any fiscal year 2012 appropriations bills, will go along with the cuts. Advocates for boosting FDA’s budget say they don’t have much insight into what the Senate will do with the appropriations. But there isn’t “great optimism that any agency or program will do well,” says Steven Grossman, deputy executive director of the Alliance for a Stronger FDA.

The alliance estimates that FDA would lose 500 to 1,000 employees as a result of the House-passed budget cuts for next year. At the same time, FDA’s workload would increase, the group stresses.

Even so, many House Republicans object to increasing FDA’s funding as well as to expanding its regulatory authority. “The food supply in America is very safe because the private sector self-polices, because they have the highest motivation. They don’t want to be sued; they don’t want to go broke,” Rep. Jack Kingston (R-Ga.), chairman of the agriculture appropriations subcommittee, emphasized on the House floor when FDA’s appropriations bill was being debated.

Several House Democrats, however, oppose the cuts to FDA’s budget, particularly with respect to food safety. “We need to invest in the FDA to protect the health of consumers and the safety of our food products,” says Rep. Rosa L. DeLauro (D-Conn.), a longtime advocate for food safety reform. “But these cuts will tie the FDA’s hands, restricting their oversight and effectiveness and asking them to do more with less.”

Rep. John D. Dingell (D-Mich.), one of the chief architects behind the food safety law, is outraged by the cuts. “The audacity and arrogance to play political games with the safety of our food sickens me,” Dingell wrote in a June 25 commentary in the Detroit Free Press. Dingell introduced an amendment to the appropriations bill that would have restored half of the $87 million cut from FDA’s food safety programs, but the amendment did not pass.

When the House passed its version of the food safety bill in 2009, it included an annual $500 registration fee for all food facilities to help pay for increased inspections and other FDA regulatory activities (C&EN, July 6, 2009, page 20). The industry-paid user fees, however, did not make it into the final food safety bill because the Senate didn’t support them. As a result, FDA must rely on congressional appropriations to pay for its food safety activities.

Had the final bill that was signed into law included user fees, the bill wouldn’t have cost the government any money or added to the deficit, Dingell stresses. “Unfortunately, now we are witnessing a perfect storm,” he says. “FDA has the responsibility and tools to prevent and detect food-borne illnesses without the money to back it up.”

Health advocacy groups are also disappointed with the House-passed cuts to FDA’s budget. “For too long the FDA, which is responsible for the safety of over 80% of the foods we eat, has not had adequate resources or power to protect Americans from dangers in the food supply,” says Erik Olson, director of food programs for the Pew Charitable Trusts’ Health Group.

Several other consumer groups are also pushing Congress for more resources at FDA, playing up the importance of the agency. “FDA is a preeminent public health agency that ensures that our food supply is safe and that drugs, vaccines, and medical devices are safe and effective,” says Christopher Waldrop, director of the Consumer Federation of America’s Food Policy Institute and a board member of the Alliance for a Stronger FDA. “There is no backup if the agency isn’t there.”

Other groups say FDA needs to refocus how it spends its resources. “We’ve seen numerous examples of the agency wasting taxpayer dollars in going after small, local producers,” points out Sally Fallon Morell, founder and president of the Weston A. Price Foundation, a nutrition activist group. “If the agency shifts its focus to the truly high-risk facilities, then it could do a much better job protecting American consumers, even with the reduced funding.”