Chemical deal-making has hit a soft patch, though observers say it is probably only temporary

Chemical Mergers
[+]Enlarge
Despite a slow second quarter, first-half 2011 is up over last year’s half.NOTE: Deals announced in each quarter with ­disclosed values of greater than $50 million.SOURCE: PricewaterhouseCoopersThe first half of 2011 is up somewhat from the same period in 2010. 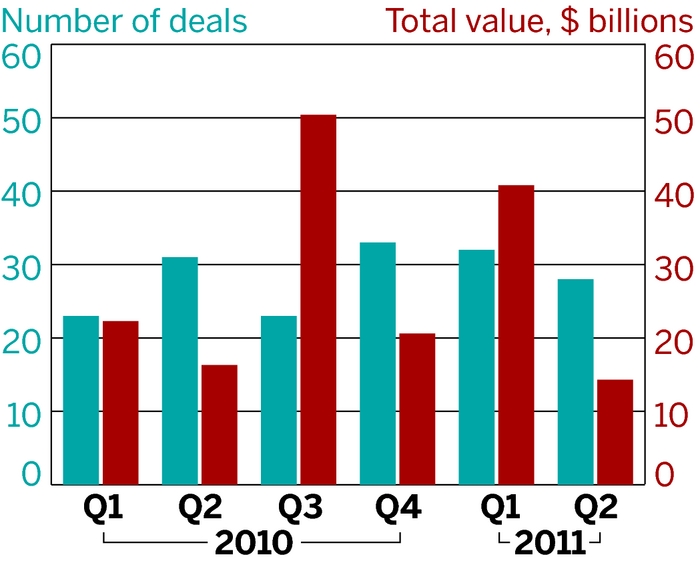 Despite a slow second quarter, first-half 2011 is up over last year’s half.NOTE: Deals announced in each quarter with ­disclosed values of greater than $50 million.SOURCE: PricewaterhouseCoopersThe first half of 2011 is up somewhat from the same period in 2010.

Chemical industry mergers and acquisitions (M&A) activity declined in the second quarter versus the first quarter, in terms of both value and the number of deals, according to a report from the consulting firm PricewaterhouseCoopers (PwC). However, the pace of transactions suggests that, overall, 2011 should see more deal-making than 2010 did.

The total number of deals decreased from 311 in the first quarter of 2011 to 262 in the second quarter. Over the same period, the number of deals with reported transaction value of more than $50 million fell from 32 to 28.

Tracey A. Stover, global chemicals leader at PwC, says the number of chemical deals typically remains constant through economic booms and busts. “What changes is the dollar value of the deals,” she says, noting that deal values climb as economic conditions improve.

When economic times are tough, Stover explains, chemical firms are primarily interested in selling businesses to raise some quick cash or to dispose of divisions that are losing money. “Now they are in a growth period,” she says. “They are saying, ‘What can I do in a big way to move my business forward to the next step?’ ” The answer is often a pricey transaction.

Chris Cerimele, head of the chemicals practice at the investment banking firm Houlihan Lokey, says M&A activity has moderated over the summer, though he hasn’t seen a significant pullback. “Some of it is due to uncertainty about what is going on in the economy,” he says. But he also notes that the interest among chemical firms to make acquisitions remains strong.

Indeed, such strategic investors have been driving M&A. Financial buyers such as private equity firms accounted for just 15% of the value of second quarter deals, according to PwC.

Stover says she continues to hear a lot of private equity company interest in making acquisitions, but it’s possible that they are being outbid by chemical firms. “It is more competition from the strategics that may be beating private equity to the punch,” she says.

Strategic buyers have a couple of key advantages over private equity firms when it comes to making acquisitions, Cerimele says. Chemical companies can afford to pay more because they can reap the benefits of synergies between their existing operations and the acquired businesses. In addition, he notes, many large corporations can avoid raising acquisition financing because of their strong balance sheets.

Cerimele says his outlook for the remainder of this year depends on whether the jitters over the economy clear up. But he does expect that the summer M&A doldrums shall soon pass. “We are going to see more activity beginning in the September and October time frame through the end of the year,” he says.