For women in science and technology, salaries, number of degrees remain lower than for men

In The Field
[+]Enlarge
Credit: Shutterstock
Engineering occupations are still rare for women, but salaries for those with jobs in this area are nearly equal to those of their male counterparts, according to a Commerce report. 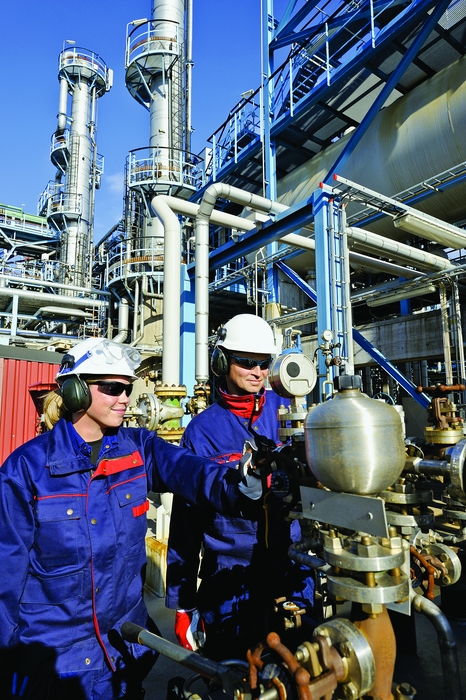 Credit: Shutterstock
Engineering occupations are still rare for women, but salaries for those with jobs in this area are nearly equal to those of their male counterparts, according to a Commerce report.

Those concerned about the status of women in the fields of science, technology, engineering, and mathematics (STEM) received more unwelcome data from the Department of Commerce this month. A report from the department’s Economics & Statistics Administration found women to be “vastly underrepresented in STEM jobs and among STEM degree holders, despite making up nearly half of the U.S. workforce and half of the college-educated workforce.”

The good news is that employment in STEM fields is much higher than in the U.S. job market as a whole, and that people working in these fields receive higher-than-average salaries. Women, however, lag behind men both in the number of STEM jobs and in the salaries they receive.

The 11-page report, “Women in STEM: A Gender Gap to Innovation,” examines the gender gap at several critical places. It looks at the number of degrees women earn in STEM fields, the jobs women and men have, and the salaries of men and women in and out of STEM fields. The study defines STEM jobs to include professional and technical support occupations in the fields of computer science and mathematics, engineering, and the physical and life sciences. It does not include the fields of business, health care, and social science. The data come from the 2009 American Community Survey, a sample survey sent by the Bureau of the Census to 3 million households every year to collect vital social, economic, and demographic information.

“We haven’t done as well as we could to encourage young people to go into STEM jobs—particularly women—which inhibits American innovation,” said Acting Secretary of Commerce Rebecca M. Blank, in a statement about the study. “Closing the gender gap in STEM degrees will boost the number of Americans in STEM jobs and that will enhance U.S. innovation and sharpen our global competitiveness.”

The primary finding of the study is that, although women make up 48% of the total U.S. workforce, they represent only 24% of STEM jobholders. “In other words, half as many women are working in STEM jobs as one might expect if gender representation in STEM professions mirrored the overall workforce,” the report states.

The numbers are similar for the subset of the workforce that holds college degrees. For this group, the Commerce data show that women account for 49% of those employed in the U.S. who are 25 years old or older, but only 26% of the employed STEM degree holders. Specifically, the report states that 6.7 million men, but only 2.5 million women, in the workplace hold STEM degrees. 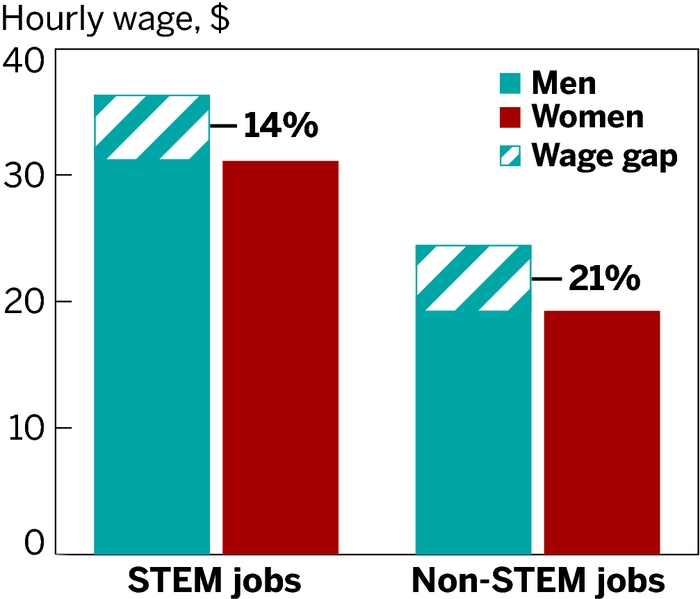 The major difference between the percentage of degrees earned in specific areas for women and men is in the fields of the physical and life sciences and engineering. This is a factor when looking at the STEM fields women are working in and the salaries they receive because biological science jobs are lower paying than jobs in engineering fields, observers point out.

This pattern has been consistent over the past decade, according to the Commerce report. From 2000 to 2009, the survey has shown that the number of college-educated women in the workforce has grown slightly from 46% to 49%, but the percentage of women in STEM jobs has been steady at 24%.

A close look at this latter category shows some changes in where women STEM graduates are employed. In 2009, the survey found that 40% of women in STEM jobs were in the physical and life sciences, an increase from 36% in 2000. Similarly, women with STEM management positions have also risen slightly from 23% a decade ago to 25% in 2009. For engineering, women went from 13% of the STEM workforce in 2000 to 14% by 2009.

Other analyses of women in science and technology have noted this change. Rolf F. Lehming, director of the Science & Engineering Indicators Program for the National Science Foundation, tells C&EN that the Commerce data mirror what NSF has found. The NSF program produces a massive compilation of education and workplace data that has been published since 1972 by the National Science Board, the governing body of NSF. It will publish its 20th biennial edition in January 2012. Lehming has been director of the program for the past 10 years.

It is his view that the 2000 data—women making up 30% of the computer science and math workforce—reflect an artificial high created by the push for computer scientists and engineers in the run up to Y2K, the year 2000 problem due to use of only two digits in computer programs to represent years. “The industry was looking for a lot of people with those skills,” Lehming says. “Y2K was a big deal, and many schools started computer science programs and lots of people, including women, went into the field. And the number of degrees in computer science went up very strongly.”

Lehming says that this demand continued to produce high numbers of computer scientists for the job market until about 2003, and then the numbers began to drop off sharply. “So by the time you get to 2009, the numbers for women are down to about 14% again, which is closer to what the norm was before,” he says.

The Commerce report affirms that the salaries of both men and women with STEM jobs tend to be higher than those of individuals with degrees in other areas. College-educated women were found to earn 20% more if they are in STEM jobs than if they work elsewhere. Men in the same category had an 11% premium.

Employment Gap
[+]Enlarge
Women with STEM degrees hold only about one-fourth of the jobs in science and technology occupations. NOTE: Employed persons age 25 and over. Shares for men and women do not add up to 100% due to rounding. STEM = science, technology, engineering, and mathematics. SOURCE: Economics & Statistics Administration calculations from 2009 American Community Survey data 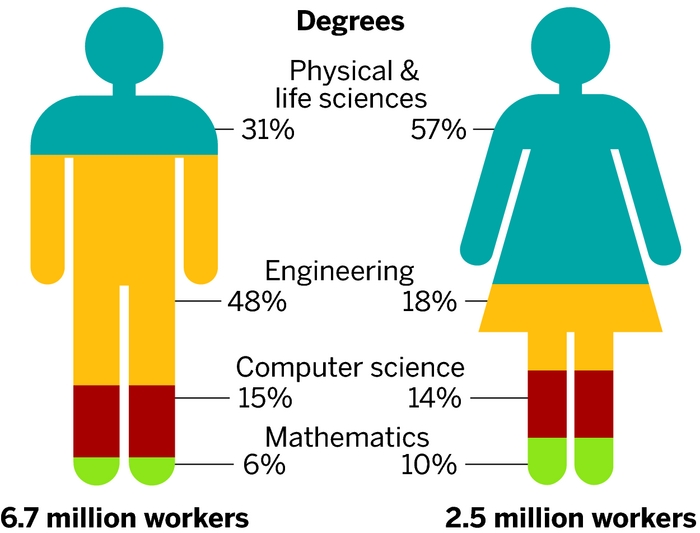 Women with STEM degrees hold only about one-fourth of the jobs in science and technology occupations. NOTE: Employed persons age 25 and over. Shares for men and women do not add up to 100% due to rounding. STEM = science, technology, engineering, and mathematics. SOURCE: Economics & Statistics Administration calculations from 2009 American Community Survey data

In STEM occupations, the report estimates that men earned an average of $36.34 per hour and women earned $31.11 per hour in 2009, for a gender salary gap of 14%. While still significant, this gap, the report notes, is far less than the 21% salary difference between men and women with jobs outside science and technology fields.

Report data also show a variation of salaries among men and women within STEM occupations. For example, men report earning about 12% more than women in the computer and math fields, and 8% more than women in the physical and life sciences category. The smallest pay differential was in the engineering field, with women reporting earning just 7% less than their male counterparts.

The Commerce survey echoes previous studies of women in science and technology, such as one in 2010 by the American Association of University Women. The AAUW report notes many of the same increases in jobs and degrees as the Commerce report, including the drop in women doing computer science.

“The two studies are very comparable,” says Christianne Corbett, a senior researcher at AAUW and one of the authors of the AAUW report. “The greatest difference is that we delved more into what the social science shows about why fewer girls want to study in these areas.” She emphasizes that, even though some of the percentages for women participating in STEM occupations appear quite low, there has been steady and significant progress in STEM jobs for women over a long time.

NSF’s Lehming says that the Commerce report is well-done and presents some important information. “We have been running similar analyses using our survey data, and the findings of the Commerce report come as no surprise to us,” Lehming says. “I guess the picture this report and others like it paint is about how difficult it is to offer the right mix of incentives for getting women into STEM fields,” he concludes.