[+]Enlarge
Credit: Adapted from Nature
The enzyme OGT binds UDP (magenta) and a peptide substrate. Enzyme residues essential to activity are highlighted in orange, and the glycosylation site on the peptide is marked with an asterisk. 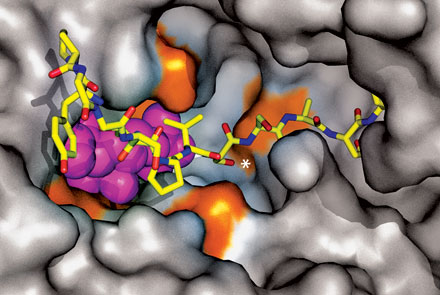 Credit: Adapted from Nature
The enzyme OGT binds UDP (magenta) and a peptide substrate. Enzyme residues essential to activity are highlighted in orange, and the glycosylation site on the peptide is marked with an asterisk.

Human O-linked β-N-acetylglucosamine transferase (O-GlcNAc transferase, or OGT) not only has a long name but also a long list of activities. By adding sugars to a wide variety of proteins, it regulates many cellular processes, and mistakes it makes have been associated with diabetic complications, cancer, and Alzheimer’s disease. But its molecular architecture has been elusive.

Harvard scientists now report having obtained OGT’s crystal structure (Nature, DOI: 10.1038/nature09638). The new structure could lead to the development of inhibitors as probes of the enzyme’s activity or as therapeutics.

OGT catalyzes the transfer of GlcNAc from uridine diphosphate (UDP) GlcNAc to serines and threonines of proteins in the cytoplasm, mitochondria, and nucleus.

“It’s an unusual posttranslational modification because it’s a dynamic glycosylation that occurs in the cytoplasm and the nucleus,” whereas glycosylation usually occurs in the Golgi or endoplasmic reticulum, says team leader Suzanne Walker, a Harvard biochemist. “OGT glycosylates many residues that can also be phosphorylated, and so it is proposed to modulate important kinase signaling pathways.”

Researchers have been trying to solve the structure of OGT for more than a decade. One structure reported part of the mammalian enzyme but not the catalytic site. Other researchers reported complete structures of homologous bacterial enzymes.

The new structure reveals key differences between the bacterial and human enzymes, Walker says. The human enzyme has an “intervening domain” that is not found in the bacterial enzyme. This domain, which has unusually basic polarity, probably interacts with negatively charged macromolecules such as membrane surfaces, nucleic acids, and other proteins, Walker says. It may be involved in cellular localization or substrate selection, but its functions have not yet been explored.

Walker and coworkers also solved a structure of OGT bound to a protein substrate. This structure shows that the enzyme binds the peptide backbone of the substrate and suggests that it recognizes regions of proteins that can adopt extended conformations.

In addition, the group’s structure and kinetic experiments suggest that UDP-GlcNAc and protein substrates must bind OGT in a specific order. The experiments “provide strong evidence for the sugar nucleotide binding first and causing conformational shifts prior to peptide binding,” says Nicola Pohl, a professor of chemistry and of chemical and biological engineering at Iowa State University. “This evidence has big implications for inhibitor design; an approach that just focused on common peptide substrate similarities would likely fail.”

“The crystal structure of the mammalian enzyme is a first step toward a molecular understanding of O-GlcNAcylation,” says Gerald W. Hart, the discoverer of OGT and a professor of biological chemistry at Johns Hopkins University. “This structure of OGT will help take the entire field to the next level by providing a molecular basis for the regulation of OGT and its activity on myriad key regulatory proteins in eukaryotic cells.”