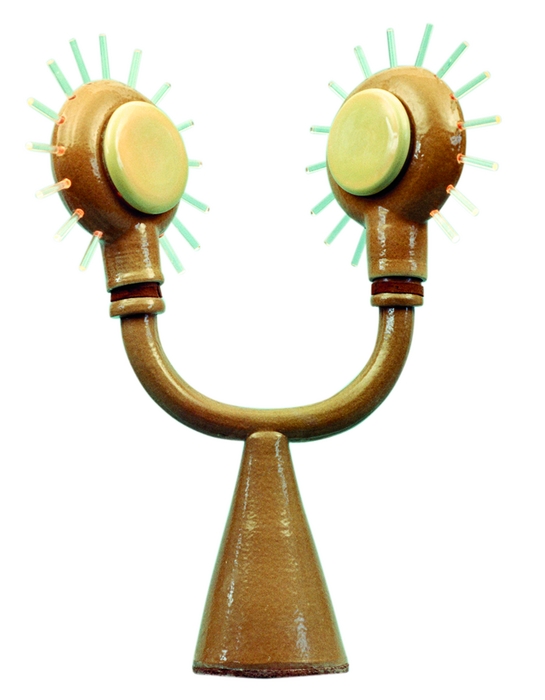 These days, when potters need orange or yellow shades for their pieces, they can turn to a variety of tin compounds. But in a less paranoid time, Roberta Treseder of Los Gatos, Calif., found that uranium glazes were just right for some of those warm hues.

[+]Enlarge
Credit: Mayo Clinic
All aglow: Control cat (lying down) is sad because all she got was X-ray vision. 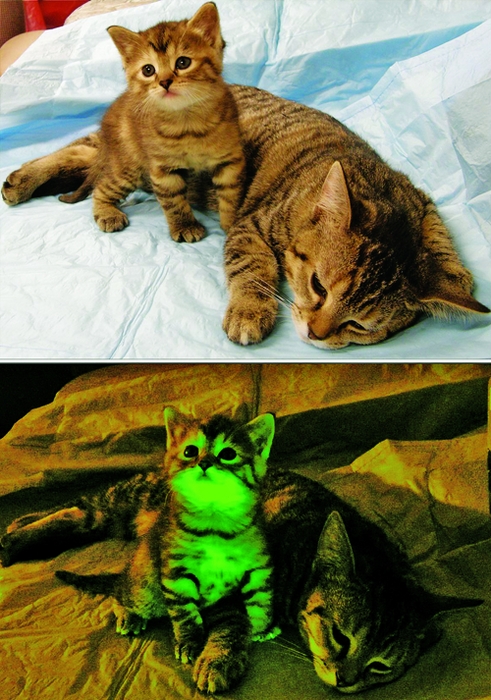 Credit: Mayo Clinic
All aglow: Control cat (lying down) is sad because all she got was X-ray vision.

Treseder studied glaze chemistry under Herbert Sanders at San José State University, earning a master’s degree in ceramics in 1969. During her studies, Treseder compounded glazes from raw materials. In addition, she developed techniques to throw exceedingly thin, delicate, and challenging pottery in porcelain, creating pieces—without a hint of irony—that appear to glow when fitted over lightbulbs.

She still practices pottery today, carefully controlling the conditions during the firing process by adding combustible materials such as paper to an electric kiln, or by restricting the airflow to a gas-powered kiln to create reducing atmospheres as needed. This allows Treseder access to the different oxidation states of the metals in her glazes—and the colors that come with them. When she worked with them back in the day, she fired her uranium glazes in an oxidizing environment at temperatures of around 1,260 °C.

As for the uranium, she tells Newscripts, “it’s kind of like Silicon Valley real estate, I suppose,” in that it wasn’t all that hard to get at the time. “There were several different grades available.” Making uranium glazes today would be tricky. It is legal to own and sell finished products made with them, provided that the glaze is no more than 20% uranium. To chemically alter it or “manufacture” with it, however, would complicate the situation.

But if any Newscripts readers own a Treseder original, there’s no cause for concern. A radiation detector might register a reading from the piece, but it would be “very low levels of radiation that would not penetrate skin,” says David McIntyre of the U.S. Nuclear Regulatory Commission.

Although Treseder never analyzed the chemical compositions of her finished pottery, she did keep detailed notes about her starting materials. Based on these, Arjun Makhijani of the Institute for Energy & Environmental Research says that UO3 was probably her orange, and that hard-to-replicate yellow was likely Na2U2O7, a close relative of the “yellowcake uranium” of spy-novel notoriety.

Although Treseder’s lamps derive their glow from the old-fashioned incandescence of lightbulbs, a group of glowing kittens get their shine from a fluorescent tag cribbed from jellyfish DNA. Eric M. Poeschla of the Mayo Clinic and coworkers have developed a technique they call gamete-targeted lentiviral transgenesis, in which an engineered virus inserts exogenous DNA into cat eggs prior to in vitro fertilization (Nat. Meth., DOI: 10.1038/nmeth.1703).

“The world has two AIDS pandemics, one in domestic cats and the other in humans,” the researchers write. The new method allowed the team to create kittens that express enhanced green fluorescent protein (eGFP) and TRIMCyp, a restriction factor that prevents the reproduction of feline immunodeficiency virus (FIV) in rhesus monkeys. The eGFP serves as an indicator of successful transgenesis and demonstrates that the method can transfer multiple genes.

Glowing carnivores have been achieved before (C&EN, May 11, 2009, page 40), but the Mayo Clinic researchers produced a “uniformly transgenic” litter of kittens, they say. The proteins of interest were expressed throughout the cats’ bodies, and subsequent generations inherited all of the desired traits.

As satisfying and photogenic as the eGFP results are, white blood cells from the trans­genic cats resisted FIV replication, which suggests these cats might be immune to the disease. So they and their creators deserve every 485-nm-illuminated snuggle because the critters could embody a huge advance in AIDS prevention for cats and humans alike.

Genomics
One gene could explain why some male birds are more colorful than females
Art & Artifacts
Chemical studies reveal what’s making The Scream lose some of its vibrant color and how to prevent further degradation
Synthetic Biology
Synthetic biology cracks blue rose case
Share X
To send an e-mail to multiple recipients, separate e-mail addresses with a comma, semicolon, or both.
Title: Uranium-Glazed Pottery, Fluorescent Cats
Author: Craig Bettenhausen
Chemical & Engineering News will not share your email address with any other person or company.

Comments
Craig Bettenhausen (July 27, 2012 11:08 AM)
An interesting series of interviews with Roberta Treseder, where she demonstrates and discusses some of her techniques, including a way to make clay whistles in your fireplace!

How to Make A Clay Animal Whistle
http://www.youtube.com/watch?v=QpL9M76UxTs&feature=relmfu