With chemistry labs on board, its Curiosity rover will identify organics, minerals, isotopes

LAB ON A PLANET
[+]Enlarge
Credit: NASA/JPL/C&EN
In this artistic rendition, the rover Curiosity takes a look at Mars. 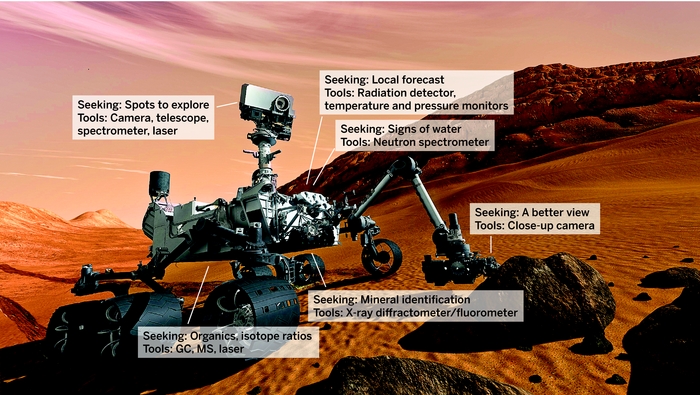 Credit: NASA/JPL/C&EN
In this artistic rendition, the rover Curiosity takes a look at Mars.

The National Aeronautics & Space Administration is about to make its biggest, most elaborate bid to determine whether Mars has, or ever had, the capability to support life. Eight years in the making and costing $2.5 billion, the Mars Science Laboratory mission features a 1-ton rover named Curiosity, packed with two fully equipped analytical chemistry laboratories.

The rocket that will carry the craft to Mars is set to launch on Friday, Nov. 25, from Florida’s Cape Canaveral. If all goes as planned, the Mars Science Laboratory will arrive at Mars in August 2012 and begin a two-Earth-year (one martian year) mission.

Although small, quick, and relatively inexpensive robotic missions such as the Mars Phoenix Lander and Deep Impact have been NASA’s mainstays during the past two decades, the Mars Science Laboratory harks back to the days of so-called flagship missions, featuring behemoth spacecraft. These missions held the possibility of great scientific discovery, as in the cases of the Cassini mission to Saturn and the Galileo mission to Jupiter, but also of great loss, as in the case of the Mars Observer, which blew up in 1992 before entering Mars’s orbit.

Curiosity was designed to be big—the size of a small car—so that scientists could pack its belly with laser spectrometers, gas chromatographs, and ovens, not to mention reservoirs of helium and other chemical supplies for the two analytical labs: Sample Analysis at Mars and CheMin. As a result, Curiosity will “be able to do lab-quality analyses that just weren’t possible with a smaller rover,” says David Blake of NASA Ames Research Center in Moffett Field, Calif., who is the principal investigator for CheMin, a suite of instruments on Curiosity that will analyze the chemistry of soil minerals.

The instruments will be able to peg the identity of clay minerals and organic compounds in soil samples, as well as study isotopic ratios of elements in the samples. Scientists hope to glean information about Mars’s habitability and identify compounds that could be associated with life.

Curiosity bears cameras to monitor the environment, a neutron detector to look for hydrogen (and thus, water), a robotic arm to drill samples, and a mast with a laser and spectrometers to search for spots to dig. A plutonium-based radio­isotope thermonuclear generator powers the rover.

NASA began work on the Mars Science Laboratory in 2003, although some of the instruments had been in development much longer. The mission faced hurdles: In 2008, the project was reportedly $600 million over its original $1.6 billion budget because of cost underestimation; costs eventually reached $2.5 billion. NASA had also planned to launch the Mars Science Laboratory in 2009, but technical problems caused a delay until the next launch window, in 2011. The mission is now slated for an on-time departure.

On Mars, Curiosity will descend to the planet’s Gale crater, which mission scientists chose because of an intriguing layered mountain in the crater’s center.

With its well-known watery history, and relative proximity to Earth, Mars has long been considered one of the most promising extraterrestrial locations to search for life. The first attempts began in 1976, with NASA’s Viking missions. Using gas chromatographs and mass spectrometers, two landers searched for organics in soil. They came up empty-handed.

Since then, space agencies around the world have sent a steady stream of orbiters and landers to Mars, not only to search for possible life but also to gather information for future human missions.

In 2004, two NASA rovers named Opportunity and Spirit, comprising the Mars Exploration Rover mission, landed on Mars and became one of the agency’s great successes. The two rovers far outlasted the 90 planned mission days: Spirit stopped operating only last year, and Opportunity is still moving across Mars’s surface. Together, the rovers looked for minerals that might help determine the history of water on Mars. But those rovers’ Mössbauer spectrometers are primarily useful for detecting iron, which limits the types of minerals they can identify.

The Mars Science Laboratory represents an exponential leap in extraterrestrial science capabilities for a couple of reasons. Curiosity is not only five times larger than Opportunity and Spirit but makes use of miniaturization technologies that, for example, have brought an X-ray diffractometer down from the size of a refrigerator to the size of a bread box, Blake says. “It took us a long time to build X-ray tubes the size of C cell batteries,” he says.

Curiosity will not look directly for life itself, but for chemical markers, such as methane, that might indicate microbes had been, or are, there.

“We now know water was quite extensive on Mars, but we really want to understand the habitability,” says Roger C. Wiens of Los Alamos National Laboratory who is principal investigator for the Chemistry & Camera (ChemCam) instrument package on Curiosity.

ChemCam’s job on Mars will be to look for potentially habitable spots to explore. ChemCam contains a laser, mounted on a mast that rises above Curiosity. The laser can vaporize a layer of material up to 25 feet away. An optical spectrometer will determine the material’s chemical composition using a technique called laser-induced breakdown spectroscopy.

If things look interesting, Curiosity’s arm will swoop in to drill a sample, carry it to the body of the rover, and deposit it into a chamber, where it will be sifted, processed, and apportioned to two analytical instruments.

The mass and laser spectrometers and gas chromatograph of the Sample Analysis at Mars lab will be able to identify a wide range of molecules, from simple methane to organics containing up to 20 carbon atoms, says Paul R. Mahaffy of NASA’s Goddard Space Flight Center in Greenbelt, Md., who is the lab’s principal investigator. Meanwhile the CheMin lab will characterize the minerals in the sample by X-ray diffraction.

The reams of raw data from the Curiosity labs will be posted publicly, allowing scientists around the world to search for evidence of Mars habitability.

Blake, who has been working on CheMin since 1989, says he’ll be happy just to see his project in operation. “If we land and get a sample, and CheMin works, and gets a real answer, I’ll just be home free.”