Government: Proposal includes targeted increases for R&D, but comes as Congress is still wrestling with this year's funding 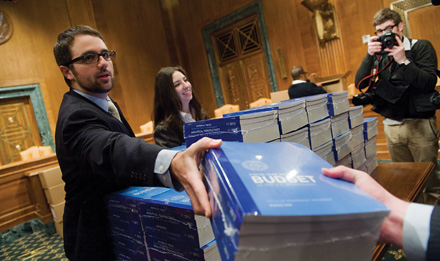 With Republicans in Congress calling for deep cuts in an unfinished 2011 budget, the Obama Administration rolled out its fiscal 2012 budget request that makes good on the President's promise to support science. But the bind for the President is balancing increased spending for some science programs in an overall flat budget environment for R&D. 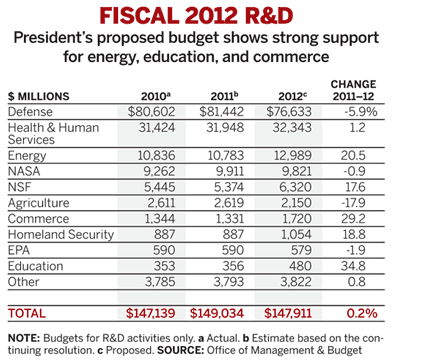 The 2012 request keeps R&D funding essentially flat at $148 billion, but increases nondefense R&D by 6.5% to $66.8 billion, with science education and technological innovation singled out for growth.

"These investments are an essential part of the budget my Administration is sending to Congress," President Obama said in a speech in Baltimore this week. "Because I'm convinced that if we out-build and out-innovate and out-educate, as well as out-hustle the rest of the world, the jobs and industries of our time will take root here in the U.S."

The complication stems from the fact that Congress has yet to set the current fiscal year's budget, which started on Oct. 1, 2010. As a result, budget growth for fiscal 2012 is marked against Congress' continuing budget resolution that funds the government until a final 2011 budget is passed. This stopgap measure sets funding for agencies at 2010 levels.

"This is a budget that our nation can be proud of," said John P. Holdren, the President's science and technology adviser and director of the White House Office of Science & Technology Policy. "It provides solid research and development investments to achieve game-changing advances in areas of crucial importance to America's future, including sustainable energy, information technology, advanced manufacturing, and science, technology, engineering, and mathematics education. At the same time, it reflects the President's strong commitment to fiscal discipline by cutting programs that were not competitive with our highest priority needs."

Education is another winner in the President's request. To support Obama's State of the Union pledge to prepare 100,000 science, technology, engineering, and math teachers over the next decade, the 2012 request provides $100 million for teacher-training programs at NSF and the Department of Education. It also tags $90 million to create an Advanced Research Projects Agency-Education to drive transformational improvement in education technology.

Another targeted priority in the request is clean energy development. The budget would support R&D of clean energy sources by setting $550 million for the Energy Department's Advanced Research Projects Agency-Energy.

To support continued biomedical advances, the National Institutes of Health's budget would grow by 2.4% to $31.8 billion under the 2012 request.

The science community welcomes the President's budget. "The President recognizes that our future depends on research," said William T. Tilman, president of the Federation of American Societies for Experimental Biology.