Energy: Support Up For Renewable Energy

Energy: Support Up For Renewable Energy

At a quick glance, priorities reflected in the Department of Energy’s 2012 proposed budget appear remarkably similar to its 2011 request. Its overall budget proposal for 2012 includes $29.5 billion in funding, $1.1 billion more than last year’s proposal and $3.1 billion above DOE’s 2010 appropriation. 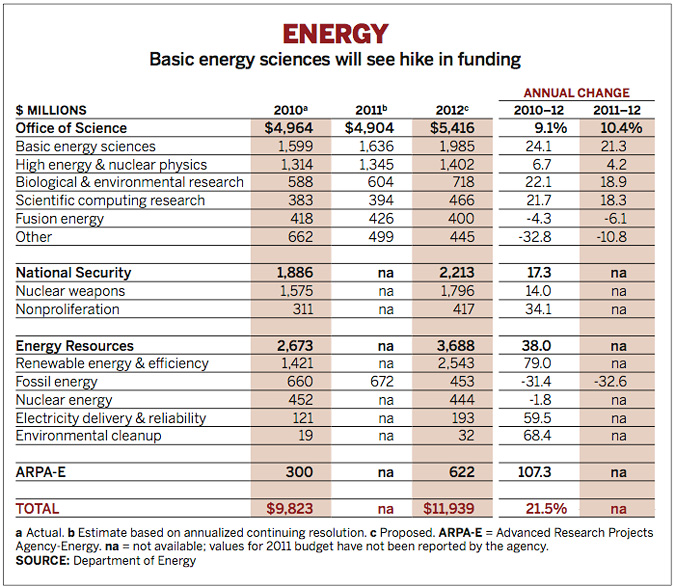 Complicating comparisons to other years is the fact that DOE did not provide data for all of its 2011 programs. That aside, the most significant change for the department may not be in the formal budget but in the loss of some $35 billion in American Recovery & Reinvestment Act of 2009 program funding that over the past two years has augmented department activities.

Like last year’s request, the 2012 proposal is good for science and like last year, the budget is closely tied to President Obama’s economic and energy development goals for the future. When explaining the budget, Energy Secretary Steven Chu echoed the President’s State of the Union address, describing a worldwide race to develop new clean energy technologies with the hope that the U.S. will dominate the emerging energy marketplace.

DOE’s science programs would receive a record $11.9 billion, nearly $2 billion, or 21.5%, more than they received in 2010. However, the 2010 appropriation does not include large science allocations from the recovery act. And although there were many gains, there were significant cuts for longtime energy players, particularly fossil fuels and hydrogen.

Looking at the big programs, nuclear weapons activities are slated to get $11.8 billion; energy programs, $4.8 billion; and environmental cleanup, $6.3 billion.

In addition, the Science Office fares well with an increase of 9.1% over 2010, for a total of $5.4 billion in 2012. This amount keeps the office on a doubling track for the period 2006–17 and includes significant gains for chemistry-related research, in part because of Chu’s continued support for the energy “research hubs.”

These hubs, which are Chu’s brainchild, are integrated research centers that bring together a diverse group of scientists to solve a particular energy research problem. Three hubs are being put together now, and in last year’s budget, Chu proposed a fourth, which was not funded. With this budget, the secretary aims for three more, providing about $146 million for a six-hub effort. The new hubs would be in the areas of “smart” electric grid technologies, batteries and energy storage, and materials science.

These areas, Chu said, have great potential but need support in terms of research and market deployment. He gave the example of the SunShot Initiative, which has the goal of drastically cutting the cost of solar photovoltaic panels to $1.00 per watt in a decade, more than 80% below today’s costs. The aid would fund a combination of applied and basic research, addressing manufacturing and installation technologies as much as fundamental research. The goal, he said, is to make the amount of effort needed to install photovoltaic panels similar to that required to swap out a water heater.

Development of small, modular nuclear reactors was also stressed by the secretary. The reactors’ output would be about one-third of today’s 1,000-MW-plus behemoths. “Stamped out” in a factory, he said, these reactors could serve a worldwide market that is just now searching for new electricity sources. The budget would provide $67 million to help design, certify, and license modular systems. With this approach, Chu said, the “U.S. could recapture leadership” in nuclear energy.

Chu’s first foray into Congress took place on Feb. 16, when he went before the Senate Energy & Natural Resources Committee. There, he faced criticism that by choosing to increase R&D funding for solar, wind, biomass, and geothermal and choosing to decrease spending for fossil-fuel R&D, he was picking winners and losers.

Chu responded that oil, natural gas, and coal are mature technologies that provide most of our energy today. They are technologies we will continue to need into the future, he said. Renewables have great potential in the U.S. and internationally, he added, but need government support to grow.