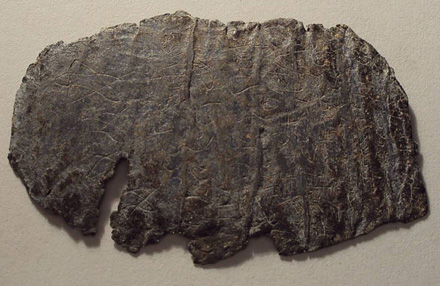 Credit: Fine Arts Museum, Castellón, Spain
This inscribed lead plate dates to the 9th and 10th century and was used to calibrate the new voltammetry method.

In a standard voltammetry analysis, scientists apply a range of positive and negative voltages to a sample that weighs just nanograms. They then measure the current that flows through the sample from the resulting reduction and oxidation reactions occurring in the metal.

To apply voltammetry to date lead artifacts, researchers led by Antonio Doménech-Carbó, an analytical chemist at the University of Valencia, in Spain, counted electrons generated by two components of corroded lead called lead oxide and lead dioxide. As lead ages, the amount of these two species increases. To date the sample, the researchers used a mathematical relationship between generated current, applied voltage, and time of corrosion.

Doménech-Carbó and his team calibrated the method with a series of well-documented lead artifacts, such as lead plates, ranging in date from the 5th century B.C. to the present. He says that the new voltammetry technique can pinpoint a lead piece's age to within 150 years.