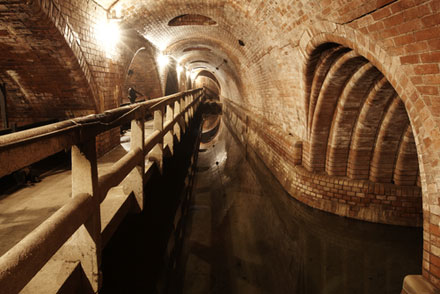 Credit: Shutterstock
Researchers want to sample a city’s wastewater to monitor its people’s drug use.

While high school graduates in Oslo, Norway, partied hard for two weeks last spring during the so-called Russ graduation festivities, levels of the drug ecstasy spiked about 10-fold in the city’s sewer system, according to new research. In the past few years, water quality specialists have monitored such illicit drug use through sewage sampling there and in other cities, including London and San Diego, to observe the effects of drug control policies.

However, current analytical methods require expensive equipment to collect water samples and don’t allow for continuous sampling of wastewater. Now researchers demonstrate that so-called passive filters provide an efficient and inexpensive means to measure drug use over weeks in municipal wastewater. With the samplers, they studied the ebbs and flows of 11 drugs in Osloâ€™s sewers for a year, including during the Russ celebrations (Environ. Sci. Technol., DOI: 10.1021/es201124j).

Kevin Thomas of the Norwegian Institute for Water Research, a non-profit research foundation, and his colleagues had previously used the passive samplers to monitor the water around oil platforms for byproducts of oil extraction. They thought that the tools might also work in wastewater to detect drugs or metabolites formed after drugs pass through the human digestive system. Unlike automatic samplers, which store small water samples for later laboratory analysis, passive samplers are cheap, small, and don’t require electricity, making them handy for long-term studies at sites with little space.

Passive samplers, also called organic chemical integrative samplers, detect chemicals in the environment by absorbing small quantities with a polymer membrane over a period of weeks. Researchers then replace the samplers with fresh ones, and bring the used samplers back to the laboratory. There, scientists wash the samplers with a solvent and measure the extracted chemicals with liquid-chromatography/mass spectrometry.

The researchers collected data at an Oslo sewage treatment plant on six drugs, including cocaine, ecstasy, and the antihistamine cetirizine, which is marketed in the U.S. as Zyrtec, along with the metabolites of five drugs. They could identify expected patterns, such as a correlation between outdoor pollen levels and cetirizine concentrations.

But not every spike in drug concentrations represents a change in usage, Thomas acknowledges. Sudden fluctuations in water flow, such as during snow melts in the spring, can throw off the samplersâ€™ calibration, he says. The team hopes to develop samplers that are less sensitive to abrupt changes in water flow.

Sara Castiglioni of the Mario Negri Institute for Pharmacological Research in Italy thinks that controlling for such variables could be tricky and might require calibrating the samplers for specific sites. But she says it might be worth the trouble, given the benefits of passive samplers over automatic ones.

Sewer sampling, in general, also improves on current methods to survey drug use, Thomas says. Public health researchers rely on in-person interviews, which usually underestimate actual drug use. “The nice thing about the sewer approach is it’s totally anonymous,” he says. Instead of pointing a finger at an individual, he adds, the method points it at an entire city.

Water
To monitor the health of cities’ residents, look no further than their sewers
Environment
Diverse sources release pharmaceutical compounds to water
Environment
Septic System Forensics
Share X
To send an e-mail to multiple recipients, separate e-mail addresses with a comma, semicolon, or both.
Title: Sewer Sampling Reveals Patterns Of Drug Use
Author: Lucas Laursen
Chemical & Engineering News will not share your email address with any other person or company.