The National Institutes of Health and Oregon-based instrumentation company FEI have teamed up to create a novel structural biology facility on the NIH campus in Bethesda, Md. Called the Living Lab Structural Biology Center, the center brings together experts from FEI and multiple NIH institutes, including the National Cancer Institute (NCI) and the National Institute of Diabetes & Digestive & Kidney Diseases, to accelerate structure determination of molecular complexes and proteins that are important in human diseases.

This public-private partnership is unique in terms of the complexity of the project and the speed at which the agreement was completed. The concept for the Living Lab started with FEI, which went looking for a partner. NIH was interested, and after only a few months of discussions the partnership got off the ground earlier this year. For its part, FEI provided the lab with a fully automated Titan Krios transmission electron microscope, optimized for cryogenic electron microscopy.

The instrument is a workhorse for high-resolution imaging. The basic microscope is used around the world for all kinds of research, but the cryogenic capability is well suited to “soft and squishy” medical samples, says Sriram Subramaniam, a senior scientist at NCI and codirector of the Living Lab.

Cryoelectron microscopy is gaining popularity in structural biology because it allows samples to be imaged in their native environment. FEI hopes the partnership will open new markets for the technique, making it as commonplace in structural biology as more traditional complementary techniques such as nuclear magnetic resonance spectrometry and X-ray diffraction.

NIH researchers are optimistic that the five-year collaboration will lead to new vaccines and medical treatments. To make that happen, Subramaniam is hoping the work will result in key technical improvements that will allow him to obtain structures of dynamic protein complexes or enveloped viruses in their native state.

NIH investigators have a long history of knowing what structures are medically important to study, Subraman­iam says. Instead of trying to answer questions using existing technologies, “we try to identify what the important questions are and develop technologies to actually go after them,” he explains. “By having FEI engaged with us, they have a better understanding of what it is we are trying to do,” he says. 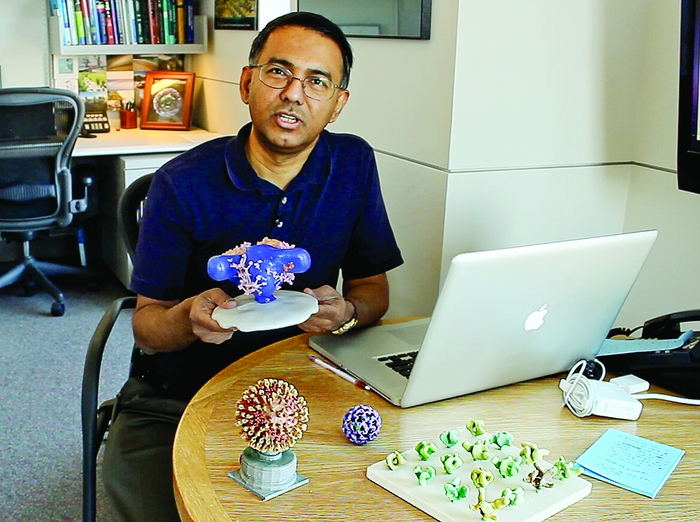 Subramaniam is particularly interested in the structures of the proteins that HIV uses to get into cells in order to design better vaccines. “We want to get structures of proteins without having to crystallize them first,” he says. This is important, he explains, because “crystallizing a protein changes its native form.”

The Living Lab was formed quickly because “there had been a lot of groundwork laid by the investigators before they approached the more formal process of getting an agreement in place,” says Kathleen Higinbotham, a specialist at NCI’s Technology Transfer Center, in Frederick, Md.

Before the company reached an agreement with NIH, “FEI did a thorough analysis of who we wanted to partner with in the Living Lab,” says Annette Kolodzie, strategic programs director at FEI and codirector of the Living Lab. One reason FEI chose NIH is the agency’s speed in achieving scientific results, Kolodzie says. In many cases, NIH scientists have much more flexibility in how they choose and pursue scientific projects than do university researchers, she tells C&EN.

Another important deciding factor was NIH’s expertise in determining what is medically important, Kolodzie says. “Having access to someone who can immediately tell us what is biologically relevant and will bring successes for the Living Lab quickly” is critical for the firm, she says.

Some people don’t realize that it can be easy to work with the government, Subramaniam says. NIH’s mission—to improve the health of the country—is clearly defined, he notes. “We are not in this to make a profit,” Subramaniam stresses. “The company is here to make a profit. The lines are clear.”

The broad nature of the Living Lab presented the biggest challenges in getting agreement, Higinbotham says. NIH typically sees collaborations that involve a particular compound or technology, she notes. “In this case, the collaboration actually advances an entire field,” she says.

Part of the difficulty was getting multiple projects from multiple investigators at multiple NIH institutes wrapped into one agreement, Higinbotham adds. But in the end, NIH was able to make the Living Lab project fit into a standard Cooperative Research & Development Agreement.

The most important factor that made the collaboration come together is “the passion to get the science to go forward,” Higinbotham tells C&EN. “That passion was ignited by the investigators,” she says, and it was transferred to all the other people who worked on getting this project established.