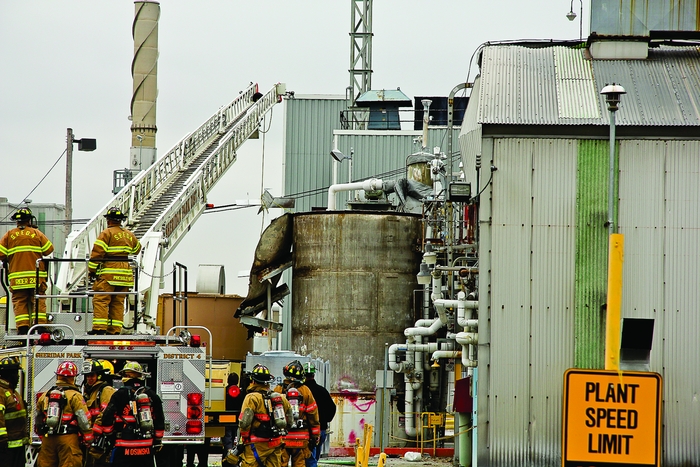 Because of a series of fatal chemical plant accidents involving welding, cutting, grinding, and other spark-producing “hot work,” the Chemical Safety & Hazard Investigation Board is reexamining this type of plant activity, said CSB Chairman Rafael Moure-Eraso.

The announcement by Moure-Eraso came at a press conference in Buffalo on April 19, just hours before a public meeting where the board released the results of its investigation of a hot work accident at the nearby DuPont Yerkes facility. The DuPont accident occurred on Nov. 9, 2010, killing one welder and burning his supervisor during a routine maintenance project. Both were contract workers.

Moure-Eraso said the DuPont accident is nearly identical to 11 hot work accidents the board has investigated over the years. The investigations are discussed in a “safety bulletin” issued in March 2010, which was intended to encourage industry to closely examine its safety requirements for this type of work. A total of 22 workers were killed in these accidents.

“I find it tragic that we continue to see lives lost from hot work accidents, which occur all too frequently despite long-known procedures to prevent them,” Moure-Eraso said. The DuPont accident involved flammable vapors that exploded during routine maintenance, and Moure-Eraso pointedly said facility managers have “an obligation” to ensure the absence of a flammable atmosphere in areas where hot work is to take place.

At DuPont, a welder was working on top of a storage tank that, unbeknownst to him, was leaking flammable vinyl fluoride. Sparks from welding likely ignited the vapor and the tank’s contents, which resulted in most of the tank’s top being blown off. The welder died instantly from blunt force trauma; the foreman who was watching nearby received first-degree burns and minor injuries.

The facility produces polymers and surface materials for countertops, sold under the trade names Tedlar and Corian, CSB team leader Johnnie Banks explained. The part of the manufacturing process involved in the accident transfers polyvinyl fluoride slurry from a reactor through a flash tank, which separates residual vinyl fluoride and steam from the polyvinyl fluoride slurry. The slurry is then piped to storage tanks, which are interconnected by an overflow line. DuPont had erroneously determined that any vinyl fluoride vapor that might enter the overflow tanks would remain below flammable limits, according to CSB.

The tank that exploded, Tank 1, was one of three connected by various flow lines, according to CSB documents. Maintenance work was completed on the two other tanks, but for Tank 1, work had been stalled because replacement parts were missing. Plant operations were restarted using the two repaired tanks. Although Tank 1 was blocked from the main process, an overflow line still connected it to the other two tanks. The overflow line allowed vinyl fluoride to flow into Tank 1 and accumulate to explosive concentrations, according to the CSB investigation. When welding resumed, the tank exploded.

Banks said that although DuPont personnel monitored the atmosphere above the tank prior to authorizing hot work, no monitoring was done inside the tank to see whether any flammable vapor existed there.

The board report specifically recommends that DuPont include better enforcement of safety procedures for hot work and ensure explosion hazards associated with hot work are recognized and mitigated. It also urges revising corporate procedures to require all process piping and vent piping to be isolated before any hot work is authorized and to require air monitoring for flammable vapor inside tanks and other containers where hot work is to be performed.

Moure-Eraso added that the accident raised board concerns about DuPont, long considered an exemplar of a safety-conscious company. The Buffalo accident occurred 10 months after a series of three accidents that took place within 33 hours at DuPont’s Belle, W.Va., facility, including one that killed a worker who was exposed to phosgene (C&EN, Oct. 10, 2011, page 34).

Along with the DuPont hot work investigation report, the board released a new hot work safety video, Moure-Eraso noted.

The results of CSB’s reexamination of hot work safety, he said, would be released soon and will include recommendations to the Occupational Safety & Health Administration as well as industry. The board will incorporate a broader look at similar accidents using a wider range of databases than it has in the past.