[+]Enlarge
Credit: William Schulz/C&EN
From left, Keim; Thomas V. Inglesby, CEO and director of the Center for Biosecurity at the University of Pittsburgh; and Fauci chat before a Senate hearing on biosecurity. 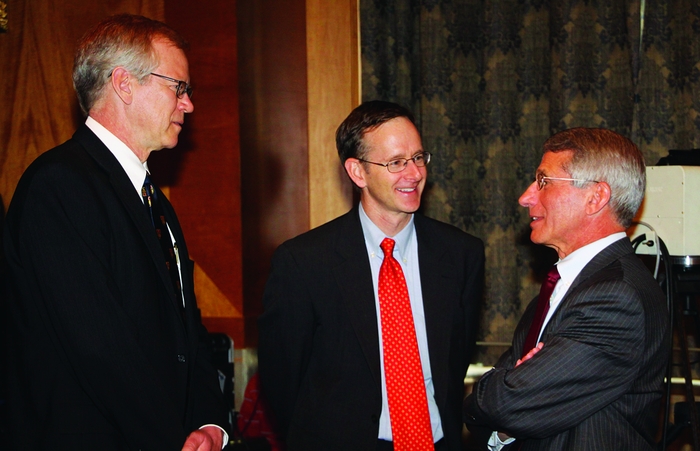 Credit: William Schulz/C&EN
From left, Keim; Thomas V. Inglesby, CEO and director of the Center for Biosecurity at the University of Pittsburgh; and Fauci chat before a Senate hearing on biosecurity.

Last week saw more questions and, maybe, a few answers about the drawn-out controversy over recent H5N1 avian flu research. After exchanges of letters and a congressional hearing, cooler heads seemed to prevail with signs of a consensus among stakeholders.

Those events include the mysterious appearance at the end of March of a new policy document on dual-use research of concern on an NIH website without the imprimatur of any specific federal agency (C&EN, April 9, page 7). White House Office of Science & Technology Policy Director John P. Holdren—who also received a letter on the H5N1 situation from Sensenbrenner—has said that the policy is the work of an interagency panel.

The stage was set for these events earlier this year when a federal advisory board, the National Science Advisory Board for Biosecurity (NSABB), first advocated for heavily redacted publication of the H5N1 research but later said publication could proceed in the form of revised papers. A member of that board, Michael T. Osterholm, wrote to an NIH administrator with a long list of complaints, including a charge that the board’s new recommendations were the result of a stacked witness panel at a March NSABB meeting. That letter was leaked to the public last week.

Witnesses at the meeting “have a real conflict of interest in that their laboratories are involved in this same type of work and the results of our deliberations directly affect them, too,” Osterholm fumed.

Sensenbrenner, who is likely to hold House hearings on the dual-use/H5N1 issue, is seeking answers from Collins about NSABB’s changing advice on publication of the H5N1 research, as well as the origins of the new dual-use research-of-concern policy.

On the Senate side, the Homeland Security & Governmental Affairs Committee held a hearing on April 26, which struck something of a more collegial tone.

Among the witnesses, NSABB Acting Chair Paul S. Keim of the University of Northern Arizona downplayed Osterholm’s concerns, saying, for example, that board members were capable of critically analyzing witness testimony.

Anthony S. Fauci, director of NIH’s National Institute of Allergy & Infectious Diseases, testified to the Senate panel about the value of basic research—despite risks—on microorganisms like H5N1. The government’s new policy on dual-use research of concern, he said, will allow this work to move forward but also provide means to evaluate and deal with biosecurity concerns. The policy will evolve and improve over time, he said.

“Nature itself is the most dangerous bioterrorist,” Fauci said, referring to possible mutations in wild-type H5N1 virus that might confer human transmission and trigger a pandemic. He noted that NIH is in the business of funding long-term research that might reveal strategies to fight an emerging disease agent.

“This is not a theoretical danger, this is a real danger,” Fauci said of the avian flu threat.