Sales and profits climb once again but capitalization wanes 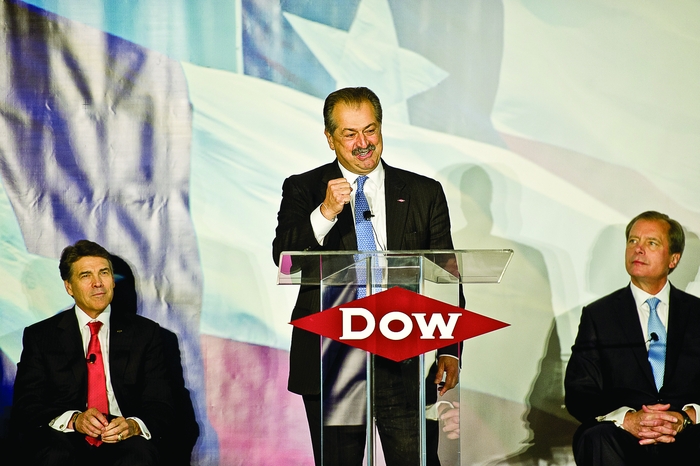 C&EN’s latest survey of the Top 50 U.S. chemical companies illustrates two seemingly contradictory trends. Companies’ sales and profits climbed robustly last year, and chemical deal-making was strong. Both are signs of a strong industry. On the other hand, chemical stocks mostly slumped, a harbinger of weakness. 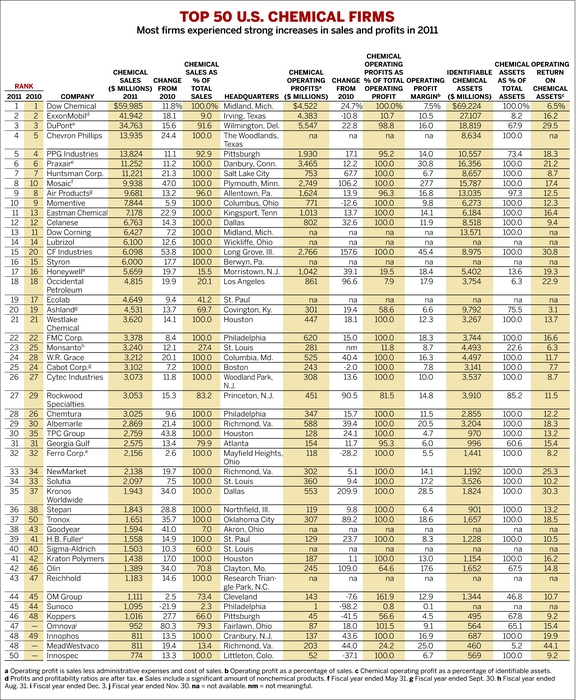 This is no paradox. A lot can happen in a year. And 2011, the year that provided the financial results for the ranking, saw its share of ups and downs. The economic recovery was strong until late last summer, when the business world started worrying about European sovereign debt. The strong business environment early on was enough to lift results for the year. But investors ended 2011 with weakened confidence, to the detriment of stock prices.

Of the 50 firms, only one, Sunoco, posted a sales decline. The company, which has been gradually exiting the chemical industry, sold its polypropylene business to Brazil’s Braskem in 2010. In 2011, it sold a phenol plant in Philadelphia to Honeywell, whose nylon business made it a longtime customer of the plant. Later in the year, Sunoco sold a phenol plant in Haverhill, Ohio, to Goradia Capital.

Profitability was remarkably strong during 2011. The 42 firms that provided earnings figures posted a combined $39.6 billion in operating profits. This represents a 27.0% increase over 2010, a year that itself was a record for the Top 50 U.S. chemical makers in terms of profitability.

Of the 42 companies, only eight posted a decline in profits. Not a single firm posted a loss for the year. 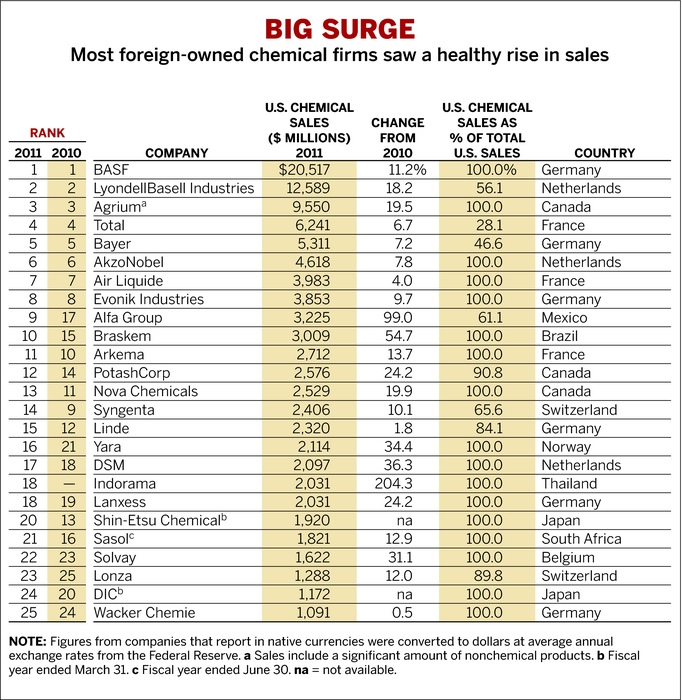 Most foreign-owned chemical firms saw a healthy rise in sales.

A couple of sectors stand out in terms of profitability. Fertilizer producers Mosaic and CF Industries both racked up triple-digit gains, demonstrating how high prices for agricultural goods can produce a windfall. Similarly Monsanto, which in 2010 posted a loss because of competition from generic versions of its glyphosate herbicide, Roundup, saw its fortunes reverse in 2011. The company’s crop protection chemical business earned $281 million.

Makers of the pigment titanium dioxide, which has been in relatively short supply, also posted impressive gains. Kronos Worldwide posted a 209.9% increase in earnings to $553 million, and Tronox’ profits climbed 89.2% to $307 million. This is another sharp reversal: Tronox just emerged from bankruptcy in early 2011.

In contrast to sales and earnings gains, chemical stock prices posted declines for the year. The 35 publicly traded chemical firms in the Top 50 had a combined market capitalization of $237.2 billion at the end of 2011, a drop of nearly 10% compared with the end of 2010. Twenty-four of the firms saw share prices fall over the course of 2011.

The biggest loser was Ferro, which took a tumble when its second quarter earnings missed analysts’ estimates. The company lost two-thirds of its market value in 2011. Four firms—Mosaic, Huntsman Corp., OM Group, and Omnova—lost at least a third of their value. 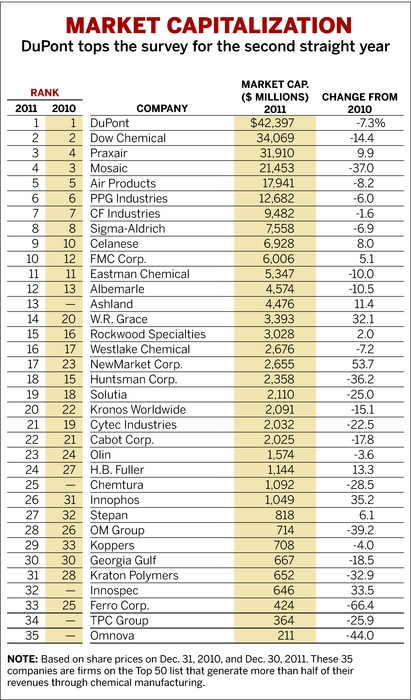 DuPont tops the survey for the second straight year.

A few of the chemical companies were big gainers though. The biggest was NewMarket, which saw its stock value rise in excess of 50%. The other double-digit gainers are Ashland, W.R. Grace, H.B. Fuller, Innophos, and Innospec.

For the year ahead, Dow Chemical Chief Executive Officer Andrew N. Liveris believes that the U.S. economy will see a continual strengthening, while the European results of chemical firms will remain weak.

“In the U.S., we see improving consumer confidence coupled with cautious optimism on housing starts and remodeling investments,” he told analysts at his year-end earnings conference call. “Add to that tailwinds in the industrial sector driven by the country’s abundant access to low-cost natural gas, which enables low-cost exports, and it is easy to see why we anticipate improvements across a variety of sectors in this country.”

The only bright spot in Europe, Liveris noted, has been Germany. “However, the rest of the region continues to struggle with structural competitive issues and debt constraints,” he said.

Liveris’ company once again headed C&EN’s ranking. In fact, each of the 10 companies leading the list this year was among the top 10 last year as well, although there was some jostling among the firms. Chevron Phillips Chemical, fourth this year, switched places with number five PPG Industries. Mosaic, Air Products & Chemicals, and Momentive played musical chairs for the number eight through 10 spots.

C&EN ranks U.S. chemical producers by sales of chemicals and allied products except pharmaceuticals. Ranking the companies by chemical sales is the only way that privately held companies and some diversified producers can be included.

C&EN also provides a ranking of U.S. firms based on market capitalization. These are 33 companies that have had listings on major U.S. stock exchanges during a comparable year-over-year period and that generate a majority of their revenues via chemical manufacturing. Because companies don’t necessarily report chemical and nonchemical sales separately, nonchemical products often creep in. For instance, DuPont’s agriculture and nutrition segment includes sales of seeds and agrochemicals. Monsanto, on the other hand, reports seeds and agrochemicals separately.

C&EN does not normally restate prior-year results other than to update foreign company results for current exchange rates or, occasionally, for changes in accounting procedures that otherwise would prevent year-over-year company comparisons. Neither does C&EN routinely restate prior-year rankings.

In the ranking of foreign-owned companies, C&EN uses sales administered by the firms’ U.S. headquarters. These figures are as close to U.S. sales as possible, but companies don’t post regional sales consistently. For example, Solvay provides sales for the U.S., whereas BASF reports them for North America. A global ranking of chemical producers is scheduled to appear in the July 25 issue of C&EN.

Mergers and acquisitions always leave a mark on the Top 50, but this year the impact of deals is outsized. Four firms disappeared because they were acquired. Water treatment chemical company Nalco, number 17 last year, was purchased by institutional cleaning firm Ecolab in December. Three Ecolab operating segments—water, paper, and energy services—are remnants of the old Nalco. Ecolab joins the list at number 19 with $4.6 billion in chemical sales.

Ineos Nova, a styrenic polymers joint venture between Ineos and Nova Chemicals, disappeared. It was taken over by Ineos and then subsequently folded into a new European joint venture with BASF called Styrolution.

Transactions also left a mark on C&EN’s ranking of the U.S. sales of foreign chemical producers. The Arch purchase helped lift Lonza from number 25 to number 23. Rhodia, number 22 in last year’s ranking, was purchased by Solvay, which is number 22on the list this year.

Mexico’s Alfa Group propelled itself from number 17 to number nine through acquisitions. The company’s DAK Americas PET unit purchased the remnants of Eastman Chemical’s PET business in February 2011 and bought out Wellman in September. Similarly, the purchase of Sunoco’s polypropylene business raised Braskem’s ranking from 15 to 10.

This year has yet to bring many acquisitions of the size to make a mark on the 2013 ranking. Eastman Chemical, number 11, has a pending acquisition of number 34 Solutia. Westlake Chemical, number 21, made a hostile bid for number 31 Georgia Gulf in January. However Westlake dropped the bid last week (see page 20). DuPont’s coatings business is rumored to be on the auction block, but signs of a deal have yet to emerge.

After declining significantly in the second half of 2011, the pace of deal-making so far this year has gradually increased, notes Christopher D. Cerimele, director of the chemicals practice at the investment banking firm Houlihan Lokey. “Most people going into the year were thinking that this would be a little bit more of an active market than it has been,” he says. But the first half of the year has been stronger than the second half of 2011, Cerimele observes. On the basis of discussions in the mergers and acquisitions market, he believes the remainder of 2012 will be stronger still.

And the second half of the year awaits. However, it is unlikely that any deals will be struck in time to have much of an impact on next year’s Top 50 ranking.