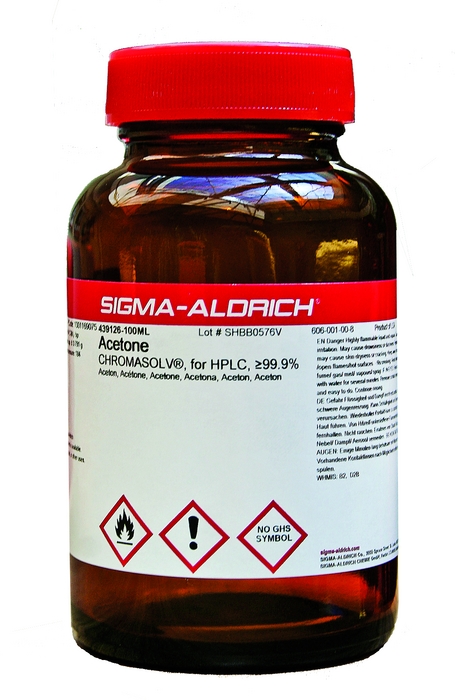 Credit: Sigma-Aldrich
Chemical labels will include standard items, such as pictograms representing hazards.

The Occupational Safety & Health Administration released in March a long-awaited update to its Hazard Communication Standard, the regulation that determines how chemical safety information is relayed to workers. The revisions will bring to scientists in the U.S. new safety data sheets and new labeling—including a set of nine hazard-alerting pictograms that lab workers should memorize.

The revised standard will create more consistency in how chemical information is communicated, said Secretary of Labor Hilda L. Solis when she announced the final standard. Whereas the previous standard focused on performance—manufacturers could create labels and material safety data sheets however they wanted, as long as they included required information—the revised standard is more prescriptive. Labels must contain specific hazard pictograms, signal words, hazard and precautionary statements, and product and supplier identification information. Safety data sheets (SDSs; “material” is now dropped) must follow a uniform format with a set outline.

The revisions bring the U.S. in line with the international Globally Harmonized System of Classification & Labelling of Chemicals adopted by the United Nations in 2002 and by many countries since. OSHA largely followed the international system, but the agency did have to make some parts optional because it lacks regulatory authority in those areas.

Companies operating globally may already be following the UN or similar American National Standards Institute standard, says Tom Pieper, senior supervisor of product safety and labeling at Sigma-Aldrich, so chemists might not notice significant changes in products from some manufacturers. Sigma-Aldrich, for example, was already following the UN standard for SDSs.

Nevertheless, it’s important for laboratory and other workers to understand how to read the labels and to be clear about what the information on labels and in SDSs means, says Lori Seiler, associate director for environmental health and safety in research and development at Dow Chemical. That understanding is critical for working safely with chemicals.

The revised standard in particular dictates that chemical labels and SDSs include one or more of eight pictograms that represent health and other hazards, including flammables, corrosives, oxidizers, explosives, and gases under pressure. “The biggest thing for the bench chemist to learn is the hazards that are associated with those pictures” so the scientist can quickly determine the hazards of particular chemicals, says R. J. Wolcik, environmental health and safety specialist at Strem Chemicals.

The standard includes a framework for classifying chemicals by their hazards, so labeling should be consistent from one manufacturer to another. The severity of a hazard may determine which pictogram is associated with a chemical. For example, whether a particular toxic substance gets labeled with an exclamation mark or skull and crossbones depends on its median lethal dose.

A ninth pictogram for aquatic toxicity is optional, because environmental hazards in the U.S. are regulated by the Environmental Protection Agency rather than OSHA. There is also a category called “hazards not otherwise classified” for substances that can cause death, illness, or injury to workers but that are not currently covered by classification criteria.

In addition to the pictograms, labels and SDSs must also include a signal word and hazard statements. The signal word is either “warning” for less hazardous materials or “danger” for those that are more hazardous. The hazard statements are specific to particular chemicals and the risks they pose, such as “highly flammable liquid and vapor” or “may cause liver and kidney damage.”

The inclusion of exposure controls and personal protection in SDSs should be particularly helpful to bench chemists, says Kim Gates Auletta, a lab safety specialist at the State University of New York, Stony Brook. For the first time SDSs “are going to have to specifically say what kind of gloves to wear,” she says. She still recommends cross-checking against a glove compatibility chart, but she thinks that having the information on the SDSs will prompt more scientists to consider glove material.

SDSs may also have optional sections on ecological information, disposal considerations, transport information, and regulatory information. As with the aquatic toxicity pictogram, these sections are not required because they are beyond OSHA’s regulatory purview, but companies including them to conform to regulations in other countries won’t need to delete them for the U.S.

One potential point of confusion about the new hazard classes is that different types of hazards will be ranked by severity, starting with “1” as the most hazardous. But not all classes have the same number of ranking levels. Oxidizing gases are all categorized as “1,” for example, whereas flammable liquids are ranked into four categories, depending on their flash points. And the severities cannot be compared between hazard classes—one class’s category “1” is not necessarily more dangerous than another’s category “2,” Gates Auletta notes.

The order of rankings is also the reverse of those used on U.S. National Fire Protection Association diamonds, which use “0” for least and “4” for most hazardous.

Overall, the revised hazard communication standard will give chemical users “more complex but better, more thorough information,” says George Bleazard, Sigma-Aldrich’s corporate director of environmental health and safety, transportation compliance, and product safety. It is important for chemists and other employees to understand the new system and take advantage of that information for everyone’s safety