Navigating The Slump In Fine Chemicals 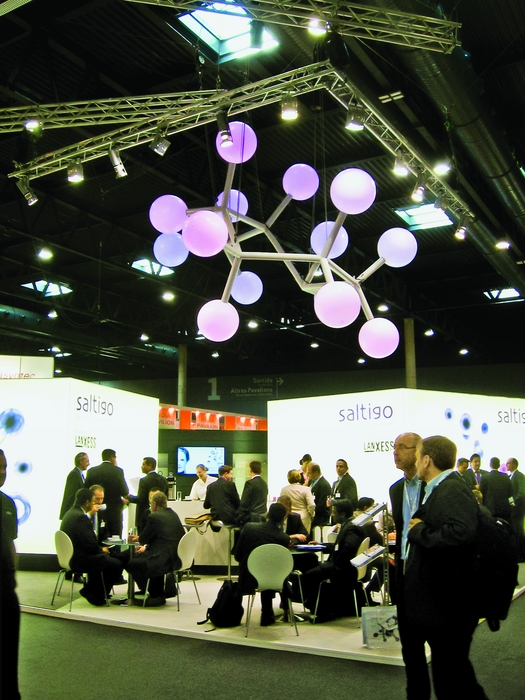 The road to recovery in the fine chemicals industry wound through Barcelona last month, where attendees at the annual Chemspec Europe exhibition reported slow, steady recovery from the recession. Although many companies exhibiting at Chemspec pursue pharmaceutical markets, which have been affected mostly by restructuring at the major drug companies, discussion of Europe’s protracted economic woes was inevitable.

News broke the weekend before the event that Spain accepted the largest European financial bailout to date, joining Greece, Portugal, and Ireland among the countries receiving aid from the European Union to shore up banks. But even this news was taken in stride by chemical suppliers inured to doing business in a tough economic environment.

“I wouldn’t say that it’s a major concern of ours,” said Wolfgang Schmitz, managing director of Saltigo. “Overall trends are okay in talks with major customers.”

Agricultural chemicals, a key focus at Saltigo, are showing particular strength, according to Schmitz. “The basic trends in food, animal feed, and fuel are going well,” he said, but business cycles have been more dramatic in recent years. “In the past, there has been calm development and growth. Now there are spikes—positive and negative—influenced by commodity prices, which are the subject of speculation.”

The cycles create working capital and inventory issues that require companies to work very closely with customers, Schmitz explained. “You have to become part of their supply chain,” he said. For example, two years ago the firm expanded agricultural chemicals capacity in Leverkusen, Germany, with a $65 million investment from Syngenta, a key customer. Saltigo received a global sourcing award from Syngenta during the crop protection firm’s annual suppliers conference, held during Chemspec.

In contrast to generally good agricultural chemical prospects, pharmaceutical chemicals markets are under pressure as a result of drug approval declines and cost-cutting in health care systems, according to Schmitz. Saltigo has narrowed its emphasis to working on active pharmaceutical ingredients (APIs) in late-stage clinical trials, he said. “We are choosing projects more carefully. It is the best way to manage risk.”

The company has also restructured its business, combining what had been a separate pharmaceuticals unit with its agricultural and fine chemicals unit. The main impetus for the reorganization, according to Jörg Schneider, marketing director for Saltigo, is the failure of the pharmaceutical unit to meet certain goals.

In addition to tightening its focus on late-stage pharmaceuticals, Schneider said, Saltigo will now place a heavier emphasis on agricultural chemicals. Schmitz added that Saltigo will increase its emphasis on non-life-sciences chemicals. “We will be exploring electronic chemicals as a possibility,” he said.

AllessaChemie, a German fine and specialty chemicals firm, is also seeing sluggish demand for drug chemicals, according to Michael Hassler, director of marketing and business development. “Pharma is still very slow,” Hassler said. “It depends which projects you are working on, and there is still life in generics. But overall it is not improving.”

Echoing Schmitz, Hassler noted that agricultural chemicals are showing strength. “We are at the peak of an upswing. It will slow down, but the general trend is positive,” he said, adding that the firm’s sales grew 10% to $200 million last year.

But cautionary signs loom related to the economy. “We are seeing the first signs of—I wouldn’t call it a crisis—some concern,” Hassler said. Sales of pigments and other chemicals tied to housing and automotive markets are in trouble, he said, adding that AllessaChemie does half its business in non-life-sciences markets. One bright spot, he said, is oil-field chemicals.

The trend toward adding finished-drug capabilities has advanced in fits and starts, however. Many in the industry view API and finished-drug manufacturing as fundamentally different businesses that are difficult to integrate. “Finished dosage is physics,” said Markus Blocher, CEO of Dottikon Exclusive Synthesis, another Swiss API specialist, referring to crystallization, milling, and other processes involved in producing pills and tablets. “We do chemistry.”

Like Saltigo, Dottikon is focusing on customer drug candidates in late-stage clinical development. Dottikon’s emphasis, however, is on corrective chemistry, improving the synthesis of molecules that have been expedited through development by drug firms that have cut back on process R&D.

Seeing a growing need for chemistry services in late-stage development, Dottikon launched a synthetic-route-finding service, hiring chemists and increasing its R&D spending from 10% to 12% of revenue over the past year. The company will return to profitability this year, Blocher said. Dottikon’s sales grew a little more than 1% last year to $84 million, beginning a long climb back to its 2008 sales peak of $157 million.

Consolidation among drug industry customers has fundamentally changed the fine chemicals market over the past four years, Blocher observed.

“The cake is smaller, and the projects are more challenging,” he said. “The idea is to get a bigger slice of the cake.” The firm, which specializes in hazardous reactions stemming from its heritage in explosives, is counting on its chemistry emphasis to serve an increasingly cost-conscious market. “We focus on cost reduction by making something more efficiently and effectively,” he said.

Germany’s Chemie Uetikon emphasizes services such as analytical validation, said Michael Stohlmeier, senior product manager at the company. “We need to fix the chemistry, but the support is more important,” he argued. “You can buy chemistry anywhere, but the service is what distinguishes us from the Chinese—though not necessarily the Indian—suppliers.”

Indeed, as in past years, attendees at Chemspec maintained that business is returning to Europe and the U.S. from Asia. This shift is caused largely by the need for services beyond manufacturing. Prices in China have also increased as Chinese and U.S. regulatory standards tighten.

“There is movement back to the West,” said Michael A. Kucharski, CEO of VanDeMark, a Lockport, N.Y.-based phosgene chemistry specialist. His firm’s sales increased about 20% last year, Kucharski said, but growth will likely slow in 2012 because of economic pressures and exchange rate effects. U.S. business is increasing, however, and the company is hiring. “The problem,” he said, “is finding people.” 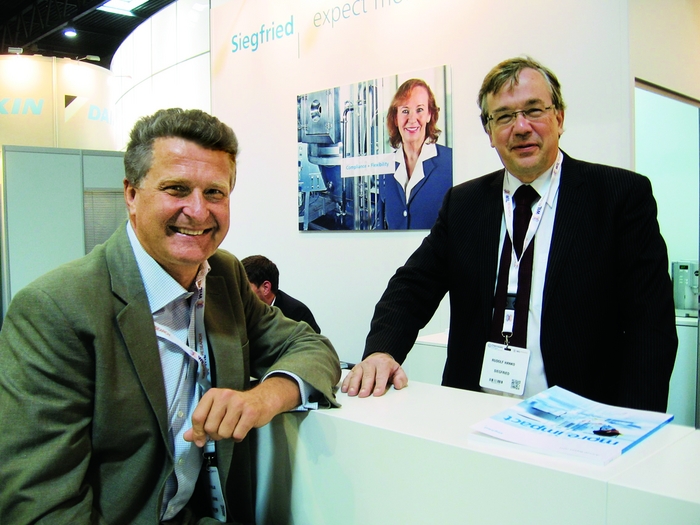 The challenges of supplying contract manufacturing services to the pharmaceutical market were addressed during a panel discussion. “Pharma is changing, and research and development is moving toward external resources,” said panelist Matthias Urmann, associate vice president of R&D at Sanofi. He described a blurring of the lines between internal and external research in the drug industry and the emergence of long-term relationships built around API production and research support.

Siegfried’s Hanko and Guy Villax, CEO of Portugal’s Hovione, representing contract manufacturers on the panel, emphasized the suppliers must offer a broad mix of services that cater to drug firms that are increasing their use of outsourced research and manufacturing. Both emphasized the need to explore finished-dose drug services.

Villax said drug companies are looking for innovation and flexibility, and service providers have to offer a custom fit. “Whatever it takes, we need to do it,” he said. “In APIs, if all you care about is chemistry—if you want to live in little boxes and silos—you are headed for the graveyard.” He noted that Hovione, which did not exhibit at Chemspec, has developed inhalers as an outgrowth of formulation services.

Panelists emphasized that purchased chemistry services have become an integral part of the value chain for major drug companies. Hanko added that this role will require greater resourcefulness on the part of service providers. “Our customers want us to take on risk, and we are willing to do so,” he said. “We need to be willing to customize our services.”

According to Chemspec’s organizers, Quartz Business Media and Speciality Chemicals Magazine, attendance, at about 5,000, was comparable to that at last year’s event in Geneva. The number of nonexhibiting visitors was up 20%. The number of exhibit booths fell to 400 from about 450 last year. Quartz said fewer Chinese firms exhibited this year.

“Overall, given the current state of the economy at this time, particularly in Spain and indeed in the wider eurozone, we were very satisfied with the show’s performance,” said Steve Diprose, vice president of Quartz.

Attendees expressed satisfaction with this year’s exhibition, but in a sector that seems to see at least one new conference added each year to an already-packed calendar, trade show fatigue is inevitable. “The show was better than expected,” said AllessaChemie’s Hassler, “but expectations were somewhat mixed regarding who would make it to Barcelona. Pharma companies aren’t here, but the agchem guys are here. We are meeting with meaningful visitors here and in good numbers.”

Business
Mood is bright at new drug ingredients show
Business
Optimism Reigns At Chemspec
Business
Pharma Chemical Rebound Is Apparent At CPhI Meeting
Share X
To send an e-mail to multiple recipients, separate e-mail addresses with a comma, semicolon, or both.
Title: Navigating The Slump In Fine Chemicals
Author: Rick Mullin
Chemical & Engineering News will not share your email address with any other person or company.