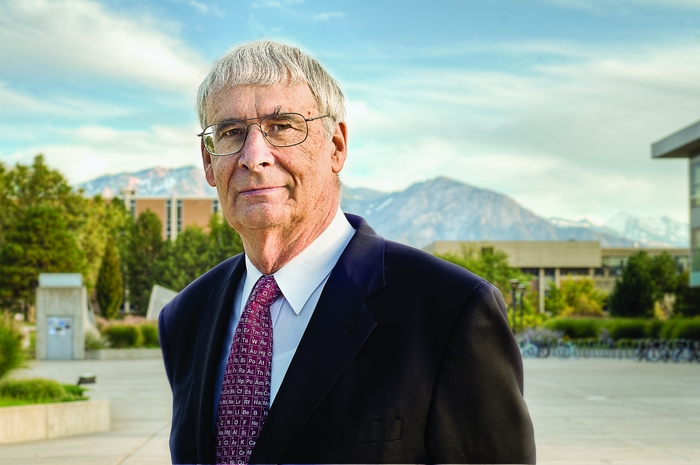 Peter J. Stang, Distinguished Professor of Chemistry at the University of Utah, will receive the American Chemical Society’s most prestigious honor, the Priestley Medal, in 2013. The society is recognizing Stang, 70, “for his preeminence in organic chemistry and pioneering of abiological self-assembly and supramolecular chemistry using the directional bonding approach.”

“I’m truly pleased and honored to receive this award,” Stang says. “It means a lot to me because it also recognizes the work of my coworkers, postdocs, and graduate and undergraduate students.”

Madeleine Jacobs, ACS’s executive director and chief executive officer, says, “In addition to his scientific accomplishments, Peter Stang has made truly extraordinary contributions to the service of chemistry writ large and to ACS in particular.” In selecting Stang, ACS cited his efforts to enhance the society’s prestige internationally and his service as editor-in-chief of the Journal of Organic Chemistry from 2000 to 2002 and of the Journal of the American Chemical Society from 2002 to present.

After completing his Ph.D. at the University of California, Berkeley, in 1966 and a postdoctoral position at Princeton University in 1968, Stang joined the faculty of the University of Utah. During his 43-year career at Utah, he rose from assistant professor in 1969 to dean of the College of Science in 1997. He has more than 480 publications and some 22,000 citations to his name and has mentored nearly 100 graduate students and postdoctoral fellows.

He is a distinguished fellow at the Loker Hydrocarbon Research Institute at the University of Southern California and an honorary chemistry professor at the Chinese Academy of Sciences’ Institute of Chemistry in Beijing and at Zhejiang University in Hangzhou, China.

Stang’s numerous major scientific contributions began in the 1960s, with his synthesis of vinyl trifluoromethanesulfonates, which play key roles in cross-coupling reactions.

Julius Rebek Jr., director of Skaggs Institute for Chemical Biology and a chemistry professor at Scripps Research Institute in La Jolla, Calif., who is considered one of the founding fathers of supramolecular chemistry, notes in particular Stang’s synthesis of molecular squares in the 1990s, which he says inspired the development of numerous discrete, functional self-assembled systems.

In addition, Rebek says, “his service as editor at JACS has nurtured supramolecular science in general.” Stang’s editorships at JOC and JACS have also garnered him praise far beyond the supramolecular community.

“He has brought to both publications his commitment to research excellence and editorial rigor,” says Brian Crawford, president of the ACS Publications Division.

Stang spearheaded numerous advancements in the design and presence of both journals, including rotating cover art and table-of-contents graphics. During his tenure, the number of manuscripts submitted to JACS each year has doubled, and the number of citations the journal receives annually has nearly doubled.

Jacobs also commends Stang’s work in arranging ACS delegations to China in 2005 and his work as ACS councilor. “How does he accomplish all this? I’m convinced that Peter never sleeps,” she says.

Comments
M. Ebbing (July 24, 2012 4:58 AM)
Just remember that the Nobel Prize in Chemistry 1987 was awarded to Prof. D.J. Cram, J.-M. Lehn & C.J. Pedersen "for their development and use of molecules with structure-specific interactions of high selectivity", therefore, in my opinion, they should be considered the founding fathers of supramolecular chemistry.
Reply »

Partha Sarathi Mukherjee, Indian Institute of Science, Bangalore (August 16, 2012 11:39 AM)
Hearty Congratulation to my mentor Peter, who is a key player in directional coordination-assembly.
Partha
Reply »

S. Shanmugaraju (August 31, 2012 11:42 AM)
Dear prof,
very hearty congratulation! for this award. You are inspiring source of many young students all over the world and well deserved for this. Once again my best wishes.....
shanmugaraju
Reply »

SH from China (September 9, 2012 9:52 PM)
Prof Stang is not only an eminent scientist but also a great friend of all over the world! Congratulations!
Reply »

Gary E. Arevalo (October 31, 2012 11:47 AM)
Dr. Stang, thank you for all your contributions to science. You have done amazing work that will impact current and future generations to come.
Reply »

Pengcheng Duan (January 1, 2013 11:06 AM)
congratulation!you are so great in the domain of supramolecular chemistry.
Reply »

anurag mishra (January 18, 2013 12:56 AM)
Many many congratulations to Prof. Stang!! he is one of the best platinum based supramolecular chemist..he discovered many Pt based cyclic coordination driven compounds.
Reply »

Mohammad (February 9, 2013 1:25 PM)
Dear prof.
I am so glad for your award. Congratulation.
Your sincerely
Mohammad Behbahani. Iran
Reply »

Reza Kia (March 22, 2013 9:22 AM)
Congratulation to Prof. Stang who is deserve for the highest Scientific medal in ACS.

BY (September 16, 2013 2:12 AM)
Congratulation to Prof. Stang who is deserve for the highest Scientific medal in ACS.
Reply »