Trying to put problems behind them, suppliers of polymers for medical devices look to grow product lines

SPINAL TAP
[+]Enlarge
Credit: iStockphoto
Plastic or metal implants can be used to realign out-of-place vertebrae along the spine. 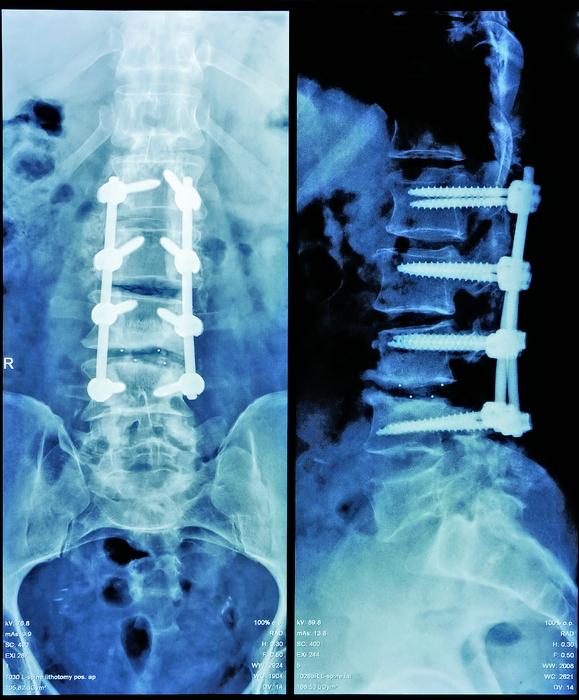 Credit: iStockphoto
Plastic or metal implants can be used to realign out-of-place vertebrae along the spine.

Polymer suppliers haven’t forgotten the bitter lessons that can come with the use of their materials in medical devices. They know all too well Dow Corning’s nine years in bankruptcy, which ended in 2004, and the $3.2 billion the firm agreed to pay to women who claimed that silicone breast implants made them ill.

Today, however, polymer suppliers can count on the legal protections of the Biomaterials Access Assurance Act of 1998. And as new opportunities arise to put polymers to work in medical devices that improve and extend life for aging, ill, and injured people, polymer makers are again embracing implants, albeit cautiously. Some are even pushing the envelope and developing polymers that alleviate suffering by mimicking cartilage or making it possible for new organs to grow from a patient’s own tissue.

Polymer companies such as DSM, Evonik Industries, Solvay, and Eastman Chemical now insist on contracts with medical device makers that strictly limit their liability in the case of a device failure. Thanks to new liability protections and new market opportunities, even Dow Corning has increased its activity as a supplier of resins for medical use, says James D. Stephenson, the firm’s global health care market manager.

Recent acquisitions point to the growing attraction of the medical sector. In June, DSM spent $360 million to purchase Kensey Nash, an Exton, Pa.-based maker of materials such as resorbable collagen-based vascular closure and hernia tissue repair patches. The acquisition establishes DSM Biomedical as a profitable business, the firm told investors at the time of the deal.

German specialty chemical maker Evonik has also enlarged its involvement with medical polymers recently. In early 2011, it acquired Boehringer Ingelheim’s Resomer line of lactic acid and glycolic acid biodegradable polymers, used to make surgical screws, nails, and plates. The acquisition added to a portfolio of resins for medical use including polyether ether ketone (PEEK) for ortho­pedic implants, nylons for catheters, and methacrylic polymers for contact lenses.

Later in the year, Evonik bought the pharmaceutical business of Eden Prairie, Minn.-based Sur­Modics, which included resorbable polymers for implants.

None of the resin makers reveal the size of their medical polymer businesses, preferring instead to speak broadly of the field’s growth potential. DSM, for instance, predicts that its medical polymer and biobased chemicals and fuels businesses will have combined sales of $1 billion by 2020.

DSM won’t say how much of that figure will come from medical polymers, but it insists the opportunities are large. In a recent presentation to investors, the Dutch firm said worldwide sales of medical devices exceed $150 billion per year and are growing by 8 to 10% annually.

Global sales of polymers used in medical devices exceeded $2 billion in 2011, according to market research firm Frost & Sullivan. That number includes polymers for prosaic nonimplantable devices such as medical tubing and gloves, as well as for devices such as sutures or catheters used in the body for less than 30 days. Frost analyst Tridisha Goswami says she has no current data on market size of polymers used for long-term implants.

Goswami notes that plastics often replace metals in surgical applications, where their weight, flexibility and strength, and cost are an advantage. As a result, she says high-performance plastics sales will grow by about 9% per year compared with 6% for competing metals. In orthopedic implants, such as replacement hips and knees, plastics don’t form problematic debris that cause artificial joints to wear out quickly, she notes.

In discussing the Kensey Nash acquisition with reporters in a May conference call, Feike Sijbesma, DSM’s chief executive officer, said the U.S. firm “positions us as a major material supplier to the medical device area.” With about 325 employees and projected 2012 sales of about $89 million, Ken­sey Nash “is one of the biggest players in the field,” Sijbesma said.

Other DSM biomedical initiatives include the 2011 formation of a 50-50 joint venture, Actamax Surgical Materials, with DuPont. It is developing adhesion prevention, tissue sealing, and other surgical applications for a family of biodegradable polyethylene glycols and oxidized dextran polymers developed by DuPont. Earlier this year, DSM made an investment in Regentis Biomaterials, an Israeli start-up firm that is developing biodegradable hydrogels to repair damaged cartilage and bone.

Evonik’s recent acquisitions “are clear indications of our desire to expand in the medical device market,” says Thomas Riermeier, vice president of the firm’s pharma polymers and services business. The company is also beefing up R&D in polymers for medical use with biomaterials designed to help repair soft tissue, skin, and bones.

However, Paul Spencer, Evonik’s global head of biomaterials, points out that the firm keeps a keen eye on controlling its liabilities. “Our materials are designed to be safe and functional and are sold on the basis of material specifications which meet our customers’ specific requirements,” he says.

The company closely scrutinizes applications for implantation in the body for more than 30 days, Stephenson says. But it does supply silicones, as it did even during the breast implant controversy, for such things as hydrocephalus shunts and implanted defibrillators. And since 2009, it has renewed its emphasis on the health care business because of growth trends, he says.

These days, Dow Corning is working with customers to add active materials to silicones so they have antimicrobial, anti-inflammatory, or antirejection properties. “We’re looking at ways to add value to keep our products from becoming commodities,” Stephenson says. 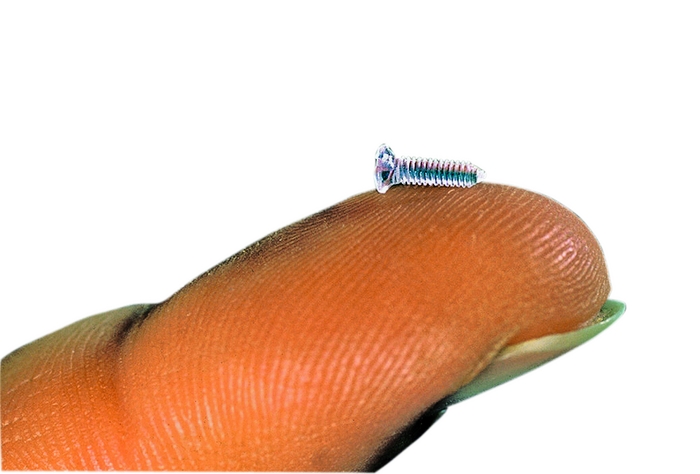 Credit: Evonik
This resorbable screw keeps plates in place while doctors repair injuries to the upper jaw and face.

Medical device makers are the real force behind increased use of plastics to replace metals, says Shawn Shorrock, global health care market manager for Solvay. Plastics not only can reduce the cost of implants, she says, but they also have properties closer to that of bone for hip and knee replacement.

In 2007, Solvay began to sell high-end performance plastics including PEEK, polysulfone, and polyphenylsulfone to the medical device industry under the Solviva name. Like other polymer executives, Shorrock is clear about Solvay’s responsibilities to device makers.

“While we are the material experts, our customers are the device experts,” she says. “The key is meeting product and customer specifications.”

Some polymer firms are pushing the envelope by enabling device makers to go beyond the ordinary. Bob Ward, who sold Polymer Technology Group to DSM four years ago, now heads both an incubator for life sciences business start-ups, called Emergence Venture Partners, and the start-up firm ExThera Medical, which is developing a device to clear blood of bacteria and viruses, as well as their toxins.

ExThera’s device, Ward says, is a blood filter that uses ultra-high-molecular-weight polyethylene beads coated with a form of the anticoagulant heparin to bind bacteria such as antibiotic-resistant Staphylococcus aureus. Ward says clinicians believe the polymer-supported device may be an effective treatment for bacteria in the blood and eventually for sepsis, a potentially deadly response to infection.

The filter will undergo clinical trials in the U.S. and Europe starting in 2013. So far, Ward says, ExThera has raised $10 million from investors to advance the new therapy.

Another firm launched by Ward’s Emergence incubator, Biomimedica, has developed a reparative polymer. Located in South San Francisco, Biomimedica makes a polyurethane composite that mimics human cartilage. It will undergo clinical trials in Europe next year. In June, the firm raised nearly $12 million from investors.

About a year ago, Alexander M. Seifalian, a professor of nanotechnology and regenerative medicine at University College London, fashioned a POSS-polyurethane composite into a trachea. He seeded the composite scaffold with stem cells from a terminally ill cancer patient and replaced the cancerous trachea with the new seeded scaffold.

Seifalian says that the patient is doing well and is back in graduate school. Seifalian says he has a grant from the European Union that will allow him to do “many more” trachea implants. He has also developed tear ducts, ears, and noses that he will soon place into patients using the scaffold technique.

POSS’s porosity allows transport of nutrients to and wastes away from cells, says Joseph D. Lichtenhan, president of Hybrid Plastics. And one of the major advantages of an artificial body part seeded with a recipient’s own cells, Lichtenhan says, is that the body’s immune system is unlikely to reject it.

The use of POSS and other polymers to help replace limbs of people who lose them because of disease, accidents, wear, or war injuries is the right thing to do, Lichtenhan says. He is delighted to make a profit in the endeavor, and he also feels strongly that “it is inhumane not to provide the materials for these needs.”