[+]Enlarge
Credit: Carlye Calvin/UCAR
An iconic image of Yellowstone National Park is featured mosaic-style on ends of many of the 100 computer racks that make up the new Wyoming supercomputer. 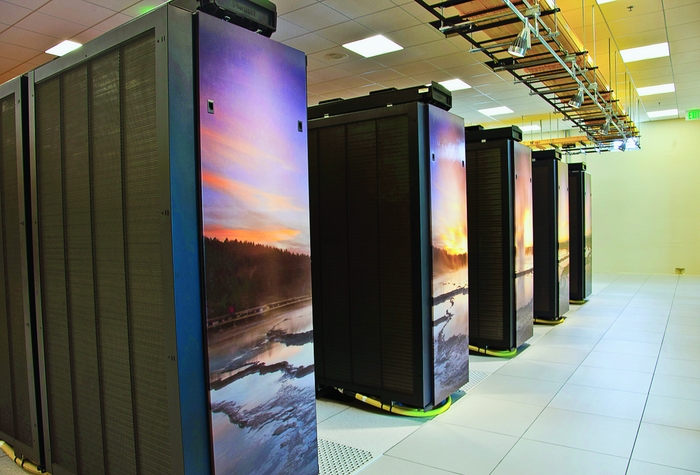 Credit: Carlye Calvin/UCAR
An iconic image of Yellowstone National Park is featured mosaic-style on ends of many of the 100 computer racks that make up the new Wyoming supercomputer.

One of the world’s top 20 fastest supercomputers, dubbed Yellowstone, began operations last week in Cheyenne, Wyo., where it will be used to investigate complex geoscience research questions about weather, earthquakes, and climate change. Housed near the University of Wyoming, Yellowstone is the only supercomputer intended for studies of natural systems, say its developers at the National Center for Atmospheric Research in Boulder, Colo. NCAR is part of a new science consortium in the West that includes the National Renewable Energy Laboratory in Golden, Colo., and UW Cheyenne.

“Whether it’s better understanding of tornadoes and hurricanes or deciphering the forces that create geomagnetic storms, Yellowstone will lead to improved forecasts and better protection of the public,” says Thomas J. Bogdan, president of the University Corporation for Atmospheric Research, which manages NCAR on behalf of NSF.

NSF had encouraged NCAR to place the new super­computing facility in Wyoming. Both UW and the state helped fund the project. The Cheyenne site has the advantage of adequate electrical power available for a new data center, as well as physical space for future expansion, NCAR says. Some 20% of Yellowstone’s time is set aside for UW-related research. The balance of computer time will be allotted on a competitive basis to researchers who will use remote connections to the computer.

At peak performance, Yellowstone can operate at 1.5 petaflops, or 1.5 thousand trillion floating-point operations per second. Yellowstone is nearly 30 times more powerful than Bluefire, the NCAR supercomputer it replaces, which had been in operation since 2008.

Some 11 research projects are already scheduled for time on Yellowstone. They include examination of ocean fronts and turbulence; three-dimensional mapping of Earth’s upper crust; highly detailed climate-change simulations; complex air pollution projections; solar magnetism and electricity in space; and turbulent, stratified, rotating fluids that mimic tornadoes, hurricanes, and other aspects of Earth’s atmosphere.