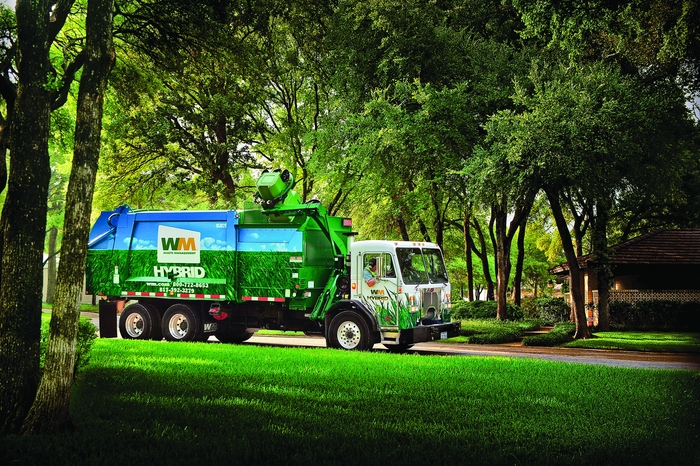 Those ubiquitous green garbage trucks operated by Waste Management may soon be making fewer stops at landfills. The solid-waste handler has invested in a portfolio of start-up firms that view the payload in those trucks not as trash but as treasure.

Waste Management is North America’s largest solid-waste hauler. Each year it collects 90 million tons of waste from its municipal, commercial, and industrial customers. The company would like to reduce the amount of this material—about 70% today—that goes to landfills or incinerators .

At the same time, start-up firms developing renewable fuels and chemicals are looking for raw materials that are cheaper than sugar or cellulosic leftovers from agriculture. Thus, Waste Management is partnering with Fulcrum BioEnergy, Enerkem, Agilyx, and other companies seeking to make fuels and chemicals from inexpensive inputs. For most of these firms, zero-cost feedstock is what makes their projected cost of production competitive with that of routes based on petroleum or corn sugar.

“On paper, waste is hands down the best feedstock in the alternative fuels or chemicals space,” says Andrew Soare, an analyst at market research firm Lux Research. “They can get it cheap, maybe for free or even at negative cost. And there’s a lot of it.”

For start-ups, working with Waste Management not only brings in the trash but also includes logistics, business know-how, and financial support. Yet the companies still face one major hurdle—dealing with all the oddities in people’s trash. “In reality, the process to convert it is difficult because it is so heterogeneous compared to cellulosic or sugar-based processes,” Soare says.

Waste Management doesn’t pretend to know what mix of handling process, conversion technology, and business planning might prove to be the magic combination. William Caesar, the company’s president of recycling services and organic growth, expects some of the start-ups he invests in will fail. But he is committed to finding ways to divert more material from landfills.

“It is a customer demand that I have to meet. I have to go out and see what is out there to enable me to accomplish diversion but also to generate incremental value for my shareholders in the process,” Caesar explains.

When Waste Management invests in a waste-based start-up company, it generally joins with three or four venture capital investors. But unlike them, Waste Management considers itself a strategic investor, rather than just a financial one. “A strategic partner provides guidance and counsel to management on parts of the process that occur outside of their walls,” Caesar says.

To draw Waste Management’s interest, a start-up must demonstrate some important capabilities. First, it must be looking to use a waste stream that Waste Management currently has, or expects to have soon, and it needs to take in a meaningful quantity.

Waste Management’s handling processes already remove high-value recyclables from municipal solid waste. Paper, cardboard, glass, metals, and plastics are sorted out with automated equipment. In some municipalities, households do the sorting. In localities that have municipal composting centers, food and yard waste are collected separately or otherwise removed.

Still, most current processes leave behind orphaned materials, including, Caesar says, “recoverable but not valuable plastics, recoverable but not valuable fiber, and other materials such as food waste and organic green waste.” For example, polyethylene terephthalate and high-density polyethylene are frequently recycled, but other types of plastics and films are not.

Additionally, Caesar is on the lookout for companies with technology that effectively sorts, processes, or converts orphaned materials. “You can add significant value by creating a feedstock that is tailored or conditioned to a particular process,” he says. “If you can get everything else out, then you have a feedstock that works at higher efficiency.”

Biobased fuel and chemical companies that are based on agricultural feedstocks tend to rely on biology—such as specially engineered enzymes and microbes—to break down and convert their raw materials. In contrast, several of Waste Management’s partner firms use thermo­mechanical processes. The high-heat approach is better suited to breaking down heterogeneous materials.

For example, Fulcrum and Enerkem use gasification followed by catalysis to convert waste to ethanol. Both companies are currently building large-scale facilities.

“We look at the fraction of the waste that tends to be a little bit drier, and that is typically a large portion that contains fibers, textiles, and some plastics,” says Theodore M. Kniesche, Fulcrum’s vice president of business development. For example, the paper industry considers paper and cardboard that carry food residue to be contaminated. But those greasy pizza boxes make fine fodder for a gasifier.

Fulcrum does have to invest in sorting equipment to remove noncarbon materials such as metals, glass, batteries, dirt, and stones. The remainder is shredded and fed to a plasma gasifier that creates synthesis gas, a mixture of carbon monoxide and hydrogen. After the gas is cleaned up to remove impurities from any contaminants that slip through, it is exposed to a catalyst that converts it into ethanol. 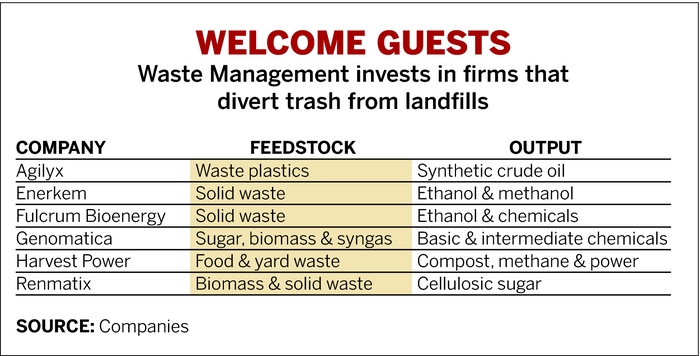 Fulcrum has begun construction on its first municipal plant for converting solid waste to ethanol, located outside of Reno, Nev. The plant is expected to open by the end of 2013 and eventually have production capacity of 10 million gal per year. In addition to investing in Fulcrum, Waste Management will be one of two waste suppliers providing contracts for 20 years of free feedstock.

Enerkem uses a similar front-end process, but instead of a plasma gasifier, it uses a bubbling fluidized bed gasifier. Inside, fluffy feedstock material comes into contact with an inert heat carrier such as sand. Oxygen and steam are then injected. The process uses temperatures of 700–750 °C, about half that of plasma gasifiers, and moderate pressure. The resulting synthesis gas is then catalytically converted first into methanol, then ethanol.

According to Timothy J. Cesarek, Enerkem’s senior vice president for business development, the basic system nets 10 million gal of ethanol per 100,000 tons of dry waste material. Waste Management’s agreement with Enerkem provides feedstocks, financial investment, and the option to collaborate on up to six facilities generating as much as 120 million gal per year.

Beyond that, Enerkem has identified about 70 locations in North America that would be suitable for one of its plants. All are adjacent to major population centers. “The beautiful thing is that where the municipal solid waste is,” Cesarek points out, “is also where the fuel and chemical demand is.” Enerkem is currently building its first two commercial plants in Edmonton, Alberta, and Pontotoc, Miss.

Both Enerkem and Fulcrum are targeting ethanol for now, because of the fuel’s large and ready market. However, “others will probably be part of our future, including renewable diesel, jet fuel, hydrogen, and chemical intermediates,” Fulcrum’s Kniesche says. “The core constant is that they all begin as synthesis gas.”

Another Waste Management partner, Agilyx, also generates its product—crude oil—from a gas phase. The company describes its process as starting with low-value plastics that are not commonly recycled. They are put in a specially designed chamber that brings in hot air, melts the plastic, and turns it into a gas. The gas is then condensed into a synthetic crude oil.

Compared with Enerkem’s and Fulcrum’s large gasifiers, Agilyx has designed a smaller base system that converts 10 tons of plastic into about 60 barrels of oil per day. The firm is now working with project developers—including Waste Management—to build the first systems. Each will cost $20 million or less, Caesar says.

Waste Management’s most recent biomaterials agreement, signed in August, is with Renmatix, which uses supercritical hydrolysis to convert biomass to cheap sugars. Waste Management wants to see if the start-up’s cellulose-to-sugar process will work with municipal solid waste. “We’re taking some different slivers of waste that we’ve pre- or postprocessed and are working with them to determine if their process would efficiently convert these materials,” Caesar says.

Diversity is a key strength of Waste Management’s start-up strategy, Caesar contends. “If I look across the portfolio, Agilyx is on the cusp of commercialization, while Renmatix is a couple of years away at least. We will want to bring new things into the portfolio as others maybe don’t pan out.” Indeed, in September, Terrabon, a waste-to-crude start-up, filed for bankruptcy. Waste Management was an original backer but did not contribute to an additional round of funding.

For now, Caesar says, landfilling is still the low-cost solution for most of the towns and businesses for which his firm hauls trash. “A lot of customers would like to say they will go zero landfill, but when confronted with the cost, they’re not so adamant about shifting.”

But demand for garbage as feedstock will no doubt rise. Compared with the competition, renewables based on trash have a major upside, Fulcrum’s Kniesche argues. “It limits the feedstock volatility risk that has plagued the biofuels industry in the past. We’re not worried about a drought; our feedstocks will be there because people will keep throwing stuff away.”

Biobased Chemicals
The race is on to repurpose garbage
Sustainability
Should plastics be a source of energy?
Environment
Ethanol from trashy sources advances
Share X
To send an e-mail to multiple recipients, separate e-mail addresses with a comma, semicolon, or both.
Title: Transforming Trash
Author: Melody M. Bomgardner
Chemical & Engineering News will not share your email address with any other person or company.