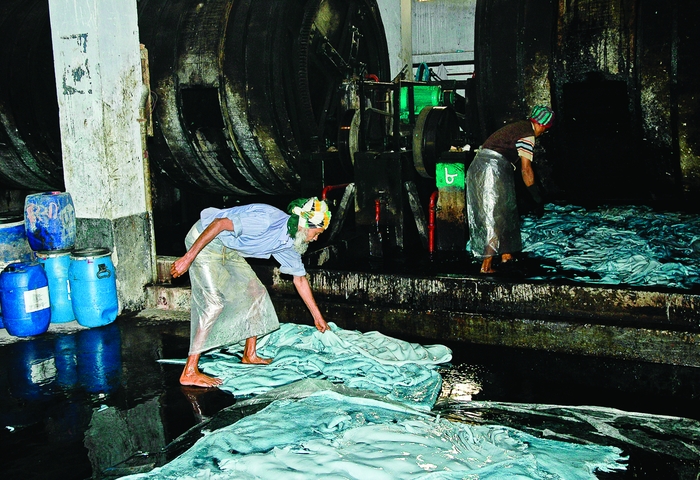 The numerous leather tanneries located in the Hazaribagh district of Dhaka, Bangladesh, have not made any progress in cleaning up their act in recent years, according to a new report by Human Rights Watch.

C&EN visited the tanneries in 2009 and published an article about the dangerous conditions in which workers toil (C&EN, Feb. 2, 2009, page 18). Although relocation to more modern quarters was promised at the time, the HRW report makes clear that leather workers are still in Hazaribagh handling harmful chemicals with their bare hands and that tanneries are still releasing large amounts of untreated liquid waste into the environment.

The report, which is based on information collected during eight weeks of field research earlier this year, claims that Hazaribagh constitutes an “enforcement-free zone” within Dhaka. The tanneries are not inspected by any government official enforcing compliance with either environmental or labor standards, the report says.

The rationale for not inspecting the tanneries is that they are expected to relocate to Savar, a district about 12 miles from Hazaribagh. In Savar, the tanneries would release effluent to a central treatment facility, and environmental and labor laws would presumably be enforced. But no tannery has started to build new facilities in Savar, even though the government’s plan calls for all of them to complete their relocation at the end of 2013, the report states. The delay is caused by tanneries’ demand for compensation from the government for relocating, according to HRW.

About 150 tanneries operate in Hazaribagh, employing a total of some 10,000 people. Almost all of Bangladesh’s leather industry is in the densely populated district, HRW says. In 2012, the tanneries will export roughly $700 million worth of leather goods to countries around the world. The industry’s sales are growing by about $40 million annually, according to the nongovernmental organization.

Workers in the tanneries—many of whom are children—are routinely exposed to azo colorants, chromium, formaldehyde, penta­chlorophenol, sodium sulfide, and sulfuric acid, HRW reports. Workers are often bare-handed and barefooted when handling chemicals. Workers interviewed appeared to be prematurely aged and suffering from a variety of skin conditions, HRW reports. They also said they experienced headaches, dizziness, and nausea.

The tanneries emit more than 5 million gal of untreated effluent every day, according to the report. The effluent is visible in the ditches and gutters of Hazaribagh. HRW researchers found that residents of the leather district suffer from higher rates of illness than do other Dhaka residents with comparable socioeconomic characteristics.

Relocating the tanneries to Savar will not solve all the problems, HRW notes. “A central effluent treatment plant will do nothing to resolve ... poor occupational health and safety conditions, hazardous child labor, and the existing industrial pollution of Hazaribagh,” the report says.

Foreigners can play a role in solving the problems afflicting the Dhaka leather industry, HRW argues. It is calling for companies that import Bangladeshi leather to audit their suppliers to ensure they operate their tanneries in compliance with international standards.

Pollution
Most US states lack sufficient resources to protect public from pollution, report says
Business
Chemical blast kills dozens in China
Environment
China Clamps Down On Lead Emissions
Share X
To send an e-mail to multiple recipients, separate e-mail addresses with a comma, semicolon, or both.
Title: Bangladesh’s Leather Horror
Author: Jean-François Tremblay
Chemical & Engineering News will not share your email address with any other person or company.