[+]Enlarge
Three chemical transformations are completed in a continuous-flow process without the need to isolate intermediates.

Three chemical transformations are completed in a continuous-flow process without the need to isolate intermediates.
[+]Enlarge
Credit: Ulrich Kleiner
Lévesque works at the artemisinin continuous-flow reactor. 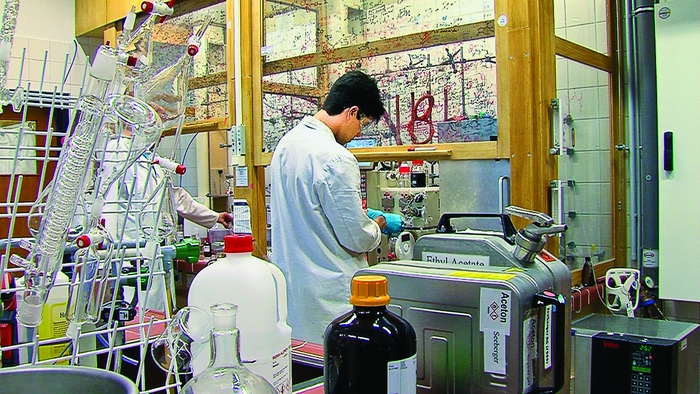 Gaining access to the antimalarial compound artemisinin became potentially easier and less expensive this year when researchers in Germany announced that they developed a continuous-flow semisynthetic procedure for making the drug. Their strategy could be applied to the complex syntheses of other natural products (C&EN, Jan. 23, page 4; Angew. Chem. Int. Ed., DOI: 10.1002/anie.201107446). Artemisinin is currently the most effective treatment in the fight against multi-drug-resistant forms of malaria. Although artemisinin can be extracted from Artemisia annua, the herbaceous plant is seasonal, making the supply unreliable and the cost volatile. By next year, drugmaker Sanofi plans to produce 40 tons of artemisinin via a semisynthetic route based on the intermediate artemisinic acid—a compound that can be produced by a specially engineered yeast. But converting artemisinic acid to artemisinin is no simple task. It involves installing an endoperoxide group and generating three of artemisinin’s rings. Doing this complex chemistry on a scale sufficient to meet the demand of 225 million malaria patients in developing countries presents a formidable challenge. That’s where the work of Peter H. Seeberger and François Lévesque comes in. The researchers, from the Max Planck Institute for Colloids & Interfaces, figured out how to combine three key reactions into a single continuous-flow process that converts dihydroartemisinic acid—made by reducing artemisinic acid—to artemisinin. Since its report in January, Seeberger’s group has optimized the process, upping the yield from 39% to 65%, which allows them to purify the product via crystallization rather than chromatography. The ultimate impact of the continuous-flow process remains to be seen. Sanofi has no plan to adopt it for artemisinin production, but Seeberger has set up a company, ArtemiFlow, in Potsdam, Germany, aimed at making the drug. Seeberger and coworkers are in the process of finishing a reactor that will produce more than 1 metric ton of artemisinin per year, he tells C&EN. The company is also developing a 10-ton reactor.