Materials Data For The Masses 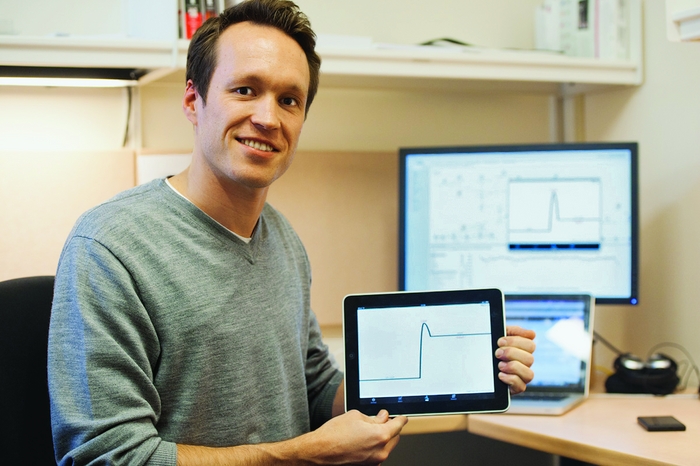 Imagine how productive scientists in a given field could be if vast quantities of reliable data were freely and conveniently available to everyone. That idea—simple to state but challenging to implement—was a cornerstone of the Human Genome Project, which assembled massive databases of genetic information. Similar ideas are now generating quite a buzz in the materials discovery community, especially with the recent introduction of two publicly accessible Web-based tools for exploring computed fundamental properties of materials.

Currently, this type of data sharing is limited. But with proponents from academia, national laboratories, and government bodies calling for accelerated development of a public materials information network, open and convenient access to huge stores of scientific data may soon become the norm in materials research. Advocates say that a development of that type could shave as much as a decade off the processes of discovering new materials and optimizing them for use in energy, electronics, national security, and other areas.

“A lot of computational science is being produced today in various labs and institutions. But it’s all very fragmented,” says Kristin Persson, a research chemist and computational specialist at Lawrence Berkeley National Laboratory. “There is a critical need to assemble all that accumulated knowledge and information in a single place so that it can be searched and used productively, instead of just sitting on a private hard drive until it’s forgotten,” she stresses.

Persson and Gerbrand Ceder, a professor of materials science and engineering at Massachusetts Institute of Technology, have taken initial steps to address that need. The two cofounded the Materials Project, a repository of calculated properties of inorganic materials with a publicly accessible Web-based interface for combing through the data.

The website, materialsproject.org, provides users with a number of tools for using the growing databases. For example, it offers users a phase diagram application to search through thermodynamically stable phases of materials and their decomposition pathways. It also gives users access to a reaction calculator for computing enthalpies of thousands of reactions for comparison with experimental results, a lithium-ion-battery explorer for sifting through properties of candidate battery materials, a structure predictor, and other tools.

The database, which was launched in the fall of 2011, currently contains information on more than 19,000 compounds and has attracted roughly 1,000 users. Although the Web utilities and database do not focus exclusively on Li-ion battery applications, they reflect Ceder’s pioneering and ongoing efforts to use computational procedures to search, design, and screen large numbers of known and as-yet-unsynthesized compounds for use as electrodes and other components of Li-ion batteries.

A similar effort, but with a focus on catalyst discovery, is spearheaded by researchers at Stanford University’s Center for Interface Science & Catalysis. The group, which includes postdoctoral associate Jens S. Hummelshøj and chemical engineering professor original: Jens K. Nørskov, a leading figure in computational catalysis research, just launched CatApp, a freely accessible database and Web application for exploring surface chemistry and heterogeneous catalysis. It appears online at http://suncat.slac.stanford.edu/catapp/ and was described in January in Angewandte Chemie International Edition (DOI: 10.1002/anie.201107947).

The CatApp database includes calculated reaction energies and activation energies for more than 1,000 elementary reactions on numerous single-crystal metal surfaces. For example, the data set includes energies for reactions involving C–C, C–H, C–O, O–O, O–H, N–N, C–N, O–N, and N–H bond splitting for molecules with up to three C, N, or O atoms on the surfaces of a large collection of transition metals. CatApp includes such data for 18 metallic elements with various crystal structures and geometries, such as stepped and nonstepped face-centered cubic and body-centered cubic. Hummelshøj notes that not only can the program run on personal computers, it can even run on smartphones and tablets.

Developers of both database projects say the programs are in their early stages and that expansion plans will soon be put into action. “Our vision is for the Materials Project to become a dynamic Google of material properties,” Persson says. “The plan is for it to continue to grow and change as more users come on board to analyze results, verify against experiments, and increase their knowledge,” she adds.

CatApp is also set to grow. “In the coming weeks, researchers will be able to submit their own data upon publication,” Hummelshøj says. For now, the invitation applies only to results obtained computationally, but future plans call for adding experimental results as well. “We also plan to add oxides, carbides, nitrides, sulfides, alloys, and nanoparticles,” Hummelshøj says.

CATALYSIS ON THE GO
[+]Enlarge
Credit: Jens S. Hummelshøj/Stanford U
Details of catalytic reactions, such as methanol decomposition on copper (shown in this iPhone display), can be accessed via CatApp from mobile devices. 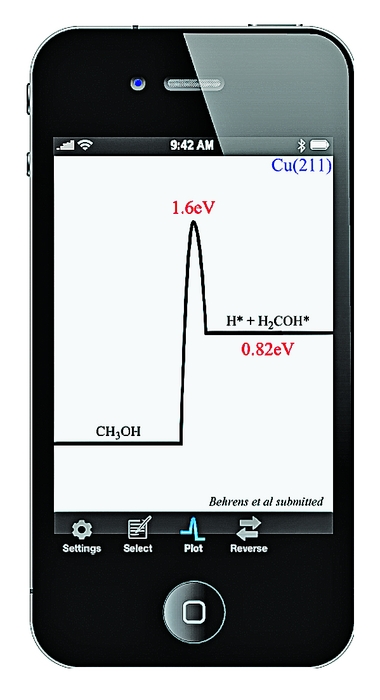 Credit: Jens S. Hummelshøj/Stanford U
Details of catalytic reactions, such as methanol decomposition on copper (shown in this iPhone display), can be accessed via CatApp from mobile devices.

One point underscored by the development of these databases is that today’s computational methods for materials discovery are powerful. “As a result of tremendous increases in computing power, first-principle methods have reached a stage where they can be used to reliably determine how a material’s structure and the interface it forms with its environment control its properties and reactivity,” says the University of Virginia’s Matthew Neurock, a chemical engineering professor and expert in computational methods. Neurock adds that this information can be used to develop structure-property-reactivity relationships that can be exploited in the discovery of new materials for catalysis, batteries, supercapacitors, photovoltaics, thermoelectrics, and fuel cells. Regardless of application, Nørskov stresses, “the most valuable feature of today’s computational methods is that they allow us to discover trends and variations from one system to the next.”

Many promising novel materials have been discovered computationally. Some recent examples include the discovery by Nørskov’s group of molybdenum sulfides that could serve as low-cost alternatives to platinum electrocatalysts for generating hydrogen from water (Nat. Mater., DOI: 10.1038/nmat3008). Another example is a family of previously unexplored carbonophosphates and carbonosilicates that Ceder’s group is studying computationally and experimentally for use as high-performance cathode materials for Li-ion batteries (J. Mater. Chem., DOI: 10.1039/c1jm12216a).

And in optoelectronics, Alex Zunger of the University of Colorado, Boulder, and coworkers searched through “an astronomical” number of silicon-germanium structural variations and found that SiGe2Si2Ge2Si (subscripts denote the number of monolayers) grown on a silicon-germanium alloy and topped with a germanium layer should be 50 times as efficient at absorbing light as existing Si–Ge superlattices are (Phys. Rev. Lett., DOI: 10.1103/PhysRevLett.108.027401). The team notes that in principle, the unusual material could be prepared via molecular beam epitaxy.

The power of computations in materials research was highlighted this past summer by President Barack Obama when he announced the launch of the Materials Genome Initiative, a $100 million materials research program. The multipronged program is a platform for developing a so-called materials innovation infrastructure to be built upon a foundation of advanced computational techniques, experimental tools, and ready access to digital data.

“Currently, there is no infrastructure that allows scientists and engineers to pursue this integrated vision and share information,” says Cyrus Wadia, an assistant director in the White House Office of Science & Technology Policy. Historically, a gap of 10 to 20 years has occurred from the time a novel material is discovered until it is used in manufacturing of advanced commercial products, Wadia notes. One of the principal goals of the new initiative, Wadia explains, is to drive materials discovery and development at twice the pace and half the cost.

With computational tools and digital data becoming ever more accessible, the role of computers in materials research can only increase, Nørskov says: “We are witnessing the beginning of a new approach to materials discovery.”