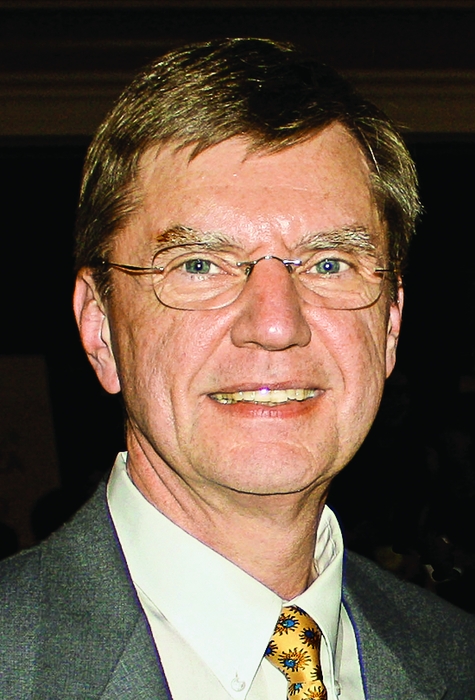 The sight of spacecraft piercing the sky inspired a generation. Some, like Michael R. Wasielewski, were not content to sit in idle wonder—they had to know how it was done. Wasielewski’s curiosity about the processes that drive rocket propulsion attracted him to the field of chemistry.

After completing his Ph.D. in 1975 with Leon M. Stock at the University of Chicago, Wasielewski did postdoctoral research with Ronald Breslow at Columbia University, where he became interested in the use of biomimetic methods to explore the chemistry of photosynthetic systems.

Today, as the Clare Hamilton Hall Professor of Chemistry at Northwestern University, Wasielewski leads a lab that is at the cutting edge of artificial-photosynthesis research. His group uses ultrafast transient absorption spectroscopy, time-resolved electron paramagnetic resonance spectroscopy, and synchrotron-based X‑ray scattering, among other techniques, to characterize the behavior of photogenerated electrons in organic systems. Wasielewski is also director of the Department of Energy-sponsored Argonne-Northwestern Solar Energy Research Center (ANSER). He also holds an appointment at Argonne as a senior scientist at the Center for Nanoscale Materials.

In addition to carrying out mechanistic studies of photosynthesis, Wasielew­ski’s team is also developing new materials with potential applications in solar energy production. Early results suggest that the materials might exhibit “singlet fission.” In this process, the absorption of a photon produces two electron-hole pairs instead of the single pair normally produced. This enhancement could increase the maximum theoretical efficiency of solar cells made from the materials by as much as 30%.

Wasielewski’s lab is also investigating quantum effects in organic materials with an eye toward quantum computing. His group is exploring a phenomenon known as “spin teleportation,” wherein the quantum state of a molecule at one location can be replicated at another location. With his organic materials, he says, his team is close to accomplishing this feat with light and to read the teleported states using microwave pulse sequences. The use of organic materials offers the potential to “deploy the arsenal of organic chemistry, including the tools of self-assembly,” to make materials for massively parallel computational systems, he says.

Wasielewski was elected as a fellow of the American Association for the Advancement of Science in 1995. His recent honors include the 2004 Inter-American Photochemical Society Award in Photochemistry, the 2006 James Flack Norris Award in Physical Organic Chemistry from ACS, and the 2008 Porter Medal.

When asked to sum up his work, Wasielewski says, “The magic word is multidisciplinary.” His research demands expertise in organic, physical, inorganic, and materials chemistry, as well as instrumentation. Jovan Giaimuccio, a former group member now at Independent Project Analysis, says, “The opportunity to be exposed to so many advanced forms of scientific experimentation gives Mike’s students the ability to discern scientific discovery from experimental artifact.”