On The Origin Of Sugars

Prebiotic Chemistry: Experiments reveal a possible path to forming the sugar in RNA

Startin’ Somethin’
[+]Enlarge
Credit: Ram Krishnamurthy
Dihydroxyfumarate reacts with simple aldehydes to make molecules that could have formed the basis for life. 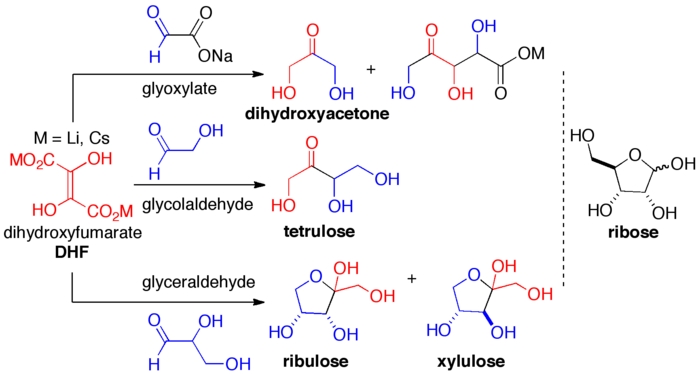 Credit: Ram Krishnamurthy
Dihydroxyfumarate reacts with simple aldehydes to make molecules that could have formed the basis for life.

New experiments strengthen a theory about how sugars could have formed on early Earth (J. Am. Chem. Soc., DOI: 10.1021/ja211383c). This set of reactions could help uncover the nucleic acid predecessor to RNA, scientists say.

The sugar ribose forms the backbone of RNA, the coworker--and nucleic acid ancestor--of DNA. Scientists trying to imagine how life arose from chemicals on Earth have looked to the formose reaction to build the sugar portion of RNA from formaldehyde. This reaction creates a mixture of sugars with varying sizes and shapes, of which ribose makes up less than 1%. So chemists have experimented with different likely prebiotic conditions to control the reaction and build more ribose.

In 2007, Albert Eschenmoser, now retired from Scripps Research Institute in California, proposed a different set of reactions to build sugars in a prebiotic world, starting with the two-carbon molecule glyoxylate and its dimer dihydroxyfumarate (DHF) (Tetrahedron, DOI: 10.1016/j.tet.2007.10.012). Intermediates could also lead to other biological building blocks like α-amino acids and pyrimidines.

Now Ram Krishnamurthy and his colleagues at Scripps Research Institute have tested whether some of these reactions produce the predicted sugars. The researchers reacted the dilithium salt of DHF with simple aldehydes like glyoxylate, glycolaldehyde, and glyceraldehyde. The reaction with glyceraldehyde produced a mixture of the five-carbon sugars xylulose and ribulose with 60% yield. The researchers also detected intermediates by 13C NMR that could lead to α-amino acids in other reactions.

“We were surprised at how clean and efficient the reactions were,” Krishnamurthy says. The DHF reactions gave few side products, he explains, and left little starting material behind. The researchers are now testing the reactions under plausible prebiotic conditions, such as using different DHF salts at low temperatures and concentrations. But for Eschenmoser’s “glyoxylate scenario” to be a possible route to the first sugars, a large challenge remains: Scientists have never built the starting material DHF under conditions that mimic those on early Earth.

Nonetheless, building ribulose so cleanly is significant, says George Cody, an organic geochemist at the Carnegie Institution for Science. Prebiotic conditions may have existed that transformed ribulose to ribose without the enzymes that do that job in our bodies today, he notes, although the reactions are still unknown.

If researchers find a plausible way to make DHF, Eschenmoser’s scenario could provide clues to which nucleic acid preceded RNA, he says. Because these reactions form ribulose so efficiently, that sugar–and not ribose–may have been one of the earliest sugars, Hud says. “When I look at ribose, it seems like a product of evolution,” he adds. “It’s hard to make under prebiotic conditions, and it’s perfect for what it does today.”

Origins Of Life
How the first nucleotides might have formed on Earth
Biological Chemistry
Comet collisions may have helped seed life on Earth, lab experiment shows
Synthesis
A Possible Explanation For The Origins Of Peptides On Earth
Share X
To send an e-mail to multiple recipients, separate e-mail addresses with a comma, semicolon, or both.
Title: On The Origin Of Sugars
Author: Melissae Fellet
Chemical & Engineering News will not share your email address with any other person or company.