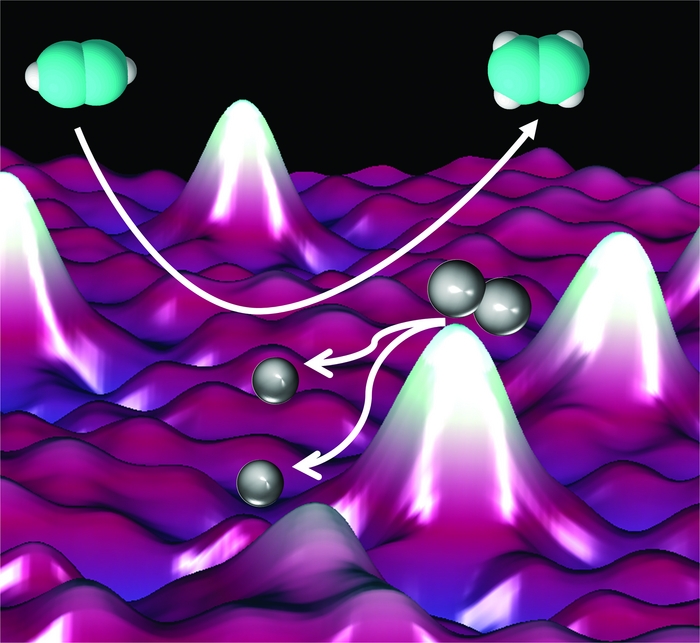 Copper nanoparticles dotted with a few isolated palladium atoms can serve as effective catalysts for hydrogenating organic compounds, according to a study conducted at Tufts University (Science, DOI: 10.1126/science.1215864). The work may lead to reformulated catalysts with reduced quantities of rare and costly metals for large-scale industrial processes.

The study also suggests strategies for boosting the catalytic activity of abundant and relatively inert metals by tuning their electronic properties.

Several manufacturing areas depend critically on hydrogenation chemistry, which is often mediated by catalysts containing particles of platinum, palladium, and other expensive metals. In the food industry, for example, hydrogenation is used to stabilize fats by reducing the unsaturation in fatty acids containing multiple carbon-carbon double bonds. Hydrogenation is also central to petrochemical processing and pharmaceutical production.

Researchers continue to look for ways to reduce the quantities of precious metals needed to make active hydrogenation catalysts. Achieving that goal is challenging because it requires finding catalysts that bind reactants tightly enough to activate them without permanently immobilizing them, but that bind intermediates weakly enough to allow them to form products.

The Tufts team, which includes Georgios Kyriakou, E. Charles H. Sykes, and coworkers, finds that for hydrogenations, isolated Pd atoms on copper strike that delicate balance. On the basis of scanning tunneling microscopy and other analytical methods, the team reports that the “uncommon energetic landscape” of their system causes H2 molecules to bind and dissociate at single-Pd-atom sites, forming H atoms that “spill over” onto regions of bare copper, which normally is inert to H2. Those regions bind H atoms weakly, leaving them mobile enough to selectively hydrogenate two test compounds—acetylene and styrene, which are converted to ethylene and ethylbenzene, respectively.

This study shows that minuscule amounts of a reactive metal in a sea of less reactive metal can make a tremendous difference in the reactivity of the latter, says the University of Wisconsin, Madison’s Manos Mavrikakis, a catalysis specialist. He adds that this “important” work provides an atomic-scale view of the way dopants can promote hydrogenation, which has not been well understood.

Comments
Catalysis Fan (March 10, 2012 10:25 PM)
Not worth much and don't know why Science publishes this kind of thing. It is neither useful nor does it tell us anything about catalysis.
Reply »

K.Lakshmipathi (April 1, 2012 2:28 AM)
If it is applicable in Pharma industries,
I am really happy. Rate of reaction clearly not mentioned.