Endometriosis Link?
[+]Enlarge
Credit: Shutterstock
Researchers found that one compound in sunscreens was associated with an elevated risk of endometriosis. 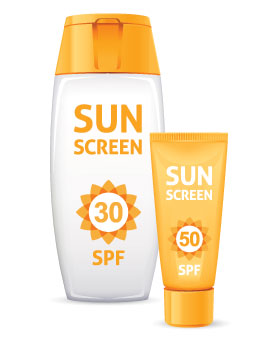 Credit: Shutterstock
Researchers found that one compound in sunscreens was associated with an elevated risk of endometriosis.

Although sunscreens shield the skin from harmful ultraviolet light, they may have a dark side: Exposure to a compound commonly found in the lotions was associated with endometriosis in a small study in people (Environ. Sci. Technol., DOI: 10.1021/es204415a).

In endometriosis, the lining of the uterus starts to grow into other tissues, often causing pain and infertility. The condition is difficult to diagnose, but it affects approximately 11% of reproductive-age women in the U.S. and a large proportion of infertile women, according to Warren Foster, a reproductive biologist at McMaster University in Hamilton, Ontario, who was not involved in the study.

Scientists have connected the condition to the hormone estrogen. Endometriotic lesions grow and shrink with the body’s fluctuating levels of estrogen. And animal studies have found associations between the condition and compounds such as the environmental contaminants dioxins and polychlorinated biphenyls, which mimic estrogen’s effects. “But the real challenge is to go from experimental animal evidence to definitive human studies,” says Germaine Buck Louis, a reproductive epidemiologist at the National Institutes of Health.

So Buck Louis and her colleagues decided to investigate endometriosis in people in connection with a range of endocrine-disrupting compounds, including the benzophenone-containing compounds in sunscreens called UV filters. Although no previous evidence tied sunscreens to endometriosis, the scientists knew that some benzophenones mimic estrogen signalling, says Kurunthachalam Kannan, an analytical chemist with the New York State Department of Health, and an author of the study.

The scientists collected urine samples from 625 women in Salt Lake City and San Francisco. There were two groups of women. One group of 494 women had sought medical care to schedule surgery to diagnose endometriosis. “Because not all women with endometriosis have symptoms, women seeking care are just a portion of affected women,” says Buck Louis. So the other group were women who matched the ages and areas of residence of the first group, but had not sought care for endometriosis. Doctors gave this second group of women a pelvic magnetic resonance imaging scan to detect signs of the condition.

Before diagnosis, the researchers measured the women’s urine concentrations of five benzophenone sunscreen agents using liquid chromatography-tandem mass spectrometry. After diagnosis, the team compared the frequency of endometriosis of women in the surgery group to those women’s benzophenone concentrations. Women in the top 25% of concentrations of one sunscreen agent, 2,4-dihydroxybenzophenone, had a significantly greater rate of endometriosis than did those in the bottom 75%. The researchers say that due to the small size of the study, the exact increase in risk is unclear. In the MRI group, although the scans could only detect advanced stages of endometriosis, the scientists found a similar trend with the compound. They didn’t find a connection between the condition and any of the other four compounds.

Sonya Lunder, a senior analyst at the Environmental Working Group, an advocacy organization, calls the study “interesting and compelling” because it raises concerns about common compounds. “Benzophenones are also added to plastics and cleaning products for UV protection,” she says.

But McMaster’s Foster points out that these associations do not imply that the compound causes endometriosis. So, he adds, without further studies, “People should definitely not throw out their sunscreens.”

Comments
Hillary Peterson (March 22, 2012 11:50 AM)
This is very interesting and confirms that consumers should proceed with caution when using sunscreens made with chemical UV filters. It is important to note, that regardless of what further studies reveal, there is a safe and effective alternative that provides broad spectrum UVA/UVB protection: sunscreens made with non nano zinc oxide.

Susan Beem (March 26, 2012 3:32 PM)
However, nano particles are now also known to easily enter the body. Wheat do we know about the effects of nano zinc on our physiologic systems. We perhaps should use zinc oxide in its opaque form, depending on what is used as binder. Or start buying long sleeved shirts instead of sports bras and camisoles, broad hats and wide parasols.
Reply »

Ann Gugler (March 24, 2012 6:37 PM)
I have a condition known as Multiple Chemical Sensitivity which leaves me hypersensitive to chemicals. On some of my walks in the outback (Australia), the leader has told people to put on sunscreen and wear a hat. Even though I stand back from the wearers and remain upwind I am severely affected and even find it hard to walk.
Reply »

Dianne Woodhouse (October 10, 2015 6:20 AM)
Hi Ann, my daughter and I live in Australia, and like you we both have multiple chemical sensitivity. Our MCS was directly caused by the common sunscreen chemical butyl methoxydibenzoylmethane, known overseas as avobenzone or sometimes as Parsol 1789. Like you we would have difficulty walking if upwind and at a distance from someone wearing sunscreen with this particular chemical. In the last few years manufacturers of perfume and cologne have started adding the same set of sunscreen chemicals, including this one, to their products, so that most mass-marketed synthetic perfumes and colognes contain butyl methoxydibenzoylmethane. We're looking for other people whose MCS is a result of direct use or indirect exposure to this chemical,
Reply »

Lyn Joy (March 25, 2012 11:59 AM)
Eating a lot of vegetables and fruit also creates natural protection from burning. Add proper clothing and a hat.

I am 55. I eat well. I am of European descent. I cover the back of my neck (the only place I still burn). I garden in the sun for hours. I do not burn. I do not use sunscreen.
Reply »

David C. Steinberg, FRAPS (March 30, 2012 7:58 AM)
2,4-dihydroxybenzophenone is not used in sunscreens for human use anywhere in the world. How about getting your facts correct.
Reply »

Bud Gillan (April 20, 2012 11:21 AM)
BP2 and 2,4-dihydroxybenzophenone are not ingredients in chemical UV filters. They are the derivatives and breakdown products that result from using these sunscreens.