Supple And See-Through
[+]Enlarge
Credit: ACS Nano
A researcher bends a graphene-polyvinylidene-fluoride film deposited on clear plastic. The films (inset) could be a low-cost substitute for the transparent indium tin oxide electrodes used in organic light-emitting diodes and displays. 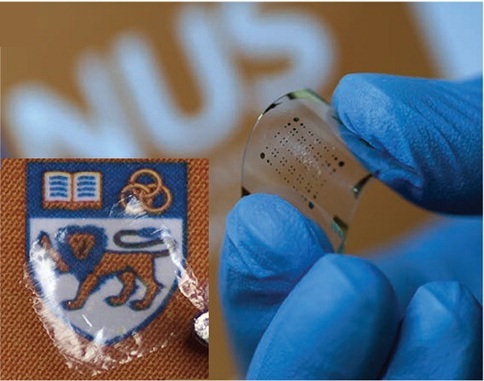 Credit: ACS Nano
A researcher bends a graphene-polyvinylidene-fluoride film deposited on clear plastic. The films (inset) could be a low-cost substitute for the transparent indium tin oxide electrodes used in organic light-emitting diodes and displays.

By laminating graphene with a fluoropolymer layer, researchers have made flexible, transparent, and highly conductive films (ACS Nano, DOI: 10.1021/nn3010137). The films could find use as the transparent electrodes needed in organic light-emitting diodes, solar cells, and displays, the researchers say.

Currently, electronics manufacturers use indium tin oxide (ITO) to make transparent electrodes. Because this material is expensive, researchers have thought that graphene, a transparent and electrically conductive single layer of carbon atoms, could be a lower-cost alternative. Graphene is also stronger and more flexible than ITO, and thus could enable foldable displays and solar panels.

Unfortunately, the performance of graphene sheets has not matched that of ITO films, which are more than 90% transparent with a resistance less than 100 ohms. Graphene sheets are about 97% transparent, but have a resistance greater than 500 ohms. Researchers can increase graphene’s conductance by doping it with nitric acid. But the acid leaks out, damaging surrounding electronics and making the doping effect temporary. Using this doping method, graphene can “reach resistances as low as about 150 ohms for a few hours,” says Barbaros Özyilmaz of the National University of Singapore.

Özyilmaz worked with researchers at Sungkyunkwan University in Suwon, South Korea to develop a simple, more permanent strategy for boosting graphene’s conductance. The researchers coat graphene with polyvinylidene fluoride, a polymer that is ferroelectric, which means it has a permanent electric field. Films of the polymer have a layer of paired opposite charges on their surface. When these charges come in contact with graphene, they donate electrons to and grab electrons from the carbon layer, increasing its conductance. Compared to acid doping, though, this electrostatic doping lasts indefinitely and does not damage the material, says Özyilmaz. Also the polymer is a commonly-used scratch-resistant material. “We can in one process step make graphene very conducting and provide a protective coating,” he says.

To make the conducting materials, the researchers first grow graphene on a copper foil using chemical vapor deposition. Then they create a thin, uniform polymer film by placing a solution of it on top of the graphene while rotating the sheet at high speed. Finally, they etch away the copper and transfer the graphene-polymer film to a plastic substrate.

The resulting conductors are more than 96% transparent and have a resistance of 120 ohms. Özyilmaz says his team is working to improve the conductance. But, he adds, “even if we never beat ITO,” the flexibility of the material could lead to new applications.

The new advance is “a big deal,” says James Tour, a professor of chemistry at Rice University. “To have a sheet resistance that low in a stable and flexible film is really good.” Tour’s group has reduced the resistance of graphene by depositing it on an underlying metal grid. While the resulting material has 60-ohm resistance, its production method is cumbersome, he says. The fabrication process for Özyilmaz’s material is much simpler, he adds. “What is shown here is ITO competitive, yet good for flexibility,” Tour says.