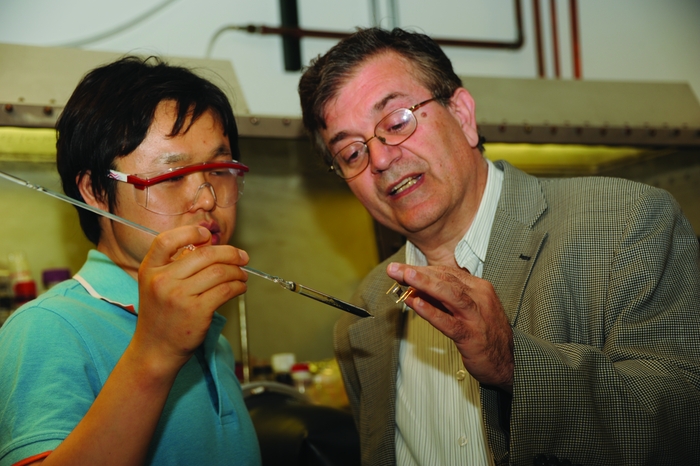 By replacing the liquid component of a class of thin-film solar cells with a solid, researchers at Northwestern University have come up with a design that avoids the corrosion and durability problems associated with the liquid variety. The study, reported in a paper in Nature (DOI: 10.1038/nature11067), may lead to new types of inexpensive, long-lasting, and high-performing solar cells composed entirely of solid-state components. 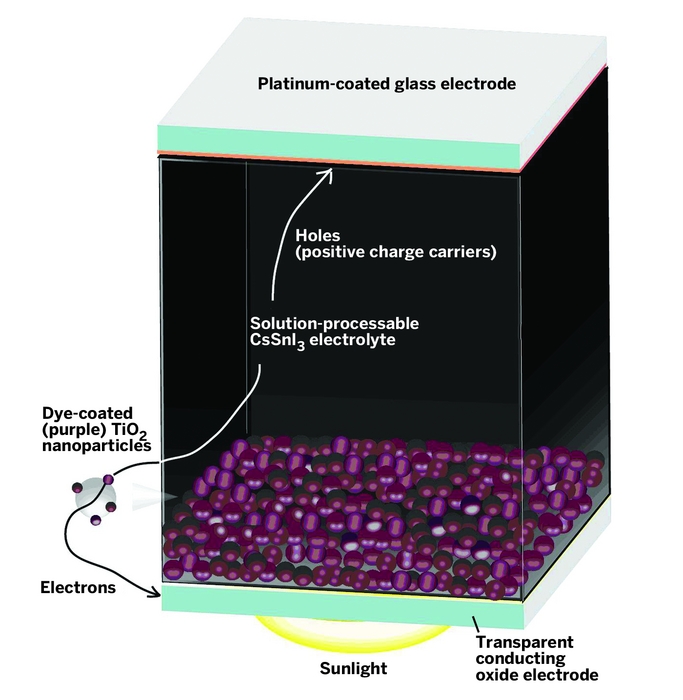 Photovoltaic, or solar-cell, technology holds enormous promise for tapping usable, carbon-free energy from the sun. Some three-quarters of electricity-producing rooftop photovoltaic panels and other types of solar arrays are based on crystalline silicon cells, a well-established but expensive technology.

Dye-sensitized solar cells (DSSCs) are one low-cost alternative to crystalline semiconductor photovoltaics. The heart of DSSCs consists of a film of inexpensive porous titanium dioxide nanoparticles coated with a sunlight-absorbing dye, often a ruthenium compound, in contact with a liquid electrolyte.

The most common electrolyte is an organic solution of the iodide/triodide (I–/I3–) redox couple. This material conducts positive charge (or “holes”) and plays a central role in shuttling charge through the cell.

DSSCs are made from inexpensive components and can be fabricated via low-cost manufacturing processes. But their long-term stability and durability is limited by several factors: The electrolyte solution is corrosive, volatile, and prone to leaking, and it can react with the dye and other cell components.

Researchers have shown previously that the liquid electrolyte can be replaced with a noncorrosive solid-state counterpart. Until now, however, the efficiency of solid-state cells in converting sunlight to electricity has been low.

Northwestern chemistry professor Mercouri Kanatzidis and postdoc In Chung have come up with a replacement material for DSSCs that sidesteps the cells’ problems. Specifically, the group, which includes Robert P. H. Chang, Byunghong Lee, and Jiaqing He, has shown that substituting the liquid electrolyte with a new semiconducting inorganic solid—fluorine-doped cesium tin iodide (CsSnI2.95F0.05)—avoids the corrosion and reactivity problems and leads to cells with conversion efficiencies of around 10%. That value is comparable to the efficiencies obtained with newly fabricated DSSCs. They also found that the new cells stand up well to high temperatures, high levels of humidity, and accelerated ageing tests.

Kanatzidis points out that unlike conventional solar-cell electrolytes, CsSnI3 absorbs light strongly and causes the new cells to absorb more of the red portion of the visible spectrum than that captured by traditional DSSCs. That property, which may play an important role in the new cell’s high performance, is not yet understood and is the focus of follow-up studies, he says.

The performance of the new cells is encouraging, says chemistry professor Thomas E. Mallouk of Pennsylvania State University. Mallouk, who wrote a commentary for the same issue of Nature, adds that not only does the cell have low internal electrical resistance, which is to be expected for cells that have good hole conductors, but it also achieves high current and voltage.

Given that a range of solid solutions can be made from compounds in this family, “elaborating the chemistry of this class of hole conductors may be a fruitful avenue for dye-cell research,” he adds.

Comments
Elia Saba (February 10, 2013 8:12 PM)
If the cell can transfer infrared energy, it should be closer to 100% and should produce electricity at night. 10-15% efficiency is very low considering the complicated process of construction. The ultimate solar cell should be simple to manufacture. Two or three painted layers that when dry form the efficient solar cell with efficiency of about 70% at least.

Regardless, the above discovery is a great achievement.