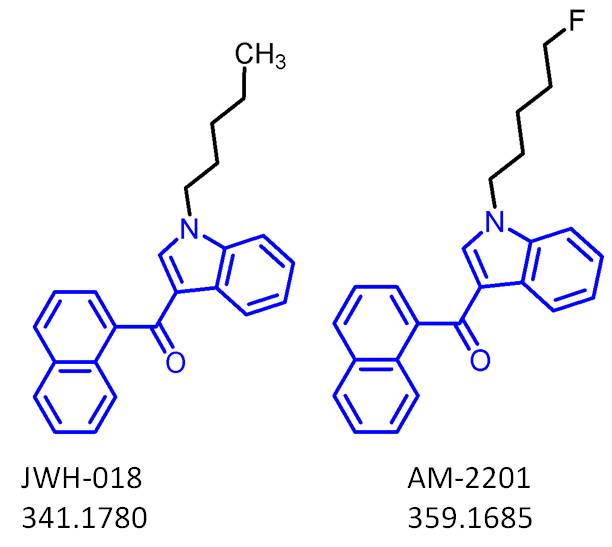 “Herbal incense” products sold in gas stations and on the internet are typically spiked with synthetic cannabinoids, a class of designer drugs, says Megan Grabenauer of RTI International. When smoked, these compounds produce a high just as their chemical forebear, tetrahydrocannabinol, better known as THC, does. The Drug Enforcement Agency has banned some synthetic cannabinoids, such as JWH-018. But the scientific literature contains recipes for hundreds of synthetic cannabinoids with different, yet related chemical structures. Every time a new test catches one, designer-drug makers can just move on to the next.

To develop a more-general detection method, Grabenauer borrowed a technique from metabolomics called mass defect filtering, which identifies related compounds. The mass defect, or fractional mass, is the part of a substance’s molecular weight that lies to the right of the decimal point. When chemists alter a core structure by adding or subtracting functional groups, the number on the left of the decimal can change quite a bit, but the fractional mass changes little, says Grabenauer.

The researchers tested the method on 32 locally purchased herbal mixtures with names like “Mr. Nice Guy” and “Hot Hawaiian.” After subjecting the herbs to ethanol extraction, they performed liquid chromatography/mass spectrometry on the samples. Knowing JWH-018’s fractional mass to be 0.18 dalton, the researchers checked their spectra for compounds with fractional masses between 0.13 and 0.23 Da. Based on previous mass spectrometry data, they thought this range of fractional masses would catch most related synthetic cannabinoids. Every herbal incense variety that they tested contained compounds in this range, indicating the potential presence of synthetic cannabinoids.

To get a structural picture of the suspected cannabinoids, the researchers then fragmented the compounds using collision-induced dissociation, a mass-spectrometric method, and compared the resulting fragments to those of JWH-018 and other synthetic-cannabinoid standards. From these mass spectrometry data, the researchers identified at least one synthetic cannabinoid in each herbal mixture; some contained multiple drugs. All told, the researchers found nine cannabinoid compounds in the herbal products. In addition to JWH-018, they found one other illegal compound and seven that are not regulated.

“They are looking at a very important problem,” says Gary Siuzdak of Scripps Research Institute, in La Jolla, Calif. “Their approach is quite solid.” The research is timely, too. “Many drugs of abuse in the Olympics are designer drugs,” he says, in the steroid family. Grabenauer plans to extend her method to other designer drug families.

Comments
sober (June 20, 2012 8:16 AM)
There is much easier solution - legalize drugs and takeover the control from cartels. Or legalize at least marijuana, which is well know and safe, much safer than legal alcohol.
Reply »

Patrick Sweetman (June 25, 2012 10:06 PM)
I don't know. That would put a lot of people out of a job. People on either side of the thin blue line. On the other hand the increased tax take and the reduced burden of enforcement are no-brainers.
Reply »