Nanopatterns
[+]Enlarge
Credit: Nano Lett.
Atomic force micrographs show semiconductor nanocrystal films produced by a new lithography technique. The width of the lines in the “M” is 1 µm; the lines in the hatched pattern are 370 nm wide; and the dots are 240 nm wide. The color scales in each image reflect the height of the structures. 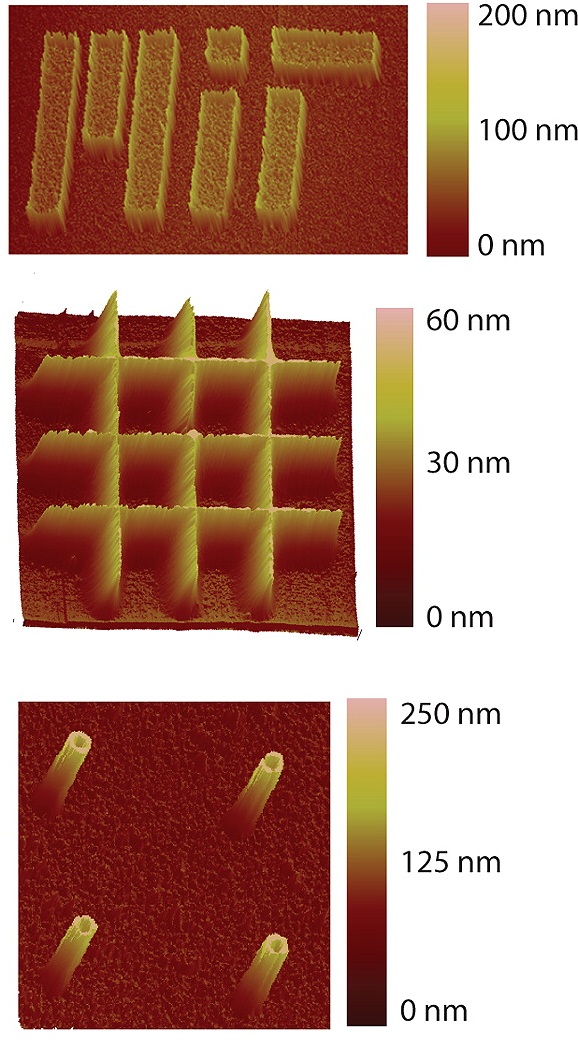 Credit: Nano Lett.
Atomic force micrographs show semiconductor nanocrystal films produced by a new lithography technique. The width of the lines in the “M” is 1 µm; the lines in the hatched pattern are 370 nm wide; and the dots are 240 nm wide. The color scales in each image reflect the height of the structures.

To build optoelectronic circuits, researchers need to make films of semiconductor nanocrystals in desired patterns, just as they can with conventional silicon-based electronics. But the techniques researchers have tried in the past have either produced films with cracks, offered little control, or been compatible with only certain materials. Now researchers have adapted a common technique for patterning conventional circuits to make crack-free films of semiconductor nanocrystals with nanoscale precision (Nano Lett., DOI: 10.1021/nl3022863).

Optoelectronic devices, such as light-emitting diodes, convert signals between light and electrical current. Scientists consider semiconductor nanocrystals, or quantum dots, ideal materials for such devices because of their unique electronic properties. But scientists lack a simple means of producing electrically conductive, nanoscale patterns of the materials, which could enable light-based circuits or nano-LED displays.

Marc Kastner’s group at Massachusetts Institute of Technology had a lot of experience with making patterns of bulk inorganic materials on silicon circuitry using electron beam lithography. The researchers knew lithography could produce nanoscale patterns with great precision, so they decided to see if they could do the same with semiconductor nanocrystals instead.

In the new technique, the researchers first deposit a polymer onto a silicon dioxide substrate. Using an electron beam, they next etch a nanoscale pattern into the polymer. Then they drop a solution of their nanocrystal of choice onto the surface, the nanocrystals filling the trenches etched into the silica. After letting the crystals dry, the researchers dip the substrate in acetone to dissolve the polymer, leaving behind a nanocrystal pattern.

Although the basics of the method are well-established for circuit printing, Kastner and postdoctoral researcher Tamar Mentzel weren’t sure that it would work with nanocrystals. Nanocrystals are coated with organic molecules left over from their synthesis. Other scientists thought that the acetone might pull off the organic molecules coating the nanocrystals, ruining the structural integrity of the film. Fortunately, Mentzel says, “When the nanocrystal film dries, it’s structurally robust. The solvent doesn’t penetrate into the film and destroy it in any way.”

Some scientists also worried that the nanocrystals might stick to the polymer, making it hard to produce a clean pattern. But the MIT team found that sonicating the substrate while dissolving the polymer produced a clean pattern.

The smallest structure the researchers could make was about 30 nm in width. They found that the technique worked with nanocrystals made of PbS, PbSe, or CdSe, as well as with ones with a ZnCdSe core and a ZnCdS shell.

The resulting films were free of the clusters and cracks that could interfere with charge transport through a device. The team found that the crack-free PbS film’s conductivity was 180 times greater than in films made with a different technique.

Douglas Natelson, a condensed matter physicist at Rice University, applauds the success of the technique. “They’ve been able to put down thin, uniform-looking films” with interesting patterns, he says. “It all sounds very simple, but actually getting it to work is quite impressive.”