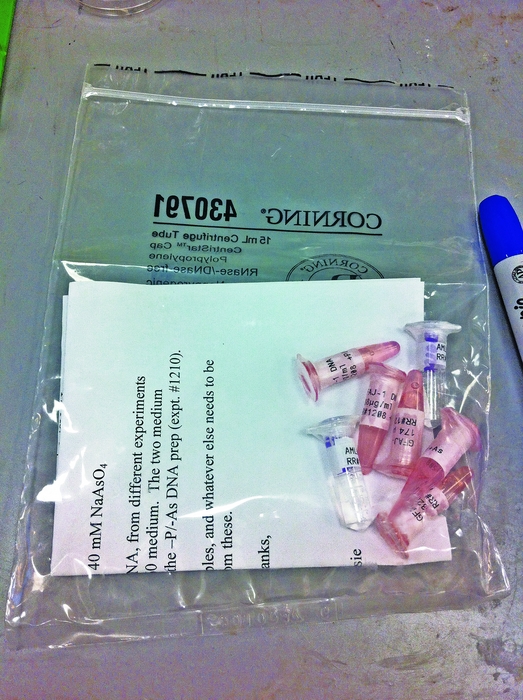 Credit: Courtesy of Marshall Reaves
Redfield sent these GFAJ-1 samples to her collaborators.

The periodic table of life is holding firm. A year and a half after a study made the controversial claim that a bacterium could weave arsenic into its biomolecules—thereby expanding the chemical definition of life—publications from two independent teams now refute that claim (Science, DOI: 10.1126/science.1218455 and 10.1126/science.1219861). 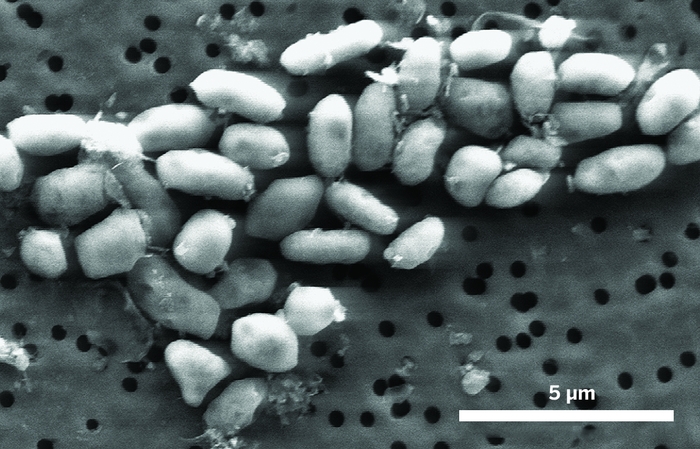 The new data indicate that the infamous microbe, known as GFAJ-1, does not incorporate arsenic into its metabolites or DNA when grown in ultrahigh concentrations of arsenic. The work also suggests that contamination could explain some of the conclusions drawn in the original report.

The new results “provide good evidence that GFAJ-1 does not appear to ‘rewrite the textbooks,’ ” says bioorganic chemist Kent S. Gates of the University of Missouri, who wasn’t involved with any of the studies. “The claims deserved to be tested, and a number of scientists stepped up to do the job.”

Every life form on Earth uses hydrogen, carbon, nitrogen, oxygen, phosphorus, and sulfur. A team led by Felisa Wolfe-Simon made a major splash in 2010, however, after reporting in the journal Science that GFAJ-1, which they’d scooped out of California’s arsenic-rich Mono Lake, survived by using arsenic in place of phosphorus (DOI: 10.1126/science.1197258; C&EN, Dec. 6, 2010, page 36).

Wolfe-Simon’s original work, funded by NASA, was the subject of a major press conference and generated front-page headlines. Then sparked a vociferous backlash from scientists and journalists in print and online (C&EN, Dec. 13, 2010, page 7). In 2011, when Science published the paper in print, it was accompanied by eight critiques (C&EN, June 6, 2011, page 7).

One of the two new studies was conducted by an outspoken critic of the original report, microbiologist Rosemary J. Redfield of the University of British Columbia, along with genomics professor Leonid Kruglyak of Princeton and coworkers. They determined that adding arsenic to phosphorus-starved GFAJ-1 doesn’t help the microbe grow. When they purified DNA from GFAJ-1, it didn’t fall apart in water, as would be expected if its backbone contained arsenic. Using liquid chromatography-mass spectrometry, the team verified that the DNA had no covalently bound arsenic. Their experiments and conclusions have been public for some time, but this marks the debut of that work in a peer-reviewed journal. Redfield published regular updates and results on her blog and published the manuscript the team submitted to Science to arXiv, a repository for preprints of research papers. “It’s great that there are now two studies that use different methodologies that agree on the major points,” Kruglyak says.

The other study, from microbial physiologists Julia A. Vorholt and Tobias J. Erb and colleagues at ETH Zurich, used inductively coupled plasma mass spectrometry and ultrapure reagents to demonstrate that phosphorus-starved GFAJ-1 scavenges trace amounts of phosphorus from its culture medium to survive. When depleted of phosphorus, no GFAJ-1 grew, even with added arsenic. More tests confirmed the absence of arsenic in DNA and metabolites. The ETH team detected some arsenic-containing sugars in GFAJ-1 extracts, but these same sugars also form in control experiments with no bacteria, suggesting they form spontaneously. Contamination from this spontaneous arsenic-sugar formation could explain some of Wolfe-Simon’s observations, Vorholt says.

“The new research shows that GFAJ-1 does not break the long-held rules of life, contrary to how Wolfe-Simon had interpreted her group’s data,” the journal Science says in an editorial statement. “The scientific process is a naturally self-correcting one.”

The scientific process “is ‘self-correcting’ in the sense that individual scientists work to correct the errors made by other scientists,” Redfield says. “Researchers who have published erroneous work sometimes say that they are happy that their work has stimulated further research, when they should be apologizing for having created the circumstances that necessitated the additional work.”

The new work’s authors “are convinced they have tightly shut the door on arsenic incorporation into biomolecules,” Wolfe-Simon, now at Lawrence Berkeley National Laboratory, wrote in an e-mail. “We respect the Science editors and authors of the current papers, but think low amounts of arsenic incorporation may be challenging to find and unstable once cells are opened so may merit comprehensive and systematic efforts with other assays and conditions.”

“We’re not trying to rule out that there’s not a single atom of arsenic anywhere,” Kruglyak says. “The point is that once we’re talking about those types of levels the bacteria are not using it productively to grow, which was the claim of the original paper.”

“In principle I was open to whatever we would find,” Vorholt adds. “I didn’t necessarily believe arsenic would be incorporated in the DNA, but I thought it would be interesting to look at metabolism.”

In addition to Wolfe-Simon, the original work had 11 other coauthors. Those collaborators reached by C&EN, as well as NASA itself, emphasized the need for more study of GFAJ-1.

Wolfe-Simon’s work “was anticipated to generate significant scientific attention, given the surprising results,” writes Michael H. New, astrobiology discipline scientist in NASA’s Planetary Science Division in a statement. “What has emerged from these three papers is an as yet incomplete picture of GFAJ-1 that clearly calls for additional research.”

“The lab I run is re-examining the original experiments after devising a new medium that eliminates the problem of background phosphorus contained in the reagents first employed,” says Ronald Oremland of the U.S. Geological Survey, one of Wolfe-Simon’s coauthors. He also notes that the trait of arsenic-dependent growth may be lost over time, so “efforts should be undertaken once again to isolate new strains from Mono Lake” with his lab’s new medium.

“The new papers certainly bring interesting observations to the table that do not support some of the earlier, original hypotheses,” says Samuel M. Webb, beam line scientist at the Stanford Synchrotron Radiation Lightsource. But he says he stands by the X-ray absorption studies he conducted for the original work.

Coauthor Thomas R. Kulp, who has recently started his own lab at Binghamton University, says he stands by the observation that arsenic stimulates GFAJ-1 growth at limiting phosphorus concentrations, which stands in contrast to results in the new studies. He says that the new studies have discrepancies in growth patterns. In particular, one group had to add glutamate to observe growth while the other didn’t. This bears more investigation, he says.

“I am glad that there are new data to work with. That’s what is needed to figure things out. That’s how science works,” adds senior coauthor Ariel Anbar of Arizona State University.

It’s not enough to say science is self-correcting, contends David Sanders, who studies enzymatic phosphoryl transfer at Purdue University and has written critically about the original work in the blog Retraction Watch. “The text in the original paper misrepresents data in the supplementary information,” and so the paper should be retracted by Science, he says.

“What can I say? Chemistry is vindicated,” says Steven A. Benner of the Foundation for Applied Molecular Evolution in Florida, who has disagreed with Wolfe-Simon’s interpretations since her findings were published. Both of the new refutations are studies of extremely high quality, Benner says. “I cannot imagine that any set of experiments will ever lead to the same conclusions that Felisa drew in her Science paper 18 months ago.

“If I were Felisa, I would say ‘It is clear that our interpretation was wrong’ and move on.”

Carmen (July 12, 2012 8:52 AM)
Thank you for pointing out my mistake, Luke. We're updating the post and you should see the correct name shortly.
Reply »