On March 2, a Global Hawk drone finished a series of surveillance flights. But the remotely piloted aircraft was not monitoring terrorist activities. It was traversing high above the tropical Pacific Ocean loaded with scientific instruments and scanning for ways that changes in high-altitude humidity might affect climate.

So they have sent the 44-foot-long drone into the atmosphere above the Pacific Ocean to find out. The aim of the project is to better understand how water enters the stratosphere. Run by the National Aeronautics & Space Administration (NASA), the mission is called the Airborne Tropical Tropopause Experiment (ATTREX), and continues until 2015. 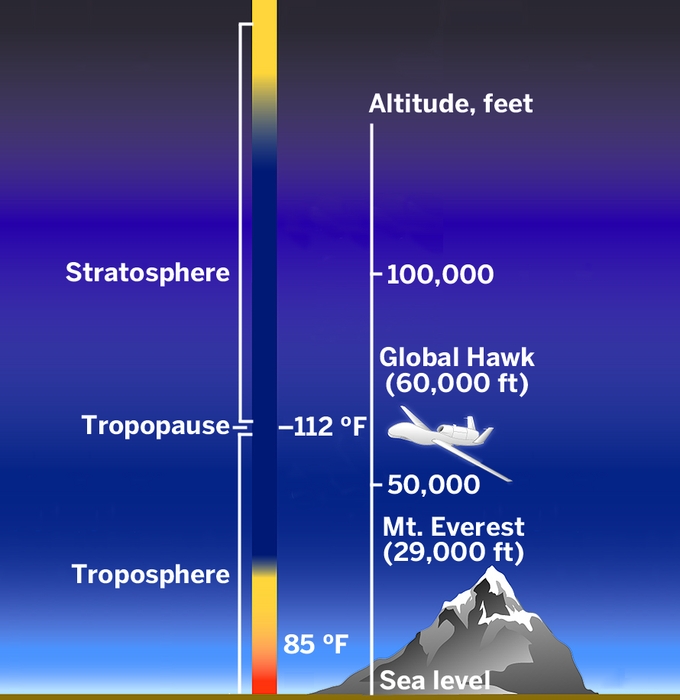 Above the equator, the tropopause has an altitude of about 60,000 feet and temperatures hover around –80 ºC, or –112 ºF. This layer of the atmosphere acts like a cold trap to dehydrate rising air, leaving it with about 4 ppm water. That’s orders of magnitude less than on Earth’s surface, where humidity is typically described in percent, or parts per hundred.

Flying up to 60,000 feet requires a special kind of aircraft. Typical passenger planes cruise at about 35,000 feet. NASA has three high-altitude aircraft, says Eric J. Jensen, a research scientist at the NASA Ames Research Center and ATTREX’s principal investigator. Two are piloted and can take larger payloads than the Global Hawk, but they can stay in the air for less than 10 hours per flight. The drone carries less equipment but can stay in the air for 30 hours at a time.

That extended flight time allowed NASA to fly its first ATTREX flights from the agency’s Dryden Flight Research Center in central California, a six- to eight-hour flight from the tropics. To extend data collection times, the aircraft will move to the tropics next year, flying from the island of Guam in the Western Pacific Ocean.

NASA’s Global Hawk is one of the first few made by Northrop Grumman, and it was repurposed from military use. For ATTREX, the drone carries 12 scientific instruments that measure meteorological properties such as temperature, pressure, and wind direction and speed, as well as water vapor, ozone, carbon dioxide, sulfur hexafluoride, bromine oxide, and various forms of radiation. One instrument collects 90 air samples per flight for additional analysis on the ground.

With these tools, the researchers analyze carbon dioxide data to determine air transport time through the tropopause, Jensen explains, while sulfur hexafluoride provides information on air mixing. Atmospheric scientists are interested in bromine oxide because it destroys ozone, but they aren’t certain how much of it makes it from the tropopshere into the stratosphere. Data from ATTREX should help fill that knowledge gap.

HIGH-ALTITUDE ASSAY
[+]Enlarge
Credit: NASA/Tom Tschida
The ATTREX drone is loaded with instruments to measure water and other compounds in the tropopause. 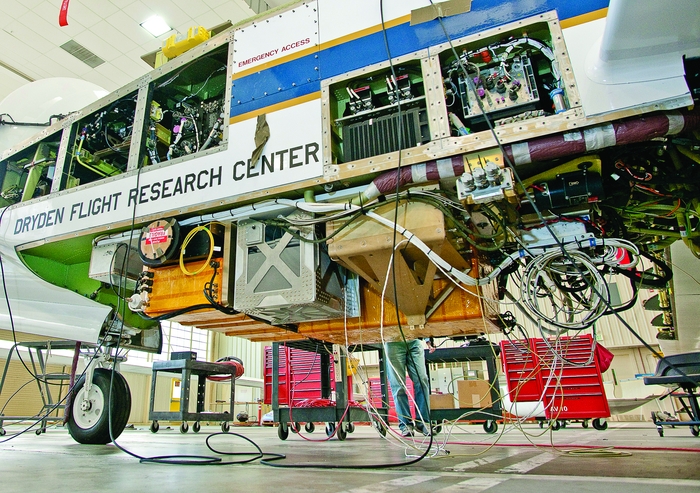 Credit: NASA/Tom Tschida
The ATTREX drone is loaded with instruments to measure water and other compounds in the tropopause.

The drone’s primary target, water vapor, is particularly difficult to measure. “It tends to condense on every surface in sight, and it comes off those surfaces very slowly,” Jensen says. One water analysis instrument on the ATTREX drone was developed by National Oceanic & Atmospheric Administration researchers and uses high sample flow to help solve these problems. It measures water vapor concentration to less than 1 ppm by monitoring an infrared absorption signal. The instrument is also calibrated in flight rather than on the ground, where different operating temperature and pressure could lead to measurement errors in the air.

During ATTREX flights, operators are in near-constant contact with the drone and scientific instruments. They monitor data in real time and adjust instrument settings as needed. “That’s worked extremely well,” Jensen says. The crew has also adjusted flight plans on the go, such as directing the drone to fly up and down through thin cirrus clouds.

Such vertical profiles push the Global Hawk’s capabilities, Jensen says. It was designed to go up and cruise at one particular height for military missions. But on one ATTREX flight in February, the crew took it from 45,000 to 58,000 feet and back again, repeating this 12 times. “We didn’t know for sure how well it would do,” Jensen says. “But we’re getting exactly what we wanted.” To allay concerns about revealing the aircraft’s limits to foreign-national scientists on the ATTREX team, the team has taken measures to restrict access to some information. Those measures haven’t affected ATTREX operations, Jensen says.

ATTREX is a five-year, $30 million mission. It is one of NASA’s Earth Venture missions, which are relatively small and low-cost projects that are funded competitively through the Earth System Science Pathfinder program. After the ATTREX flights end in 2014, researchers will use the rest of the funding period to analyze data, Jensen says.

Astrochemistry
Venus has a more complex atmosphere than scientists thought
Atmospheric Chemistry
First direct measurements of atomic bromine in the atmosphere reported
Atmospheric Chemistry
Space weather satellites set to launch
Share X
To send an e-mail to multiple recipients, separate e-mail addresses with a comma, semicolon, or both.
Title: NASA Sends Drone To Stratospheric Heights
Author: Jyllian Kemsley
Chemical & Engineering News will not share your email address with any other person or company.