Microdialysis In The Operating Room

KEEPING TABS
[+]Enlarge
Credit: Martyn Boutelle
A microdialysis probe (inserted at left) monitors tissue removed from a patient’s forearm for use in a free-flap reconstructive surgery. 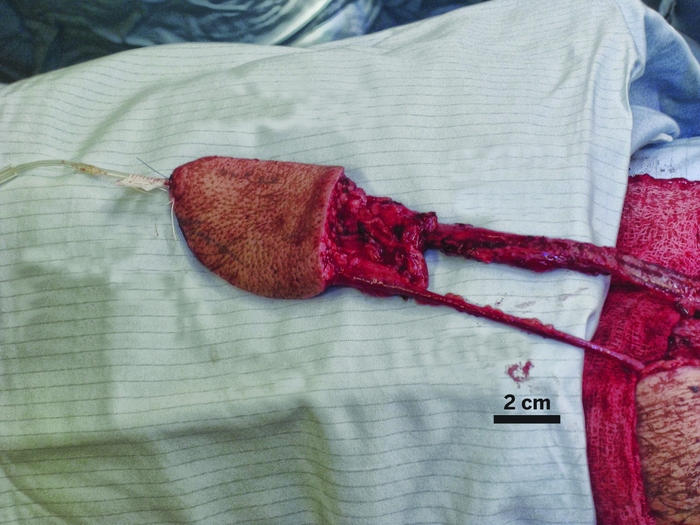 Credit: Martyn Boutelle
A microdialysis probe (inserted at left) monitors tissue removed from a patient’s forearm for use in a free-flap reconstructive surgery.

Microdialysis Under The Knife

The tissue for such rebuilding efforts usually comes from another part of the patient’s body, such as the abdomen or an arm or a leg. In a procedure called free-flap surgery, surgeons remove skin, muscle, and sometimes bone, with the accompanying blood vessels, from one place and reconnect them in another.

But the operations are not always successful. Up to about 9% of free flaps fail on the first attempt. The failure rate can be even higher for second attempts. Part of the problem is that the conventional ways of detecting failure—checking the color, temperature, and texture of the tissue—are subjective, and signs of a healthy or unhealthy flap are hard to discern. The problem is particularly true for so-called buried flaps that are totally hidden from view.

Martyn G. Boutelle and coworkers at Imperial College London are developing a method to give surgeons accurate information about flap health in real time, during the operation and recovery. Boutelle’s team, especially postdoc Michelle L. Rogers, has developed a technique called rapid-sampling microdialysis for monitoring molecules key to tissue survival. In microdialysis, small molecules such as blood sugars from the extracellular space in the tissue diffuse across a membrane into a fluid stream, which carries them away for analysis.

To use the method, surgeons insert a micro­dialysis probe into the flap before they detach the tissue from its original location. Rogers, who is in the operating room during the procedure, electrochemically measures glucose and lactate in the microdialysis fluid.

“We were insistent about putting the probe into the flap early,” Boutelle said. That way, the surgical team knows the patient’s basal levels of the markers, and the patient acts as his or her own control, he explained.

After the flap is detached from its blood supply, the only blood available is what remains in the flap vasculature. Glucose levels reveal whether this blood can still feed the cells. High lactate wlevels signal that cells have depleted oxygen in the blood and have resorted to anaerobic respiration, which will occur naturally the longer the flap is isolated from a blood supply.

The lactate/glucose ratio is more informative than measurement of either molecule alone. The ratio typically climbs during surgery as cells deplete glucose and produce lactate. Too high a ratio can warn of critical depletion of nutrients in the blood, or ischemia, leading to tissue damage.

Although the researchers have monitored only eight patients so far, they’ve already detected two early flap failures. One case involved a complicated surgery to reconstruct the patient’s jaw using muscle and bone from his leg. Such surgeries usually take about eight hours, but that one stretched to more than 14 hours because of other medical problems. In that case, the lactate/glucose ratio continued to climb even after the flap was reconnected in its new location.

“They expected a large amount of blood to wash through the tissue and for the level to come back to normal,” Rogers told C&EN. “We didn’t see any change.”

Rogers continued to monitor the patient for 10 hours in the intensive care unit. During that time, the flap didn’t fail, but the lactate/glucose ratio increased greatly. The flap failed a second time a few days later, after they had ceased microdialysis monitoring. It was successfully salvaged again, only to permanently fail about a week after surgery. Brennan later determined that the patient had an underlying disorder that caused blood clot formation and vessel destruction.

“This is a fantastic technique that, unlike conventional microdialysis, tells us what is going on in the flap in real time,” Brennan said. Conventional microdialysis can take more than an hour to collect a sample and additional time to analyze it and return the results. The rapid sampling method “has huge potential for future care of our patients and for understanding the changes that occur at a metabolic level during the harvesting and rejoining of free flaps.”

The technique is still in its early days as a surgical tool. “It relies a lot on the goodwill of the clinical teams,” Boutelle said. It’s got to be the lead surgeon’s project as well, he added, to make sure everybody else is on board. Moving forward, the team plans to monitor a larger cohort of patients to prove that the method can make a difference in clinical outcomes.