LGX818, Made To Fight Melanoma

Targeted drugs such as Gleevec have changed the face of cancer therapy. But cancer has a way of developing resistance to even these customized treatments, which are designed to block kinase enzymes gone awry. At the meeting, Novartis chemistry group leader John Tellew talked about LGX818, a drug candidate taking aim at resistant melanoma.

LGX818, Made To Fight Melanoma

Roughly 50% of all melanoma patients have tumors with a mutation to a kinase called BRAF, which normally transmits cell growth signals. The most common BRAF mutation, which replaces a valine amino acid with a glutamic acid, also occurs in some colon and thyroid tumors. This abnormal BRAF turns the signaling pathway on in an unregulated fashion. A drug on the market called vemurafenib targets this V600E mutation specifically. But while patients initially respond to this drug, nearly all develop resistance and relapse within months.

To face this challenge it took two teams at the Novartis Institutes for Biomedical Research—Tellew’s, in San Diego, and Daniel J. Poon’s, based in Emeryville, Calif. The groups had regular videoconference meetings and shipped samples to each other, up and down the California coast, Tellew told C&EN. 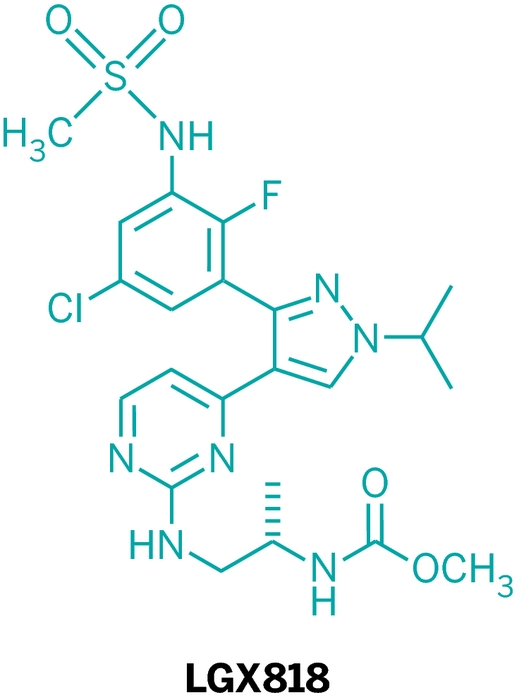 It’s possible to block BRAF with molecules that bind to any of several forms of the kinase, including the active form and two inactive conformations. The Novartis team began by targeting the active form. Phenol and oxime motifs are common in these types of inhibitors, but they can lead to compounds with too poor pharmacokinetics to be useful.

Working with a tri­arylimidazole skeleton, the team found that 2-amino-3-methoxypyridine was a decent replacement for the phenol or oxime. Although the resulting compounds passed biochemical tests for selectivity and druglike properties, they didn’t shrink tumors in mice at tolerated doses, so it was back to the drawing board.

With abbreviated efficacy and tolerability studies in mice, designed to speed throughput, they evaluated many compounds until they found better options, such as sulfonamides. Their drug candidate, LGX818, emerged after extensive tweaks to a sulfonamide. It binds not to the active form of the kinase but to an inactive form—much like vemurafenib. Compared with vemurafenib, however, LGX818 was superior at killing mutant BRAF tumor cells.

LGX818 is currently in Phase Ib/II clinical trials. Patients with colon cancer or melanoma with the BRAF mutation, including patients resistant to other BRAF-targeted drugs, are receiving LGX818 pills alone or as part of drug cocktails to determine whether the drug is safe and efficacious.

Biological Chemistry
Tumor-Targeted Probes Seek Out And Halt Cancers
Biological Chemistry
Copper’s Role In Cancer
Pharmaceuticals
Novartis First-Generation Lung Cancer Drug Tweaked To Reduce Potential Side Effects
Share X
To send an e-mail to multiple recipients, separate e-mail addresses with a comma, semicolon, or both.
Title: LGX818, Made To Fight Melanoma
Author: Carmen Drahl
Chemical & Engineering News will not share your email address with any other person or company.

Gary Larrabee (October 2, 2014 10:53 AM)
LGX818 has shrunk my tumor mass in my chest, near my right lung, by 85 percent over the last 11 months. I will be forever grateful for the quality time this drug has given me while on a clinical trial at Mass. General, no matter what happens from here.