Ernest Moniz Nominated As Next Secretary Of Energy

If confirmed by Senate, academic physicist to become 13th secretary

UNDER CONSIDERATION
[+]Enlarge
Credit: Michael Reynolds/EPA/Newscom
Moniz faces questions from senators on the Energy & Natural Resources Committee during his confirmation hearing on April 9. 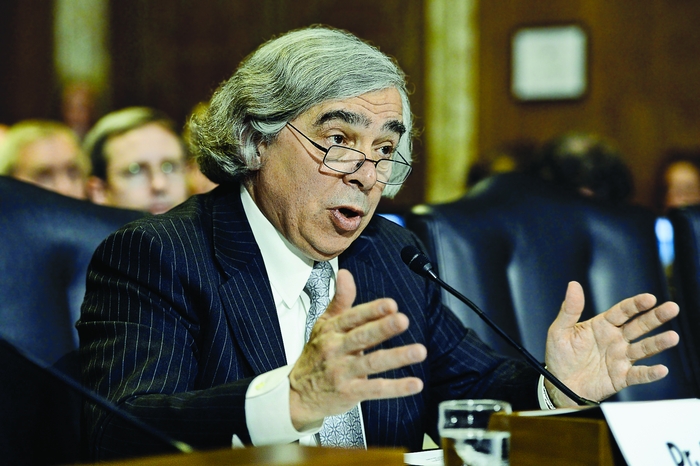 Credit: Michael Reynolds/EPA/Newscom
Moniz faces questions from senators on the Energy & Natural Resources Committee during his confirmation hearing on April 9.

Energy secretary nominee Ernest J. Moniz, if confirmed by the Senate, would come to the Department of Energy with a broad understanding of energy issues and greater institutional knowledge than any previous energy secretary.

This background will be critical, as the next Energy Department secretary’s challenge will be to advance the nation closer to a low-carbon future and through a tangle of conflicting views and powerful interests in energy.

In selecting Moniz, a former energy undersecretary, President Barack Obama has continued his practice of choosing science-rich energy secretaries with long experience in the Department of Energy. If confirmed, Moniz, a highly recognized academic physicist, will follow Nobel Prize winner Steven Chu, another physicist with long experience within DOE, both as a researcher and as the director of a leading department lab, Lawrence Berkeley National Laboratory.

Moniz’ sterling credentials were touted earlier this month by two strong advocates, who introduced Moniz at the start of his confirmation hearing before the Senate Energy & Natural Resources Committee.

“I have been involved in national security issues related to energy and national security for decades,” Scowcroft explained, “and I can honestly say I do not know anyone more suited to lead the Department of Energy at this difficult time than Dr. Moniz.”

Ernest J. Moniz, 68, is the Cecil & Ida Green Professor of Physics & Engineering Systems at Massachusetts Institute of Technology, where he has been a faculty member since 1973. His primary areas of interest are in energy technology and policy. He received a B.S. in physics from Boston College (1966) and a Ph.D. in physics from Stanford University (1971).

At MIT, Moniz has been head of the physics department as well as director of the Bates Linear Accelerator Center, the Laboratory for Energy & the Environment, and the MIT Energy Initiative. This last initiative—with which Moniz estimates one-quarter of campus faculty are involved—is a campuswide effort to facilitate energy research, education, and outreach.

Outside MIT, Moniz was associate director for science in the White House Office of Science & Technology Policy from 1995 to 1997 and an undersecretary of energy at the Department of Energy from 1997 to 2001.

Moniz has testified before Congress 12 times since 1988 on a range of issues, such as DOE funding, nuclear power, natural gas, coal, the Fukushima disaster, and research and development issues. He has also been appointed to several government committees, including the President’s Council of Advisors on Science & Technology (2009–present); the Department of Defense Threat Reduction Advisory Committee (2010–present); and the Blue Ribbon Commission on America’s Nuclear Future (2010–12).

Moniz has also served on several National Research Council study panels and is a fellow of the American Association for the Advancement of Science, the Humboldt Foundation, and the American Physical Society.

He is married with one daughter and two grandchildren. His grandparents emigrated from the Azores islands; he attended college on a scholarship from his father’s labor union.

Bingaman stressed Moniz’ managerial skills as well as his energy knowledge, nuclear weapons experience, and history of holding top positions in DOE and the White House. Bingaman, who served in the Senate for 30 years, also noted Moniz’ frequent testimony before Congress.

Both stressed Moniz’ contribution to the national energy debate through research and teaching at Massachusetts Institute of Technology—where he is currently the Cecil & Ida Green Professor of Physics & Engineering Systems. Moniz and his MIT counterparts have produced a series of detailed books on energy topics—coal, nuclear power, the electric grid, geothermal energy, and other areas. The two hearing witnesses each said that the series has served as a national technology and policy guide, particularly for Congress.

These views were shared by most on the committee and within a week of the confirmation hearing, the committee approved Moniz with only one negative vote.

That single negative vote, however, shows the complexity of problems Moniz faces. Sen. Tim Scott (R-S.C.), a conservative who won his first term with Tea Party backing, grilled Moniz, urging him to promise to continue funding of a $7.7 billion nuclear facility in South Carolina. DOE committed to the mixed oxide plant in the 1990s, when Moniz was undersecretary of energy. When completed, it would make mixed oxide fuel for nuclear reactors from surplus U.S. and Russian weapons-grade plutonium. The facility is 60% complete, Scott noted, and is required under an agreement between the two countries.

However, the project is several years late and 300% over budget, and its fate is uncertain. Despite Scott’s prodding, Moniz would not firmly commit to the project’s completion, saying that decision would await his confirmation. Scott, despite his conservative bent, is pushing hard for more government spending, both for his South Carolina constituents and to comply with an agreement with Russia, he said in a statement explaining why he voted against Moniz’ nomination.

At C&EN press time, Sen. Leslie Graham (R-S.C.) echoed Scott’s objection and put a hold on Moniz to block a full Senate vote on his confirmation until DOE agrees to move ahead on the facility. The mixed oxide construction program is slated for a 27% cut under the President’s 2014 budget proposal.

In the course of the committee confirmation hearing, Moniz faced three hours of senatorial questioning reflecting the strong parochial views of each senator’s constituents as well as their campaign supporters. He fielded queries about every energy resource—coal, natural gas, nuclear, solar, wind, renewables, and others.

Several senators questioned Moniz on his view of the nation’s use versus export of America’s newly found natural gas bonanza. DOE is in the throes of considering more than a dozen permits to export liquefied natural gas. The oil and gas industry and its supporters have urged DOE to quickly approve the proposed export terminals. However, Dow Chemical and other chemical companies that use natural gas and ethane for fuel and feedstock are lobbying for a slower path to exports. Chemical companies want to retain their production advantage over competitors that use more expensive oil-based feedstocks.

“Stunning” was how Moniz described the flood of new domestic natural gas and oil production over the past four years. The natural gas “revolution,” he added, has led to a reduction in carbon dioxide emissions as well as a dramatic expansion of manufacturing and job opportunities.

But he was circumspect when pressed by Wyden and others who want DOE to redo a recent department-funded study that determined that exports are good for the economy and should go forward. Wyden represents Oregon, which does not produce gas. However, three new export terminals, pipelines, and infrastructure additions are proposed for the Northwest coast. On the other hand, Moniz also heard from the committee’s ranking Republican, Sen. Lisa Murkowski, who wants DOE to move on with the terminals. She hails from Alaska, which has a strong gas drilling industry and insufficient pipelines to move gas to the lower 48 states. She wants DOE to approve a pending gas terminal license application, and she reminded Moniz that Alaska is the only U.S. state to have had an operating export terminal.

Moniz appeared to agree with them both. He said he would closely examine the study and ensure the data are relevant to the decision. He told the senators that the department should move ahead on the export permits, but with a “transparent, analytically based evaluation, applicant by applicant.”

Wyden seemed satisfied with his answer, saying, “I asked if he would revisit the issue, and he said he would.”

Moniz has been a big supporter of natural gas. Natural gas, he has noted, could help combat climate change—an issue of concern to him—because of its potential to reduce CO2 emissions. Specifically, because natural gas has half the carbon emissions of coal, gas could be a bridge fuel from coal. Nevertheless, he has also said that eventually even gas will require carbon capture and sequestration to control carbon emissions.

His promotion of natural gas has concerned some environmental activists and renewable energy developers, however. They fear Moniz may rely too strongly on gas and thus stall research and development and market penetration for renewables. As a result, they have said Moniz might not continue the push for renewables exhibited by previous energy secretary Chu.

But during the hearing, coal supporters warned Moniz that more DOE support is necessary to continue coal’s use in a carbon-constrained world. One of the most vocal was Sen. Joseph Manchin III (D-W.Va.), who brought charts to back up his argument that DOE gives too much support to renewables and too little to coal. He pointed to coal-related R&D spending versus renewable energy research and also urged Moniz to cut subsidies to solar and wind energy sources. Moniz began to offer a response stressing his support for carbon capture and development, but Manchin cut him off, saying he wants a “balance” in spending between coal and other sources of energy.

Less than 20 minutes later, however, Sen. Mark Udall (D-Colo.) told Moniz about his adventure at DOE’s National Renewable Energy Laboratory in Colorado, where he climbed to the top of a 260-foot wind turbine. In his questioning, Udall underscored the need to control carbon emission and then took the opportunity to chide Manchin for his support of coal.

Once confirmed, Moniz will need to immediately begin negotiating the potholes in the world’s drive to cut greenhouse gas emissions and slow and reverse the impact of climate change while holding at bay those who depend on and profit from fossil fuels.

Environment
Striving To Capture Carbon
Environment
Energy: More Dollars For Clean And Renewable Energy R&D
Environment
A Focus On Manufacturing
Share X
To send an e-mail to multiple recipients, separate e-mail addresses with a comma, semicolon, or both.
Title: Ernest Moniz Nominated As Next Secretary Of Energy
Author: Jeff Johnson
Chemical & Engineering News will not share your email address with any other person or company.