At The Origin Of Life, RNA May Have Been A Mixture

Varied structure may have allowed RNA to replicate without proteins’ help 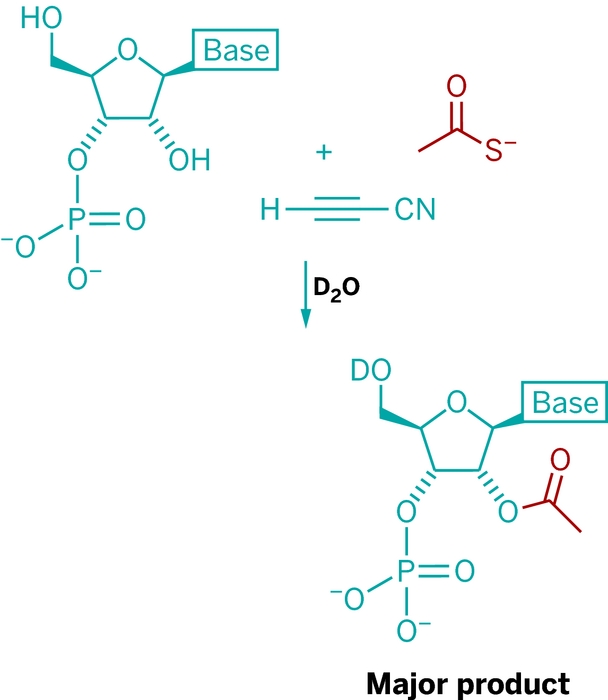 How life on Earth emerged is a big question for chemistry. The answer, some chemists contend, has to do with ribonucleic acid. RNA is versatile, the argument goes. It can both store information like DNA and catalyze reactions like proteins do. It follows that RNA may have been the precursor to today’s biology and that Earth was once an “RNA world.” Presumed remnants of that world are seen in biology today.

The reality is likely more complicated than that, as the past few years of origin-of-life work suggest. In that same vein, two new reports address RNA and its backbone—how it may have been assembled in an epoch before protein enzymes and how it could once have been messier than it is today.

One report comes from John Sutherland, whose team concocted a prebiotically plausible synthesis of RNA building blocks from simpler starting materials in 2009. Based at the Medical Research Council Laboratory of Molecular Biology, in En­gland, he’s since been preoccupied with taking those concepts to the next level—to the synthesis of RNA polymers.

For inspiration, he looked to 1970s work from origin-of-life pioneer Leslie Orgel. Orgel tried to polymerize cyclic nucleoside phosphates, the same types of RNA building blocks Sutherland made. But Orgel got only as far as making 14-nucleotide RNA oligomers because hydrolysis prevented the formation of longer assemblies.

In that study, Orgel obtained mixed RNA backbones. Nature assembles RNA with one type of backbone linkage—between the 3' hydroxyl group on one ribonucleotide sugar and the 5' phosphate on another. But Orgel’s oligomers, like those of others who have attempted primeval RNA synthesis, contained both 3'–5' and 2'–5' linkages.

“Everyone assumes that to make RNA you have to go directly from monomers,” Sutherland says. But he and his coworkers took a different route in their new study—building Orgel’s oligomers and then stitching those together into bigger chains (Nat. Chem., DOI: 10.1038/nchem.1626). 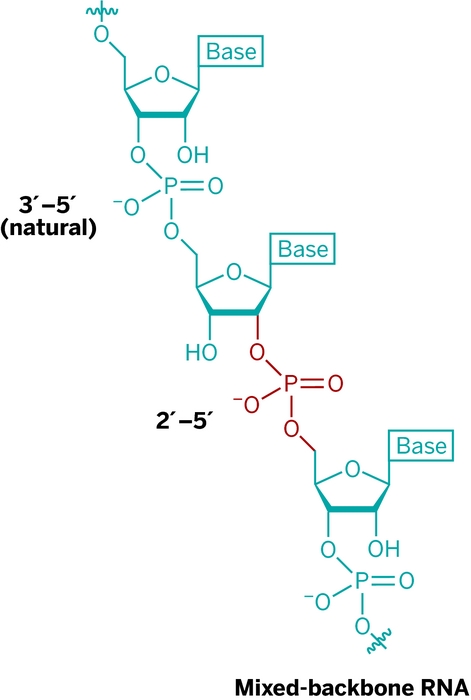 To overcome hydrolysis, they used one of the oldest tricks in the organic chemistry book: a protecting group. They protected a vulnerable hydroxyl group with thioacetate. That motif preferentially covers up 2' hydroxyls, which means the oligomers join through relatively few of the unusual 2'–5' linkages. After ligation is complete, the protecting groups slowly come off with a dilute ammonia solution.

Protecting-group chemistry in the RNA world might seem unexpected, but Sutherland shrugs off questions about why biology would have to resort to protecting groups like a mere chemist. He thinks the protecting-group idea unifies the RNA world hypothesis with another origin-of-life theory that emphasizes metabolism. That theory suggests that activated acetyl groups like thioacetate were available reagents on an early Earth. “If you consider metabolism or RNA on its own, you don’t get far,” he says. “But if you start thinking about metabolism and RNA coevolving, then you can get somewhere.”

“The classic RNA world model focuses on a single entity that does it all,” adds Matthew W. Powner, Sutherland’s coauthor and former grad student, now an independent investigator at University College London. “That might be asking too much of one molecule and might miss out on what other molecules contribute.”

Sutherland’s ligation still yields RNA with mixed backbones, because it uses Orgel’s material and because it’s not 100% selective for a single type of ligation. But mixed linkages might not have been a deal breaker at the dawn of life, according to work Powner did as a postdoc in Jack W. Szostak’s Harvard Medical School lab (Nat. Chem., DOI: 10.1038/nchem.1623).

Powner, Szostak, and Aaron E. Engelhart tested two different types of functional RNAs—an aptamer and a ribozyme—to see how some 2'–5' linkages in their backbones would affect them. The RNAs could still fold properly, bind to targets, and catalyze chemical reactions with as much as a quarter of 2'–5' linkages. “We were all pretty surprised,” Szostak says.

Prebiotically plausible RNA syntheses, including Sutherland’s new work, typically obtain around 25% 2'–5' linkages, Szostak says. So he thinks chemists needn’t rule out mixed backbones when thinking about how RNA might have arisen. A mixture may even have been helpful, he adds. A sprinkling of 2'–5' links makes double-stranded RNA come apart easily in water. Long ago, RNA would have had to replicate itself, Szostak explains, and the tightly bound double-stranded structure that today’s RNA can adopt makes envisioning it ever coming apart to replicate on its own difficult.

“No chemists lived on the early Earth,” says Gerald F. Joyce, an expert in RNA and origin-of-life research at Scripps Research Institute California. “So it was just this big gemisch of molecules,” he says. These reports, he adds, embrace that complexity in different ways and even find benefits to it. “Prebiotic chemistry can be messy, but biology lives off that mess.”