Surface Chemistry: Carbenes on gold could lead to new family of functional materials 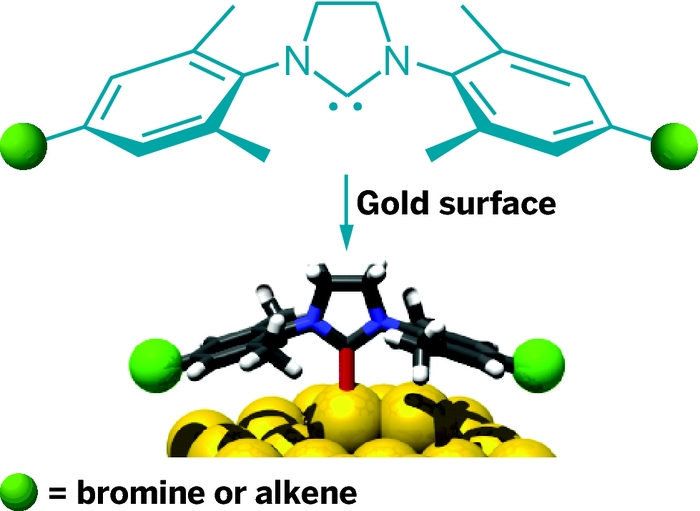 Since the early 1980s, functional surfaces formed by decorating gold substrates with thiol groups have been fruitful materials for ­fabricating biosensors and chemically resistant ­surfaces, ­aligning nanotubes, and designing a range of other microelectronics and sensor devices. But the ways that thiols can be functionalized to create useful devices are limited. In addition, thiol-gold surfaces break down when warmed, and they are poor conductors, limiting their use for some molecular electronics ­applications.

Researchers now report success in using a different decorating scheme to create surfaces that could lead to a new family of functional materials. Instead of ­adding thiols to gold, Jeremiah A. Johnson and coworkers at MIT create functional materials by enhancing gold layers with N-heterocyclic carbenes, or NHCs (J. Am. Chem. Soc. 2013, DOI: 10.1021/ja401965d). NHCs are electron-rich ligands that form strong and highly stable electrically conductive surfaces on gold. They are also extraordinarily versatile in their ability to be modified with a variety of chemical groups, which could lead to previously inaccessible types of surface functionality.

Johnson and coworkers demonstrate the technology by attaching an olefin metathesis catalyst to an NHC-gold surface and using the resulting catalytic surface to polymerize strained olefins, yielding highly fluorinated polymers. Olefin metathesis catalysts can also be added to thiol-gold surfaces, but NHCs are much larger than thiols and have bulky aryl groups that might cause them to align on the surfaces in very different ways—potentially leading to new types of surface functionality that are not currently achievable.

A wide array of NHC structures are known, and Johnson says that in future work he and his coworkers hope to leverage some of these to create derivatized NHC-gold surfaces with new functions.

Johnson’s group is not the first to think of decorating gold with NHCs. NHCs have been used to derivatize gold nanoparticle surfaces. And organometallic chemist Ulrich Siemeling of the University of Kassel, in Germany, and coworkers added them to bulk gold surfaces two years ago. However, NHC-gold surface functionality was not previously achieved.

The new technique is competitive with thiols on gold, which is “the best system we have right now for monolayer fabrication,” Siemeling says, “and it broadens the scope for adding functionality to a surface.”