At UC Berkeley, an undergraduate-led course on the chemistry of nutrition builds communication skills through science writing

COMING TOGETHER
[+]Enlarge
Credit: Michael Barnes
Plamthottam (center, in black) and her classmates look over the final pages of the latest issue of Science of Wellness. 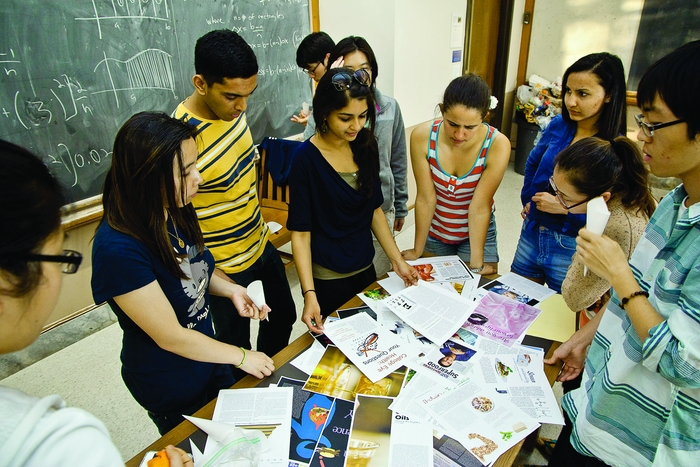 Credit: Michael Barnes
Plamthottam (center, in black) and her classmates look over the final pages of the latest issue of Science of Wellness.

Last year, in a course called the Science of Wellness, some undergraduates at the University of California, Berkeley, found the best way to learn a subject is by explaining concepts to others.

Created and run by undergraduates majoring in the chemical sciences, this semester-long course (scienceofwellness.org) helps students learn about the chemistry behind nutrition and develop their communication skills by teaching one another to write about the topic for a broader audience. At the end of the course they publish one issue of a student-run magazine, Science of Wellness.

The magazine existed for a year before it became a course. Sheba Plamthottam, who graduated last month with a B.S. in chemical biology, launched Science of Wellness in 2011 because she was fascinated by the intersection of chemistry and nutrition and was looking for a publication for which she could write about it. Not able to find one, she decided to start a magazine of her own.

Plamthottam, who served as editor of her high school newspaper and now serves as the magazine’s editor-in-chief, initially started Science of Wellness as a student-run organization, but she realized that to recruit more writers, copy editors, and designers, she would need to train her fellow students in these skills. She created a syllabus and applied to Berkeley’s student-run democratic education program, called DeCal, which allows students to create and facilitate courses on topics of interest to them.

Marcin Majda, a professor of chemistry and undergraduate dean of the College of Chemistry at UC Berkeley, who sponsored the course, says it fills a gap in education. “There is no substitute for this type of learning,” he says. Traditional “courses give students knowledge about fundamental issues, but as much as we try, it is hard for students to integrate that knowledge and see how it applies to everyday life.”

Fifteen students enrolled the first time the class was offered in the fall of 2012. It counts toward students’ overall course credits and is pass/fail, so no grades are given; classes are held once a week. It was offered a second time this past spring.

During the first 30 minutes of each class, Plamthottam and her classmates lectured on topics such as technical writing and interviewing skills. The remainder of each class was spent sharing ideas, offering feedback to one another, and working on the magazine.

“Communicating science is very important, and the goal of the magazine is to make the community aware of scientific inquiry and how to read evidence and critically assess it,” Plamthottam says.

A recent chemical biology graduate, Kevin Wang, who served as a writer and a Web designer for the magazine, says the course made him realize that “there’s more to science than just working in a research lab.”

Researching topics for articles forced him to reach out to professors in fields he would not otherwise have been exposed to. For example, for an article on how technology has affected vision, he interviewed a professor of optometry. Tackling unfamiliar subjects gave him a broader exposure to the real-life applications of chemistry, he says.

Plamthottam says that because the course brings together students majoring in different fields of science, from chemistry to molecular and cell biology to nutritional science, it offers a rich environment for students to learn from each other and work toward a common goal.

Michael Barnes, staff adviser for the course and a writer and editor of publications in the College of Chemistry, says the course helps prepare students to be better communicators of their science, whether they are publishing their research results in a journal or presenting their work at a conference. “The ability for these students to become adept at using graphics, putting them into PowerPoint, creating cool molecular models, that’s very much a useful skill for them to have,” he says.

Although she just graduated and will be pursuing a Ph.D. in chemistry at UCLA, Plamthottam says the magazine will continue to be published. Whether it’s offered again as a DeCal course or becomes a student organization remains to be seen. But as far as Plamthottam is concerned, her experiment has been an enormous success.

Graduate Education
Grappling with the decision to leave grad school
Nontraditional Careers
Former US FBI director James B. Comey on majoring in chemistry and how it affected his career
Education
ACS Award for Achievement in Research for the Teaching & Learning of Chemistry: Marcy H. Towns
Share X
To send an e-mail to multiple recipients, separate e-mail addresses with a comma, semicolon, or both.
Title: Learning By Teaching
Author: Linda Wang
Chemical & Engineering News will not share your email address with any other person or company.

Comments
Bob Buntrock (June 11, 2013 3:34 PM)
Very interesting course and project. I was pleased to see their evaluation of HFCS as not less healthful than sucrose. As a long time advocate of "alternative"careers for chemists, I was also pleased to see that at least one student now sees that there's more to chemistry than a lab job.
Reply »