WORLD SCALE
[+]Enlarge
Credit: Global Research Council
After a meeting last month in Berlin, leaders from about 70 research funding agencies around the world agreed on a set of principles to drive open-access publishing. 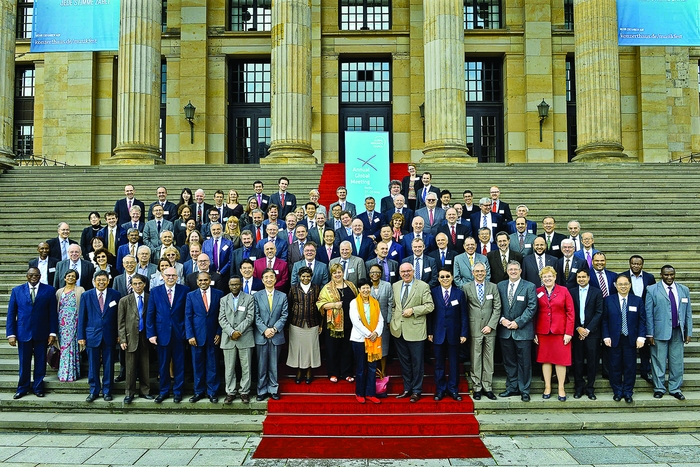 Credit: Global Research Council
After a meeting last month in Berlin, leaders from about 70 research funding agencies around the world agreed on a set of principles to drive open-access publishing.

Earlier this year, the White House Office of Science & Technology Policy (OSTP) directed all federal agencies that fund $100 million or more in scientific research to develop a plan to make the results of that research freely available. The directive applies to both publications and digital data resulting from taxpayer-funded research. Nineteen agencies are now scrambling to come up with their draft plans by August, the deadline set by OSTP.

The National Institutes of Health is the only federal agency that currently has a public-access policy, but it applies only to peer-reviewed publications, not data. Established in 2008, that policy requires NIH grantees to make research articles that arise from NIH funding accessible in the public archive PubMed Central within one year of publication.

• Susan King talks about the rationale, goals, and next steps for this new proposed partnership between publishers and federal agencies to meet the OSTP’s public-access directive.

Some people have suggested making PubMed Central a repository for all federally funded research results, not just NIH-funded results, as a way for other federal agencies to meet the goals set in the OSTP directive. But hosting such a database has associated costs, and NIH would have to charge other federal agencies to cover the costs of managing the additional content.

Faced with dwindling budgets and no new money for open-access efforts, many of the agencies are instead turning to partnerships with scholarly publishers and libraries to leverage resources and keep costs down as they try to comply with the OSTP mandate.

One such effort, announced last week, is a proposed collaboration among federal agencies and scholarly publishers called the ClearingHouse for the Open Research of the U.S. (CHORUS). The partnership would enable federal agencies to identify journal articles that result from federally funded research. CHORUS would also provide a framework for public access to peer-reviewed versions of such articles, archiving and preservation of the articles, discovery and search services, and a way for agencies and research institutions to track compliance with public-access requirements.

Federal agencies are interested in the proposal because it leverages existing infrastructure and would minimize the burden on them, says Susan King, senior vice president of journals publishing at the American Chemical Society. ACS, which publishes C&EN and more than 40 chemistry-related journals, is one of dozens of publishers involved in CHORUS.

A key component of the CHORUS project is a new service called FundRef, which links grants with research publications and data arising from those grants. FundRef is being spearheaded by CrossRef, a nonprofit organization that oversees a global database of metadata for scholarly publications and has enabled publishers to establish links to articles that are cited within reference lists.

FundRef builds on infrastructure that is already being used by scholarly publishers. Publishers will add funding information to the metadata they supply for reference linking. Such metadata captures basic information about an article so that it is searchable and discoverable. Federal agencies can then use the database to track the literature that stems from research they are supporting.

The FundRef database currently includes a limited amount of data from a handful of publishers and funding agencies, but it is expected to grow rapidly as additional publishers add funding information to their metadata.

Federal agencies are excited about the idea because it would allow them to assess the quantity of published articles that arise from their funding. Walter L. Warnick, director of the Office of Scientific & Technical Information at the Department of Energy, says, “Research agencies like DOE are accountable for the results of their expenditures to Congress and to the public. Publications in the peer-reviewed literature represent an important output of those expenses, but they have been difficult to track and quantify until now. Tagging these data in a searchable, standard way is a key step forward.”

By linking grants to publications, Fund­Ref can also help federal agencies analyze the impact of the research they are funding, King says. The system will facilitate the analysis of article-level metrics such as literature citations and Web usage, she says.

Several funding agencies and publishers have previously tried to build such a system independently, notes Geoffrey Bilder, director of strategic initiatives at CrossRef. “But by coming together and agreeing on a standard, we managed to produce a service in just a year,” he says.

CHORUS also intends to facilitate public access to articles. Publishers would permanently host articles on their websites and be responsible for updating and archiving the content. “Through CHORUS, federal agencies and institutional repositories will be able to pull the metadata to link their platforms and repositories to the publicly available article that will be delivered from the publisher’s site,” King notes. Articles would be made available either immediately through open-access models such as author-paid fees or after an embargo period.

But not everyone is in favor of having publishers store, archive, and preserve research articles arising from federally funded research. At a four-day meeting last month hosted by the National Research Council, librarians, universities, researchers, and publishers expressed contrasting views about where the articles should reside.

For the most part, publishers advocate hosting and archiving research articles on their own websites and providing links to that content rather than having the content duplicated in various institutional or federal repositories. Publishers are concerned about the long-term viability and sustainability of such repositories and whether they can effectively protect against piracy. Publishers also claim that repositories would be duplicative and an unnecessary cost to the agencies or institutions hosting them.

Some academic researchers, however, are urging federal agencies to require that papers be deposited in institutional repositories. “The deposit should be immediate, and it should be time-tagged with the date of acceptance of the article,” says Stevan Harnad, a psychology professor and open-access advocate at the University of Quebec, Montreal. Harnad believes that academic institutions are in the best position to verify whether deposits are being made on time.

Members of the academic community, like publishers, are examining ways to partner with federal agencies to help them meet the OSTP directive. One effort, for example, is looking at the feasibility of combining institutional repositories into a virtual repository, which could serve as a distributed system that users would perceive as a single repository, says John C. Vaughn, executive vice president of the Association of American Universities. “Such an approach would build on existing cyberinfrastructure capacity already in place,” he notes.

Although the research community seems to be coming to some consensus around publications arising from federally funded research, the same cannot be said of data arising from such research. OSTP says those data must also be publicly available.

◾ Agencies covered: all federal agencies that fund $100 million or more in scientific research

◾ Guideline for making material freely available: within 12 months of publication

“We have heard, anecdotally, from some faculty reviewers of NSF proposals that they do not know what to look for when they are evaluating a data management plan,” says David Fearon, a data management consultant at Johns Hopkins University. “Some simply check off whether one was included with the proposal.” As a result, reviewers are not providing feedback to grant applicants about the quality of their data management plans or data-sharing efforts, he says.

Funders should consider offering guidance and resources designed specifically for grant reviewers who have to evaluate data management plans, Fearon emphasizes. Other researchers are urging federal agencies to include money in research grants to support data management, as well as open-access publication fees.

Some researchers fear that unless open access is an international effort, U.S. efforts will end up hurting domestic R&D. For example, a recent letter in C&EN questions whether the U.S. would be at a global disadvantage if it is the only country that mandates open access (C&EN, April 22, page 4).

Likewise, John Downing, president of the Association for the Sciences of Limnology & Oceanography, is concerned that “author-paid open access will price out poor scientists while forcing U.S. scientists to subsidize global innovation.”

The issues surrounding publicly available scientific publications and data are not unique to the U.S., and global efforts are under way to address open access. At a three-day meeting late last month in Berlin, heads of some 70 research funding organizations from around the world agreed on an action plan to move more rapidly toward open-access scientific publishing.

The plan includes the adoption of three principles: encouraging researchers to publish in open-access journals, raising awareness of the benefits of open access, and supporting researchers who want to make their published results freely available.

The open-access principles endorsed by the funding organizations, known collectively as the Global Research Council, are not legally binding. But they do send a powerful message that the organizations that fund 80% of the world’s research think open access is important.

Reproducibility
Scientists must take steps to improve reproducibility and reliability of research results
Publishing
Societies and scientists react to open-access Plan S
Policy
National Science Foundation Plans For Open Access
Share X
To send an e-mail to multiple recipients, separate e-mail addresses with a comma, semicolon, or both.
Title: Open-Access Teamwork Takes Off
Author: Britt E. Erickson
Chemical & Engineering News will not share your email address with any other person or company.