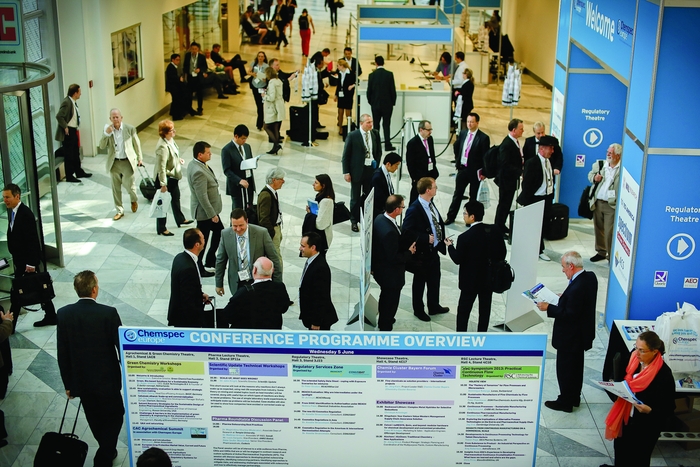 This year’s Chemspec Europe, the annual fine and custom chemicals expo, was held last month at the MOC, an exhibition center in Munich that’s a stone’s throw from trainloads of shiny new cars being dispatched by BMW, a local manufacturing powerhouse.

Just like BMW, European custom manufacturers of agricultural chemicals are enjoying a boost from export markets. Suppliers to the pharmaceutical sector are less positive about their prospects, however, owing to drug patent expirations and a dearth of new products. Nonetheless, executives from contract pharma companies exhibiting at the show said business is steady, with opportunities afoot to capitalize on the drug safety woes of a major Indian firm.

The market for crop protection products, excluding seeds, is worth $47 billion globally and recently has been growing by 7% annually, Nigel L. Uttley of En­gland-based Enigma Marketing Research told industry executives at the Crop Protection Forum, a sold-out event that ran the day before Chemspec opened. The forum was sponsored by the European Fine Chemicals Group, an industry association.

The drivers for growth are well established and aren’t about to change, Uttley told the audience. “It’s the usual culprit of growing global population and increasing sophistication of eating habits and eating more meat. Plus we’ve had a rise in crop prices,” he said.

Harald Rang, BASF’s senior vice president for global crop protection R&D and a speaker at the forum, agreed. Herbicides are still the key play for the company, but seeds and biologicals increasingly have an important role, he added. “Europe is still an interesting market, but Asia is the area where we believe we have the biggest growth potential,” Rang said.

Lanxess’ custom manufacturing subsidiary, Saltigo, which had its usual high-profile exhibition at Chemspec Europe, is also riding the agchem wave. “We see a good agchem year for 2013,” said Wolfgang Schmitz, Saltigo’s managing director. “In the first few months of this year alone, we have acquired half a dozen new agricultural projects.”

In part to support these projects, Lanxess recently committed to spend more than $133 million between 2013 and 2015 to increase fine chemicals production capacity and introduce more automation in its German plants.

“The pharma sector is altogether a more difficult market,” Schmitz said. “I see companies that are dedicated just to pharma that want to explore business opportunities in the agchem area” (C&EN, May 27, page 13). Despite Europe’s tough economic times, Germany remains a good place to do business. “We offer a stable economic environment, and we have the benefit of a very good education system,” Schmitz said.

Contract Chemicals, a $35 million-per-year manufacturer of specialty and fine chemicals based in Prescot, En­gland, anticipates 10% annual growth for the next three years. The firm’s business with agchem customers has been growing at a rate above that for pharma, said Managing Director Tony Bastock.

The firm is investing $4 million to increase its capacity for distillation and bromination reactions for crop protection chemicals as well as other applications. As part of the investment, Contract Chemicals will install a 25-m3 glass-lined vessel, which the company believes is the largest of its kind in the world available for toll manufacture of brominated fine chemicals.

The good news for Contract Chemicals, according to Bastock, is that its ability to compete against Asian fine chemicals makers has improved. “In the 1990s, we weren’t even in the race for some products. Now we see costs rising in India and China,” he said. The result is that major pharma companies are looking at Western suppliers again, he added.

Privately owned pharma and fine chemicals contract manufacturer Chemie Uetikon of Lahr, Germany, doesn’t manufacture agchem products, but it is still operating above its financial targets for the year so far. “The south of Europe has been a bit poor for us. But we have good business already this year in Germany and the U.S.,” said Chairman Heinz Sieger. “We would be remarkably ahead of 2012 if it continued.”

Two-thirds of Chemie Uetikon’s business is in active pharmaceutical ingredients (APIs), mostly small-volume products, with the other third relating to fine chemicals for nonpharma applications. After downsizing between 2008 and 2010 by reducing its workers’ shift times, the firm has reestablished full-time working schedules.

Sieger welcomes the introduction of the European Union’s Falsified Medicines Directive, which, starting in July, will forbid importation into the EU of APIs manufactured outside the region, unless the regulatory authorities in the country of origin certify that the API has been manufactured in accordance with EU quality standards. “But enforcement is now necessary,” he said.

He is also concerned that Europe is not doing enough to ensure the sustainable growth of its chemical industry. More cooperation between industry and regulators in the EU is required, he said.

Like several other fine chemicals executives who spoke with C&EN at Chemspec Europe, Sieger is not worried about the global economic outlook, but he is troubled by the dearth of novel medicines and the effect of the patent cliff on existing production campaigns for patent-protected drugs.

The patent cliff doesn’t seem to be an issue for Isochem, a French fine chemicals producer that claims to have already attracted 10 new projects this year. The firm generated sales in 2012 of $143 million and is on track to exceed ambitious growth targets set at the start of this year, said Business Manager Régis Tripoli.

Thanks to changes in 2012, which included moving its headquarters from central Paris to Vert-Le-Petit, just outside the French capital, Isochem has become far more competitive, Tripoli claimed. “We are more cost-efficient, and we can react quicker” to our customers, he said. “If there is a slowdown, we haven’t seen it yet.”

Mumbai-based Hikal, a producer of agricultural and other fine chemicals, also professes to be enjoying strong growth in 2013. The company is worried, however, about a potential backlash against Asian firms after the big Indian generic drug manufacturer Ranbaxy Laboratories agreed in May to pay a $500 million fine to the U.S. Department of Justice for knowingly manufacturing substandard drugs. 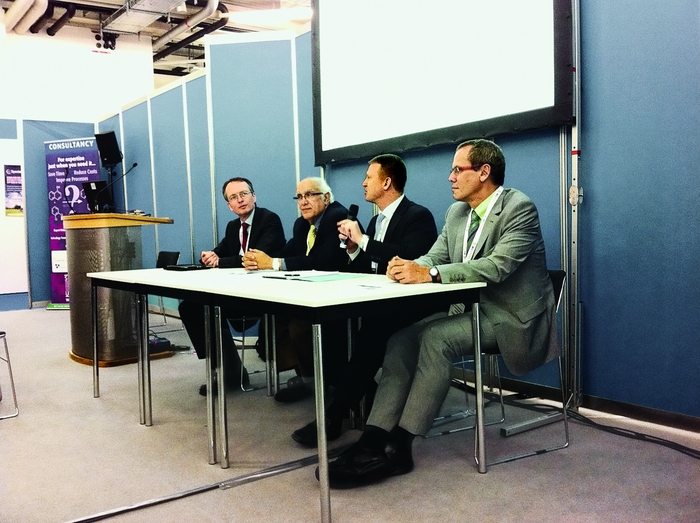 Credit: Alex Scott/C&EN
AMRI’s Garguilo (second from right) discusses the Ranbaxy fraud case at a panel on the outsourcing of pharmaceutical chemical production.

“It’s a dicey situation. A black brush will paint everyone black,” said Avinash Bhagwat, Hikal’s senior general manager for business development. “And it is likely to happen to all non-European and non-U.S. firms. Everyone will look at us suspiciously.”

In the shorter term, customers will audit supplier plants more thoroughly. So for companies that hew closely to the Food & Drug Administration’s current Good Manufacturing Practices (cGMP), the Ranbaxy scandal could eventually turn out to be a benefit, Bhagwat said. But in the meantime, because of Ranbaxy’s size and status, a “large cloud” hangs over the industry, he said.

Other Indian organizations are also watching to see whether Indian contract manufacturers experience fallout from the Ranbaxy case. “Obviously, there is concern,” said Mohit Ganglani, senior assistant director for the Federation of Indian Chambers of Commerce & Industry. He is now waiting to see if other Indian companies’ regulatory compliance stands up to scrutiny.

The pharmaceutical chemicals market was hard to predict even before the Ranbaxy case, according to Louis Garguilo, a vice president at Albany Molecular Research Inc. and a participant on Chemspec’s Pharma Outsourcing Best Practices Panel. “AMRI’s number-one business in 2012 was a large-scale GMP manufacturing facility in New York state. If you asked us a couple of years ago, I don’t know if we would have predicted that,” Garguilo said.

The European Fine Chemicals Group (EFCG), which has a mandate “to achieve a level playing field globally” for European fine chemicals companies, has been calling in recent years for mandatory inspections of Asian fine chemicals facilities because of concerns that some employ fraudulent practices or don’t meet required standards. More stringent operating conditions for Asian firms benefit EFCG’s members by making it difficult or expensive for them to export to Europe.

The Ranbaxy case “is the worst example of fraudulent activity we have seen in recent years following the heparin case in 2008,” said Tony Scott, an adviser to EFCG, whose members include BASF, DSM, and Hovione.

Scott told C&EN that EFCG sent letters to the European Medicines Agency and the European Commission asking what actions they have taken in response to substandard medicines produced by Ranbaxy and sold in Europe. Ranbaxy’s plant in India “will most likely have made fraudulent product for Europe, yet no reaction has yet been reported by any member state. We are, therefore, asking for an explanation,” Scott said.

The organization welcomes the EU’s Falsified Medicines Directive, which Scott described as an important step forward for protecting European patients from fraudulent medicines. Yet he said it still falls short of what is really needed to better protect those patients.

Uncertainties relating to drug regulations coupled with the patent cliff and the Ranbaxy fraud case have only added to the complexity of the pharmaceutical fine chemicals business. Despite the perennial unpredictability of growing crops, it is agricultural chemical producers that have the clearer view of how their market is developing. And as BASF’s Rang said, the good news is that this market “is not only growing like hell, but it’s growing sustainably.”

Business
Anxiety Floats Over Fine Chemicals Sector
Pharmaceuticals
FDA Bans Another Indian Drug Plant
Business
Navigating The Slump In Fine Chemicals
Share X
To send an e-mail to multiple recipients, separate e-mail addresses with a comma, semicolon, or both.
Title: Demand Sprouts For Fine Chemicals
Author: Alex Scott
Chemical & Engineering News will not share your email address with any other person or company.